It Is What It Is

Picking up where I left off....

I failed raw diet.   We did good for about five days.   I was feeling very empowered, with some bumps in the road.   I upgraded to chicken leg quarters because Molly was eating the legs too fast and vomiting due to "gulping" and eating too fast.  (being a good food hound, she was happy to eat the vomited raw meat.    Recycling!)   Ein was struggling with the chicken legs because he has no upper carnassials, so I was toying with getting pre-ground for him.   I ended up getting chicken wings because those are softer bones. 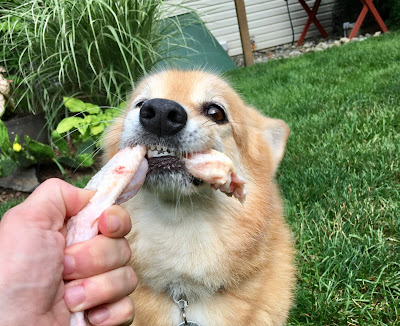 The fifth day we had a rough day.   Since we started the whole thing I was fairly anxious, and literally having trouble sleeping.   It's silly but it was a big change to our routine, I didn't want my dogs to be sick or vomit/diarrhea in the house.   The fifth day Perri had a really bad mucousy poop, and Perri rarely has any GI issues.    Ein struggled even chewing the wing and eventually swallowed it whole which upset me and worried me.   Molly had a vomiting episode even with the large leg quarter.   The thought of going back to kibble was exhilarating and comforting and so I did and I'm happy with that decision.

I got out of work early yesterday, after a really rough week....and took the dogs to a small river park that has a nice wooden dock.   It is further than our usual swimming spot and the frustration with that is always that if somebody is using the dock, I've driven further and the dogs can't play.   We lucked out and got the dock to ourselves. 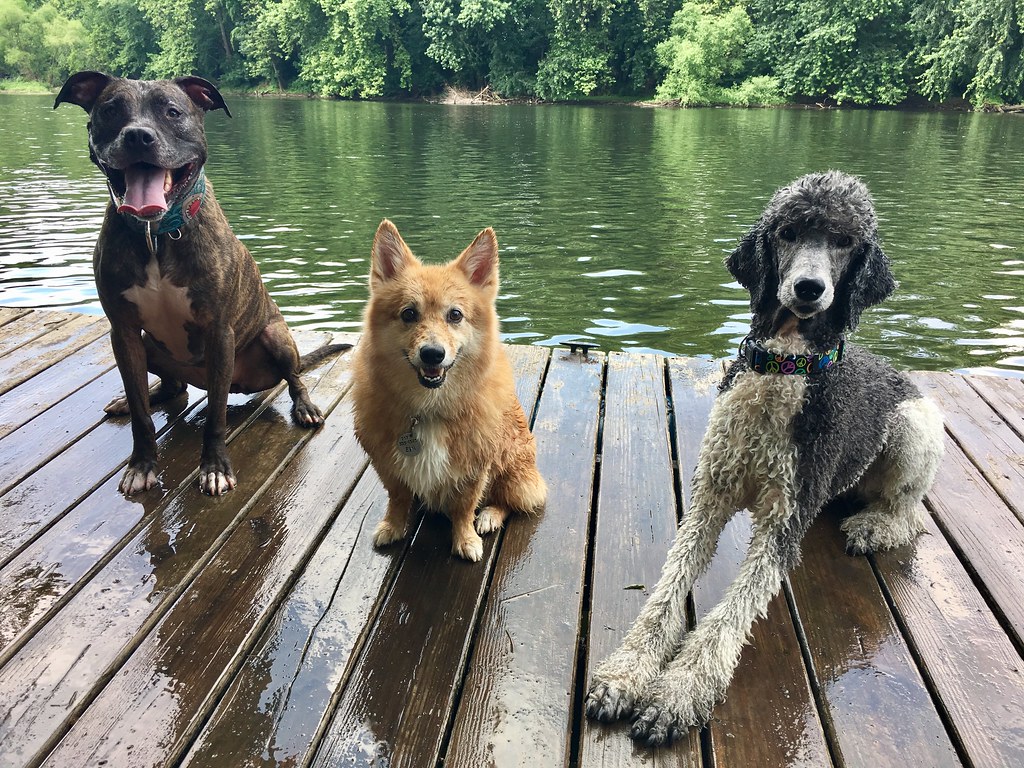 Why do I want Perri to dock jump?   Ein never dock jumped and I never cared.   Maybe it's because Perri is a big dog, maybe it is because she is afraid to do it and that makes me dig in and want her to do it more.   Perri has been afraid of a lot in our time together, and the overcoming of those fears has made her into a much more secure dog for it.   As far as I'm concerned, learning how to throw caution to the wind and dive into water off of a dock can only benefit Perri's confidence. (Plus I have to admit I dream of taking her to a dock diving trial, you don't see too many poodles!)


"oh god, please don't try to make me into a fool like this brindle dog!" 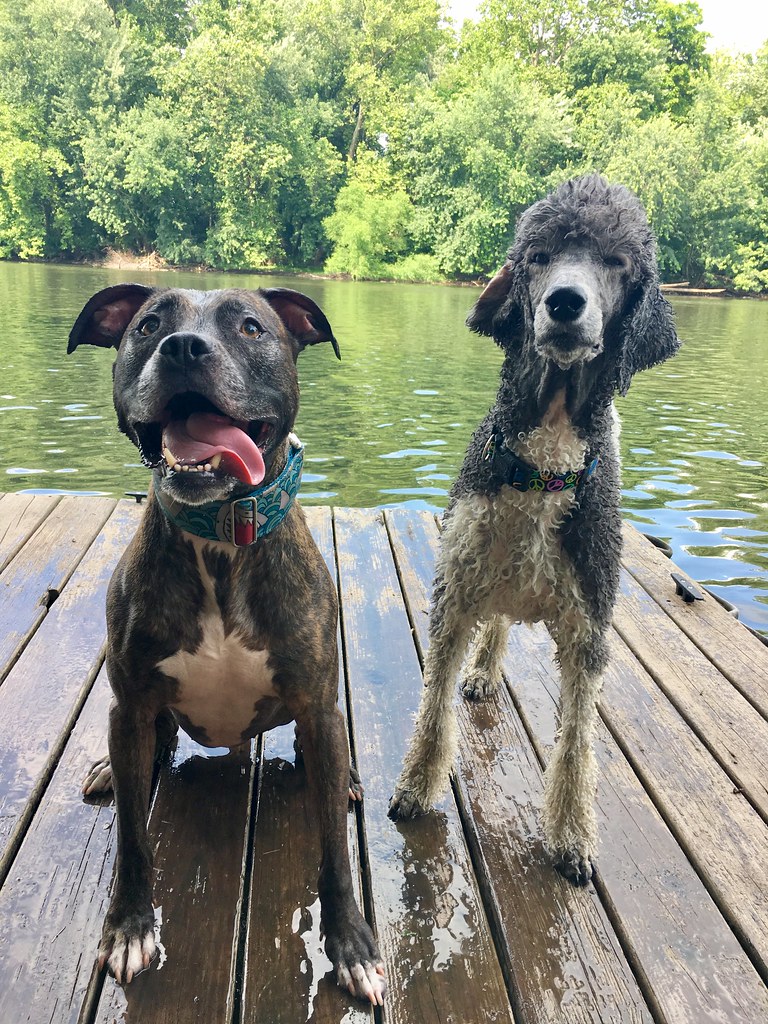 Perri jumped off of a dock for the first time in September 2015, the week before her shoulder injury was officially diagnosed.    I did not attempt dock jumping again with her until a few months ago.   No particular reason other than docks aren't easy to come by and I wasn't committed to the task.   My method with Perri is to take her and Molly onto the dock.   I throw the ball in.   Perri wants the ball because I have Molly restrained, and Perri loves getting Molly's ball and teasing her with it.   She is afraid to jump so she does plenty of cowardly clinging on the side of the dock, squealing and barking at the ball.   I let Molly get close to her to build up more excitement and pressure on Perri, and by then Molly is screeching bloody murder at not being allowed to get her ball.   Yesterday, Perri had a brilliant idea!   She would just run off the dock, and run into the water and get the ball.   No jumping needed.   Wrong!   As soon as she made that choice I let go of Molly's collar and of course Molly snagged up the ball.   After two strikes of that, Perri was sufficiently motivated to jump into the water, squealing like a coward the whole way.


We had a lot of time yesterday to work on this, and Perri eventually got to the point where she was smoothly jumping into the water for a ball throw - some jumps were even without hesitation.   This is very exciting!


"Sure, use me like a whore....whatever just throw the ball and let go of my collar!" 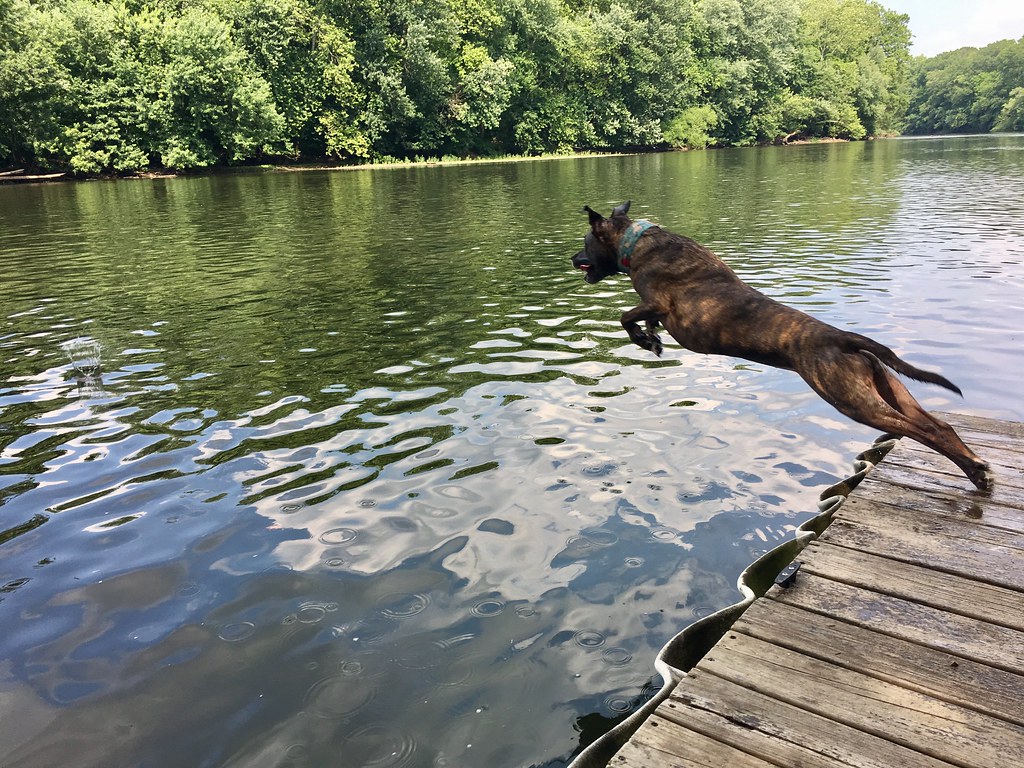 I am excited to continue generalizing this to different docks with Perri and to not have to rely on teasing her with threat of Molly-will-get-the-ball-so-just-f%$&-jump!  I think tomorrow we will try to get some dock time at a lake that is on our way home from the agility trial we are entered in.

"Ahhh, I deserve to roll in some dead earthworms for being so brave, right?" 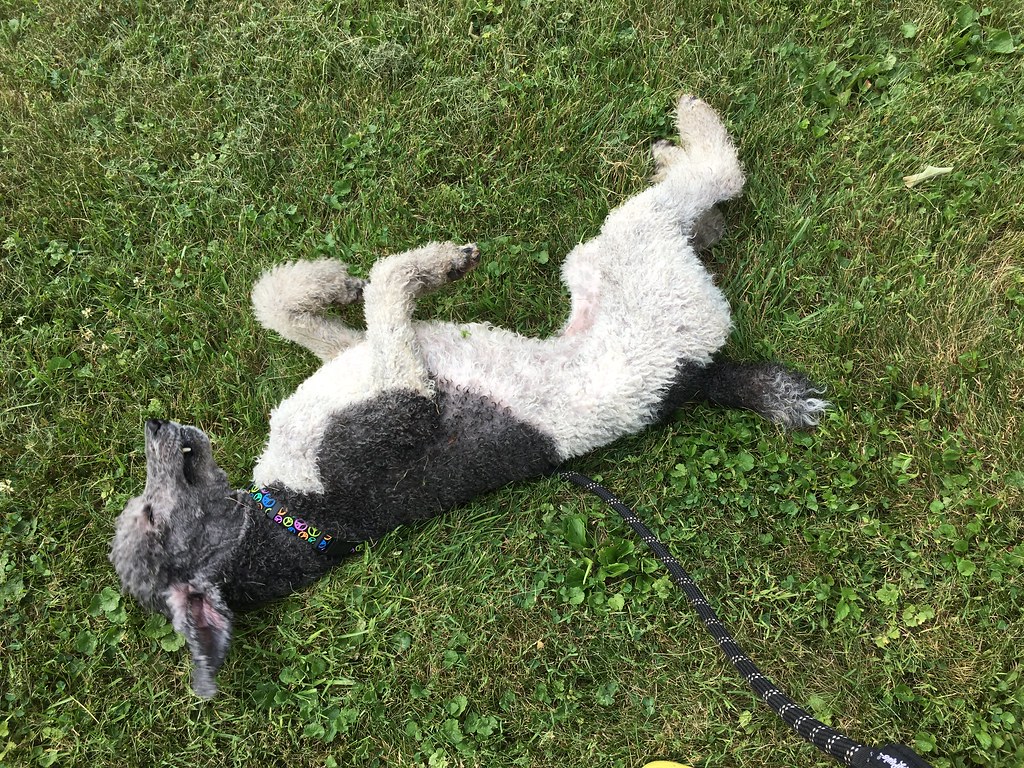 Bolstered by Perri's enjoyment of jump exercises, I finally ordered Susan Salo's jump grid workbook for some more cool training exercises to do with Perri.  (Bonus if she stops jumping with Big Air, "like a poodle.")   Last night I set a grid up in the yard for Perri, thinking that some do-able jump work would be enjoyable and confidence building for her.  We did a minimal amount of reps, I made adjustments to the grid we were using based on Perri's needs, took breaks often - it was a really nice time.   Perri never disengaged, and was always interested in what we were doing and happy to do the work.   That's happy making for me! 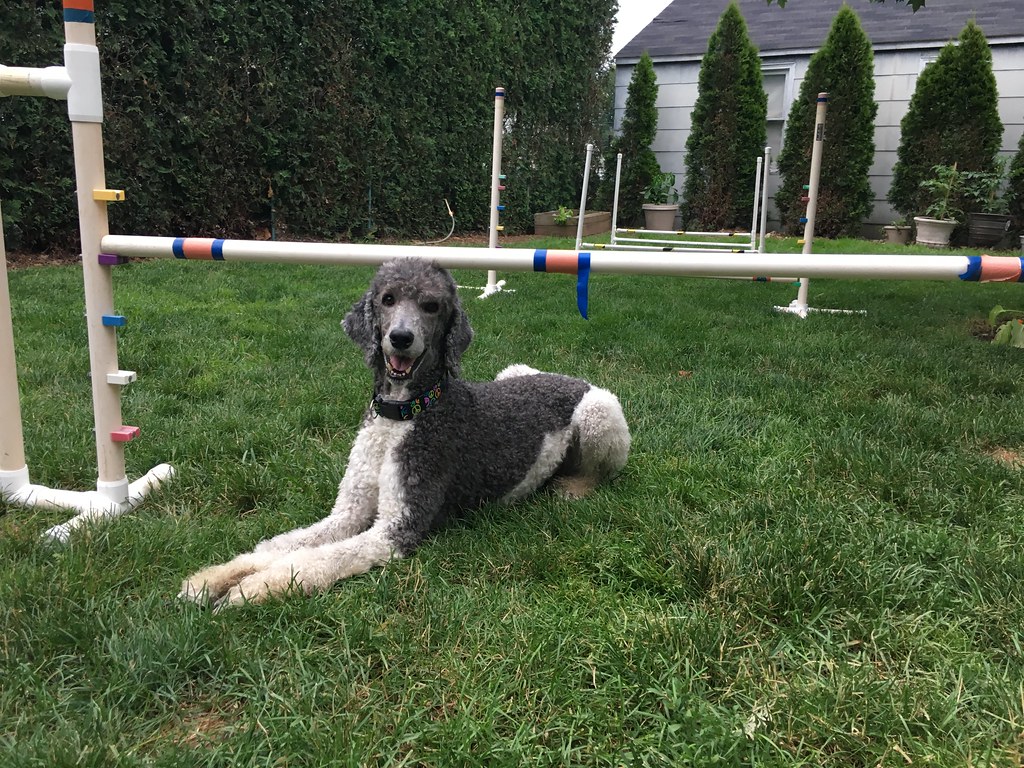 This year has been derailed for me quite a few times and has turned out nothing like I expected it would at the end of 2016.   Molly's very existence in my life has been threatened by lymphoma (and reclaimed!) and, secondary to that, our agility journey is a huge question mark.   I began doing agility to help myself with seasonal affective disorder, I used to suffer quite badly from it in the winter time.   Agility was chosen as a means to help myself heal and it still continues to serve that purpose.   It's "just a game" apparently, but for me it has been a therapy, a means for personal growth and bond with my dogs and has led me to meet so many people that I never would have known.   The thought of no longer having agility in my life due to my partner being sick or unsound is devastating to me.   Is agility more important than my dog Molly, is she just a means for me to play this game that I love?   Absolutely not.   Is agility more important than my relationship with Perri and helping her be the best she can be?   I will not allow that.

I love agility so much because of what playing this game did for Molly and I.   It made me fall in love with and respect a dog that I did not really like.   And I have decided that I need to stop deciding where my journey with Perri is supposed to go.   Just like I did with Molly.   I am giving up on the human concept of linear progress with Perri.   Perri started off so promising, then she injured her shoulder.   We rehabbed the shoulder.   It took a while to return to normal function, nearly an entire year.   But she did, she followed the path of linear progress and at the end of last year, she was the best she has ever been.   But this year Perri's progress detoured in the most confusing and upsetting way and I am tired of mourning that and agonizing about it.   I am tired of making Perri a project and trying to brainstorm up Plan A-Z on how to improve her strange little brain.

Perri is happy when I am happy.   It's simple, stupid.   So I aim to go forth and be happy with the next half of this year.   After all, what choice do I have?   My sister always says, "It is what it is."

Email ThisBlogThis!Share to TwitterShare to FacebookShare to Pinterest
Labels: agility, dock diving, ein, it's all about the journey, molly, perri