This weekend's plans were looking fun: USDAA on Saturday, mine and Molly's very first time in P3.   Sunday was to be barn hunt training in preparation for our October trial.

But Wednesday night Molly started bothering me to go outside.   She ran out in the pouring ran and started eating grass, eating grass.   I got frustrated with her and went out in the rain, took her collar and marched her back under the porch to come inside....she ran away from me and threw up her entire dinner, and then retched some more.   A few hours later she seemed to feel better, so we gave her her evening Kong.   Molly can be a "pukey" dog but if she has an appetite we generally just carry on as normal with her.   One AM she threw up everything that she ate from the Kong, she threw up more outside.   Thursday morning it was clear she did not feel well, and I decided to withhold food.   I tried to give her a Pepcid but she refused to eat the small amount of cheese that I had hidden it in.   In hindsight I wish I had forced her to eat it.

I came home to a liquid diarrhea mess and several more piles of vomit throughout the house.   I convinced Molly to eat a small bit of plain turkey but she soon refused anymore than about two bites.   She absolutely refused to eat pills wrapped in turkey so I had to shove them down.   Very unusual, the only time Molly lost her appetite was years ago when I was a zombie due to strep throat and left her bag of kibble sitting on the floor and went to sleep for about 14 hours straight.   She ripped the bag open and buffeted Molly style - and so that evening when I gave her dinner, she didn't want to eat it.   Because she was packed solid with food already!  I panicked then because Molly never ever refuses food...but when I found the dog food bag all was clear.    But I digress.

Anyway.  Molly never refuses food.   We have had two intractable diarrhea episodes this year (brought on by my own overindulgence and resolved with Flagyl) and most recently, one strange episode of vomiting and nausea that she bounced back from in less than 24 hours with fasting and Pepcid.   This most recent episode was unusual and fast becoming scary.   It got much worse through the evening.   It was a beautiful day outside but I couldn't do much but sit at home and watch Molly and worry.   She did not vomit or have anymore diarrhea, but she was so uncomfortable.   She had episodes of shuddering, of panting.   She would get up and just stand there staring off into space, she would stretch in downward dog or the reverse way.   She would ask to go outside but then just stand in the yard like she had no idea where or who she was.   It worsened and worsened through the night and every time she would lay down and relax or drift off and I thought the medicine I forced down her throat was finally helping her feel better, she was up again and stretching and uncomfortable.   She lay down for a long while but at 1AM she got back up and stretched downward dog and just stood there, frozen.   She was shaking.   I knew at 6am I had to go to work.   I knew that if she was in this state at that time I would be a complete wreck if I had to leave her home all day feeling this way, and possibly (and likely) worsening.    So we went to the emergency vet.

I called ahead.   Always do that when going to the emergency vet.   You can get a lot of the formalities and paperwork out of the way, and the staff know what's coming.   There was nothing crazy going on with Molly.   Gastroenteritis.  Subcutaneous fluids (I do love SubQ fluids, feeling that big cold hump below the skin and petting it - weirdo.) and an anti nausea injection.   We were sent home with more Flagyl, orders to continue the Pepcid/Flagyl combo that I had started Molly on.   Molly walked out the door with more of her usual peppy swagger than we came in with.   I got about two hours of sleep before work.   Molly was not good in the morning.   I was told to fast her, but I thought for sure with the fluids and injection she would happily eat her medicine in a Pill Pocket.   No.   And then she even refused butter.    I again had to force the pills down.  Really scary for me, because I knew it meant she was feeling very bad.   When I left her she was laying on my living room floor, so uncomfortable she did not even want to be on the couch.   She was just laying there looking miserable and confused.

When I got home from work the difference was like night and day.   I got the plain turkey out of the fridge and offered it to her and she sharked it right up!   Gave her a little more.   She ate it all and then went and slept for a few hours.   Still very wiped out but with the return of the appetite I was feeling great!    She took her pills with no issue hidden in her "bland diet" food.   She ate her whole Kong (stuffed with more plain food.)   She then stole Perri's food while I was shooing away a door to door salesman!   Yep, she's back!

I obviously still scratched our runs from the USDAA trial.   Since the trial was very close to me, I went anyway to cheer on our friends.   Our friend Sly the border collie had a really nice day and got his long sought after last Standard Q needed for his Performance Dog title.  (as well as his P1 Gambler and P1 Standard title).   Much celebrating!

I kept Perri in the car all day and did some work on simply approaching the trial building.   I did what I used to do with Molly when we would be in a trial that she would shoot over threshold if we went into the building too quickly.   I got Perri out of the car and stood a few feet from the car.   And I waited for her to orient to me.   Praise and food when she did.   I observed Perri having a very difficult time even as soon as she got out of the car.   Hypervigilance and a long delay in being able to orient to me.   This is a big deal and something that Perri and I need to work through.   How can I expect Perri to be confident and focus in the ring otherwise?   We did this probably three or four times throughout the day.   Often I rewarded Perri with retreat from the trial building as well as food.   No real improvement today, just a lot of information for me.

One time Perri was particularly lost in scanning and our friend Donna came out of the trial building, Perri saw her from far away and became over joyed and wanted to dash towards Donna.   I love this, because in a moment when Perri was lost and overwhelmed by the environment, the "environment" produced a much loved friend.   It is a bit like how I take her into the building and get people to pet her, but in this case, Perri was stationary and allowed to take things in on her own rather than having me manipulating what happened.   I did not plan for Donna to walk into Perri's line of vision, it just happened - and I think it was a very good thing.

More work like this.   I am hopeful for the fluoxetine on board, that when it really begins to take effect and hopefully help Perri, that it can aide her comfort level and ownership of her environment.

After the trial I took Perri on a nice hour long walk at a nearby and favorite lake park.   Not the way I expected our weekend to go, but all worked out well in the end. 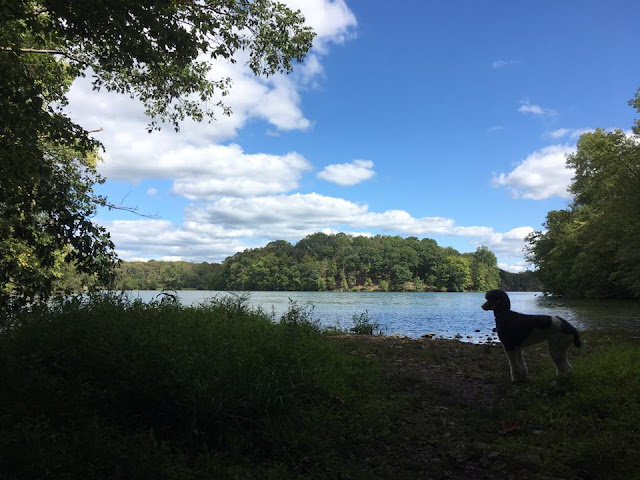 Posted by dogbird daily at 6:16 PM