Somewhere between last year and this one, my "I'm never doing NACSW again!" turned into ... entering Perri in an NW1. That's what I do! Perri has been successful in Performance Scent Dog trials and there was a part of me that wanted to see if we could conquer what defeated us last year.

Spoiler alert: we did not title! But we had a very nice experience. The trial was well almost three weeks ago, but I wanted to wait for our videos and photos to be available before I wrote about our day.

The weather gods were smiling on us, sort of. The day was in the low 50s and it was downright cold due to...wind chill. Cold is good, Perri likes to search in the cold! It was very windy most of the day, so that made me feel a little bit nervous since Perri would be working against some added challenge in her two weakest elements.

And we had to start with Exteriors.

At least it wasn't Vehicles! The search was on gravel, some tables, chairs, shovels, etc to be searched. Perri had a moment of vacancy but quickly reengaged with the search and sourced, earning her a Pronounced and passing Exteriors in 36 seconds. I was thrilled! In comparison with last year's trial, with a 2.47 minute Exterior search....talk about improved! 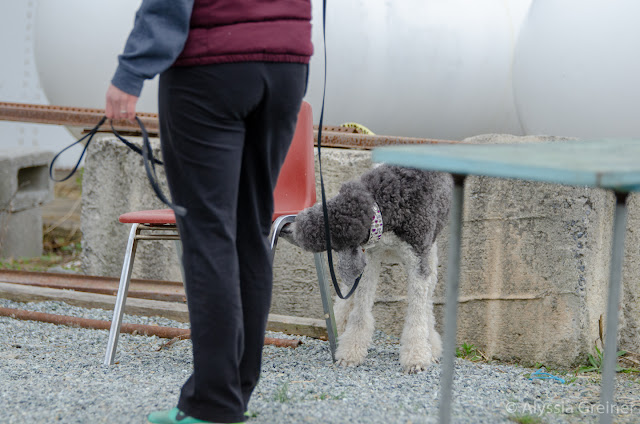 We went straight to Containers. I felt invincible. Containers is Perri's best element and she is the best poodle ever and never ever false alerts and this was going to be our "gimme" search for the trial...........
And then she false alerted in Containers and we failed our NW1 because of Containers. I was absolutely astonished. I could have fallen over when I heard the judge say "No". I couldn't believe it. Even Perri looks like she couldn't believe the judge saying "No" in the video! I still can't believe it, nearly three weeks later! I don't understand what happened, I still don't. I have watched my video. I have thought about it. I have been honest and if I could blame my handling I would. I see that Perri never checked the hot box. Her search pattern is disorganized. None of those things are out of her ordinary. She did not seem overly stressed, but maybe she was stressed and due to her disorganized searching and not finding odor she falsed. None of those things is really like Perri to do. I have had friends who are far more experienced than me say maybe she alerted on drool or maybe she was fringing. Maybe? Nothing is impossible? But I do not actually know what happened in that room. Before that search if you said "Bet your life that Perri is correct about this box" I would have done so because Perri is so meticulous and careful and Always Right about Containers. I just don't know! Even when I showed Perri the correct box, she did not seem impressed by it.

The "all or nothing" of NACSW trials is a very challenging factor indeed and it can be demotivating.
We had a very long wait until our afternoon searches. Searches that would "count for nothing". I had a nice easy crime novel read on my Kindle and I passed the time away with that. I really did not feel like doing the afternoon searches, especially since one of them was Vehicles. Perri does not enjoy searching Vehicles.

But, we persisted! We started with Vehicles. The wind was blowing toward us. Perri sources in about 14 seconds but does not alert. And then it was up and down the vehicles. The odor was in the wheel spokes of the middle vehicle. It was blowing all over the red vehicle. Perri knew it too, she checked it out. Eventually she finally was adamant about where the odor was and I called alert. I kept relaxed and reminded myself we had 3 minutes. Our time was 2.14 minutes. We passed Vehicles for our first time! How unbelievable to pass Exteriors and Vehicles and not Containers. Crazy! 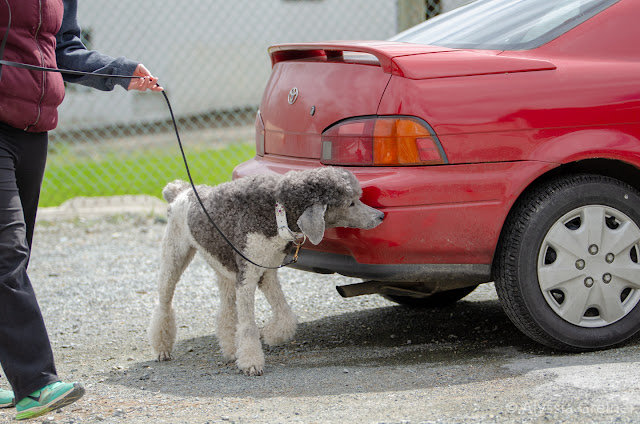 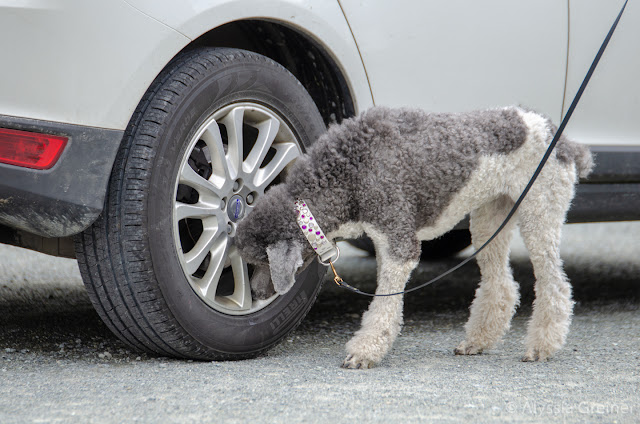 We finished our day with Interiors. No videos or photos since that is not permitted in the Interior element by NACSW (eye roll. Haha.)
The search was in an industrial kitchen type area. There were pantry type items and food prep items available to be sniffed. Counter tops and a table top. The search area was wide open with access to the rest of the fire hall. I chose to do my search off leash. Perri was mostly focused for her search, her normal meticulous self. She did exit the boundaries of the search and go off toward the rest of the firehall, but she came back promptly when I called her. On her second pass over the search area she was really evaluating the pantry shelves and then went and alerted on an area that she had checked before (and that I had made a note of.) It was a large metal rack for food trays and the hide was in the little wheel on the bottom.

Another 3/4 day for Perri in NW1 but the day felt much better to me! I was really bummed that we had not titled, especially since we kicked butt in all the tougher elements!

Now the moment of truth - the Award Ceremony. At our trial last year I was disgusted by the poor attitude of one particular judge and by the trial experience in general. This year's experience was the exact opposite. We were allowed to leave the trial site, nobody was patrolling and making sure we followed All!The!Rules! At the award ceremony we were given advice on leash handling and other helpful pointers, all with an indulgent kind tone that made me feel like the judges knew we were at the NW1 level. That means a lot because while there were likely handlers there who are very experienced and have dogs up in the Elite level, I am still a true Level 1 handler. One of the judges in particular handles dogs professionally and he took the time to say that he loves to judge and watch K9 Nosework because he can see the love we all have for our dogs in handling and training them. A stark contrast to a different judge from last year who also handles dogs professionally and uses that platform to look down on competitors.

I know. I sure can hold a grudge.

People deserve to be respected and so do our dogs. That's what I think is important. And I felt respected and honored to be at that Nosework trial. We failed NW1 a second time but I was so happy that we did our last two searches and that my dog was working stronger than she was last year. I have learned to handle a leash! I have learned not to panic because of the clock. And after this year's trial, I feel nothing but anticipation for the next time Perri and I try NW1. Bring it on. 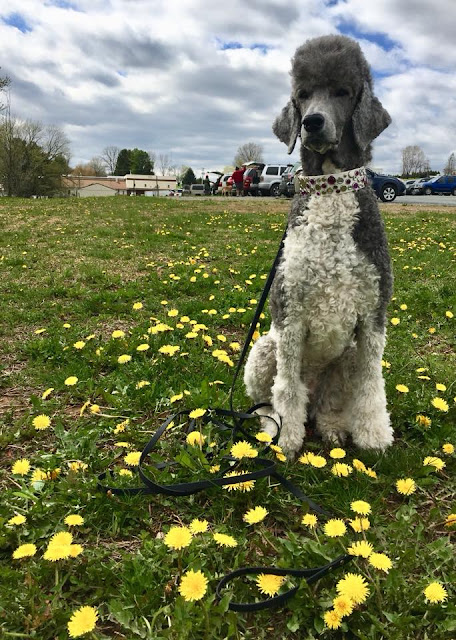 Posted by dogbird daily at 7:13 PM