I have made a ton of changes for Perri lately and the positive progress that was trickling in this year has begun to flow.

At the beginning of this year I wrote this post about our progress with fluoxetine. I was feeling lukewarm about the flatness I would see in Perri, but when I added salmon oil to her diet I noticed more energy. This was indeed a temporary and probably coincidental change. Perri continued to be flat, slow to rouse into play and exhausted far more easily than she used to be by most any activity. About three weeks ago, I told our behaviorist that I would like to wean Perri off of the fluoxetine and possibly try something else. Our instructions were to wean down to 10mg and keep Perri on that dose until our appointment to see how she does on that dose. We returned to 10mg on April 16th.

Last weekend I had Perri adjusted by her chiropractor. Jaw out and some cervical misalignments. We visited because I wanted to discuss the spasming that I often see in Perri's lower back, check for any adjustments that needed to be done and find out if I can be doing anything more to help Perri's spine feel more comfortable. Of course, all of the adjustments were needed "up higher"! In addition to the active stretches I had been already doing, we were given a few more. I also purchased a Back on Track mesh blanket for Perri. I have heard very good things about these jackets and I feel that Perri can benefit.

So, a lot of good thoughtful changes for Perri. I am also pursuing retesting Perri's thyroid levels, as she tested a "low normal" in December of last year. I have added a probiotic to Perri's diet, the same type that I use for Molly. A happy gut is a happy dog.

And Perri is a happy dog. I started to notice increased silliness within less of a week of decreasing the fluoxetine. Just little things. Flinging a toy up in the air and doing a ridiculous spin for one of Vince's workers. Actual interest and demand in play time with her standard poodle friend Zoe. And just in the last week, we had one of Perri's famous pounce zoom fests in the back yard, it has been a while. Last Monday in agility class Perri turned it on like I have not seen from her in a long time. She did both of her "turns" with really nice motivation, desire for her ball and actual fast and intense weave poles (with a pop at the 10th weave and a restart where she went even faster after being asked to do them a second time rather than crumbling mentally.)

Yesterday I volunteered with a friend of mine who was holding a lure coursing ring to raise money for a rescue at a large dog event held in my area. I felt apprehensive about letting Perri course. I was really struggling with making the Right Decision. On one hand, Molly has gone lame coursing three times now and I knew that Perri had an agility run the day after at a trial. I am trying so very hard to narrow down the activities I do with my dogs and be more focused. But on the other hand, I love how Perri opens up, de-stresses and gives in to raw prey drive in coursing. In the end I made the decision to let Perri run the course two times, once at the beginning of the day and the next time four long hours later at the end of the event. (It was very popular, we had a line 10-15 dogs deep the entire day!) She was full on BagBrain and each time she ran, Zoe poodle got to run with her (and Zoe did a great job following Perri and/or the bag the entire time, she did not leave or get distracted by anything. A great start!) 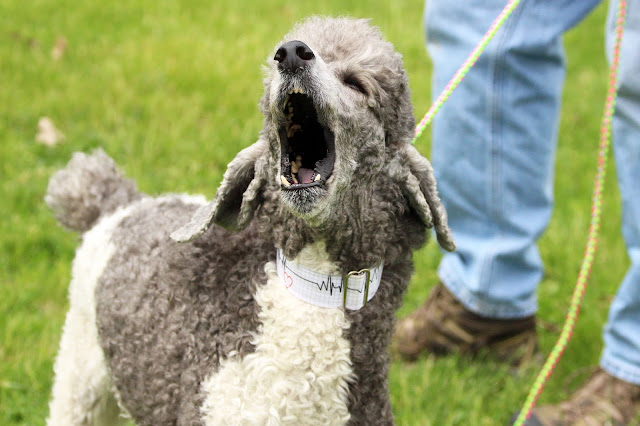 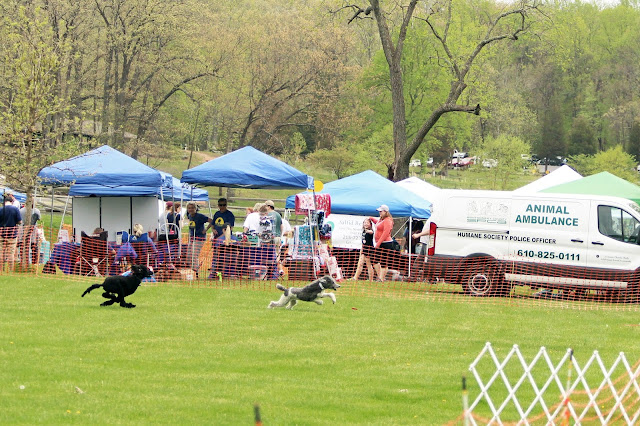 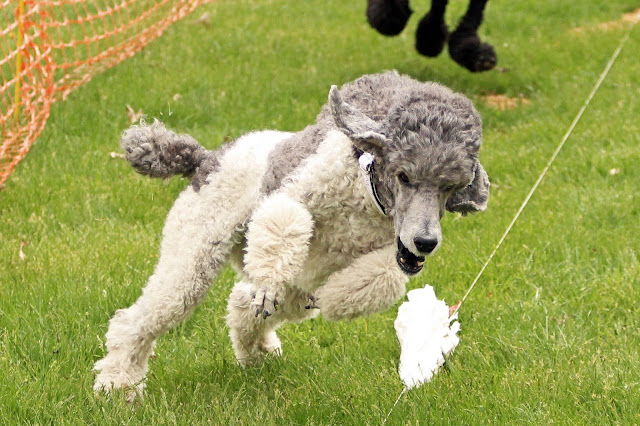 I was very nervous that Perri would be too tired for her agility run today. We have had a really really nice week since that beautiful agility class on Monday. On the prior dose of fluoxetine, Perri would typically be wiped out and it would be a big ??? how an agility trial would go the next day. It doesn't help that it was naughty of me to enter today's trial in the first place. It was for pure social reasons that I entered, my friend was going to be there and the original plan was to enter Molly but then that bonehead went and ripped her toenail off at the lake a few weeks ago so....hey I do have another dog, right?! So, I entered Snooker with Perri.

But Perri was....great! The Snooker course was laid out so that in order to get the best flow I ran to the back of the ring with her to use our first red, rather than starting on a "red" on the start line. On our way out there she got distracted by a male ring crew but did call off of him fairly quickly. We ran our course and there were some angles that I was fretting I would lose her on, as well as a jump wrap but she really ran her little heart out and was fast and happy! I was so proud of her and it felt awesome. We started the close and it was a diagonal line from 2-the first jump of 5. 5 was a 180 jump combo. Well I lost Perri to visiting a ring crew who also is a friend of ours, how could Perri not say "hi"? I was going over in my mind if I should be trying to recollect Perri back around the jump to try to earn enough points, or just ignore it and run out the finish and forget #5 but I ended up trying to get her and reset her. It turned out to be a not horrible choice, although I am aware it was not the ideal choice. I can't quite remember what happened but I know that Perri was like "Haha you're weird I'll just take the jump!" and then we had a merry happy little race to the exit and she was mighty proud of herself and quite happy and that is what matters! On reflection, I'm really proud of her for not freezing up when I confused her by trying to bring her back to the correct side of the jump, and just making a decision instead.  She was not sure what I wanted, but there was a jump in front of her so she took it! I am okay with that. Very unlike her and very confident! I did notice that Perri was very bothered by us getting to the leash chair at the end. I need to work on a more positive association with ending the run and getting equipment put back on her.

After Perri's run I let her sit in my lap for a while. Perri had a very good day of behavior fear reactivity-wise as well. Something to discuss with our behaviorist. Perri saw a very drivey doberman yanking on a tug toy walk across the crating area, she had eyes on a german shepherd trotting briskly along but she actually LAT'd to me and then a bearded shepherd was crated next to us and warming up for a run. Perri noticed it but reoriented to me quietly. And I was paying big for all of this with bits of dehydrated lamb lung. And I am proud of myself because I interrupted a conversation with a friend to say that Perri had been very successful and I thought she should go out to the car before something pushed her too far and she had an explosion at a dog.
I am very excited about Perri's self assurance around three situations that would have triggered fear reactivity behavior in her. I have no doubt she was still concerned about all three dogs, but she trusted me today and did not feel the need to freak out and warn those dogs away from her.

I am so optimistic and so terrified it will all fall apart again. That's our journey, I am learning to embrace it and not resent it. It's easy to say that now when we are progressing in the right direction!
Posted by dogbird daily at 3:55 PM

Email ThisBlogThis!Share to TwitterShare to FacebookShare to Pinterest
Labels: agility, it's all about the journey, lure coursing, medication, perri, trials, usdaa