Ein and I have been steadily plugging away in CDSP Obedience, a trial every few months in attempt to earn his CDX-C title. First, we went to matches. Then we started trialing January of last year and we NQd. We tried again in May of last year and NQd two times under a very grouchy judge at a very crowded and not-for-Ein trial site. After that I thought maybe this is not for Ein, maybe he is just getting too old. By last autumn I started peeking at the trial calender now and then, and I saw a trial with a much loved rally judge and thought it was worth trying a new to us trial site. There were two trials and Ein NQd one and squeaked by with his first Open Q and a score in the 170s. I was so thrilled, you would think it was a perfect 200! And that gave me hope. And I decided we would stick to this particular trial site since the ring layout made Ein comfortable. This past January we NQd both trials. All the NQs were for random naughty things, it seemed like a different thing each trial.

He was naughty! His habit of "front? what is front?" that started this January has persisted. But not NQ naughty.

Trial one: heel free was fine. Running broad jump good but attempted to squirrel away to heel position with no front - I gave him a front cue since that is points off but less points off than a no front. Drop on recall. I gave him a very firm stay command and turned to face him. (no anticipating, please!) Rock solid stay, good boy! Retrieve on flat - great! Retrieve over high....here he went! Picked the dumbbell up by the bell - when has he ever done that?! Never! And to his credit he carried it to me and over the high jump and dropped it at my feet. That's 5 points off but not an NQ. (I did not know that and thought we blew it.) Go out he does this weird thing sometimes where he runs out to the stanchion to the right of the center one. Whatever dude, it's points off. Our second leg with a 180!! Movin up into the 180s!!

Trial two: heel free fine again. Running broad jump about the same with the naughty no front attempt. Drop on recall, another good boy stay! and naughty no front. I cued him front and he ignored me but then sat at almost my right side on front position. The retrieves were both good but on both run outs he was giving glances at spectators and the judge, and sometimes when he does that he loses track of the dumbbell and will nose touch it and come back to me. We have done a lot of work on this issue and it paid off, he retrieved both times! The go out he stopped short and I cued him to sit anyway (just points off.) and he laid down. More points off but we survived with a 189! 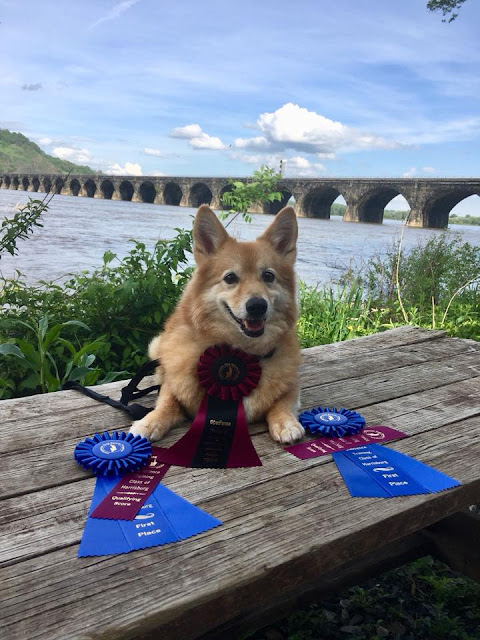 I am so proud of him and so honored to be in the ring with a dog of his age. At the pinning for each trial the judges could not resist telling everyone in attendance how old Ein was and everybody cheered for him. He is such a special partner. My plan for now is to continue to play in Open C class (finally out of Open A!!). Ein really loves the exercises, especially the retrieve exercises. At this time I do not plan to continue on to Utility but who knows, I could be sitting here when this dog is 18 years old typing about his Utility Dog title. Anything is possible! In reality, I don't think that Ein would like the more touchy feely Stand for Exam that Utility requires, and I have always considered it a dead end for that reason.

Aaaaaaand Molly played too! She earned her third leg in Starter Novice (Heel on Lead, Figure 8 on Lead, Stand with Distraction (judge walks around.), Recall (Half length of ring) and Sit-Stay while Handler gets leash. Molly did a very nice job but she was a little bit stressy with some lagging issues on Figure 8 and two no sits between both heeling exercises so we got a 190. Still very respectable!
Since Molly titled and I had prepared her for the exercises in regular Novice class, I moved her up for the second trial. (Heel on Lead, Off Lead Figure 8, Moving Stand for Exam, Recall over Bar Jump, Sit-Stay (Handler Walks Around Ring.) The heeling was okay but I was very supportive of Molly. I miss my sharp little heeler that I had in January and it shows that I have slacked off on a lot of the motivational work I was doing with Molly's heeling. I'm going to put more work into that so we can have a nicer time for her last two Novice legs! The other exercises were uneventful and she was a Very Good Girl with no errors, I was especially pleased with her Moving Stand for Exam.

Looking forwards to our next Obedience trial in a few months, and it's time to really get serious about working on training Molly for Open.