Day at the Fairgrounds

I have been out of commision for a few weeks because my laptop stopped working. Thankfully it was an under-$100 quick fix that did not involve "your laptop is screwed, better buy a new one." and I'm back in business. (I hate blogging off of my smart phone or tablet!)

So with Molly's toe arthritis and the limited abilities of my three dog team to play agility (simply meaning, I can't do All The Venues All The Weekends! anymore.), I accepted that we would not be visiting the East Freehold Showgrounds for a trial in a long long time. Because: no more lure coursing for Molly and no more outdoor AKC Agility.

So when I saw an all breed conformation show on Memorial Day weekend offering Canine Good Citizen tests, Trick Dog tests and NADD Dock Diving at the Showgrounds, one of my favorite trial sites...I jumped on the opportunity! I had been looking for a trick dog test for my friend's young dog to test for her Novice Trick Dog title, as we had been preparing her for it. And on the flip side, my friend has been teasing me into giving Ein a third try at his Canine Good Citizen test. After all, third time's the charm? Ein has failed the CGC twice. Both girldogs have their CGCs and I attempted to test Ein twice over the years when each girl took her test. First at Molly's test where he failed any step that involved contact with a human, and secondly at Perri's test where he nearly passed except for the grooming step.

We arrived and went to check on the Dock schedule. It was around 930 in the morning and the CGC testing was running from 10-12 so plenty of time there. This was mine and Molly's first time jumping with NADD (North American Diving Dogs) and I learned that this event was being run "cluster style." This meant that if you pre-register for "Splashes", that you have no set time for your jumps. You show up in the morning and write your name into whatever time slots work for your day (to minimize conflicts.) Unfortunately for me, getting there a half hour after the event began meant that there were no available time slots until 1 or 2pm. You know, right when the Trick Dog testing was available. Yay, conflicts!

After that we walked over to the Canine Good Citizen ring and testing was already under way. I got Ein's name on the sign up sheet for his CGC as well as the Trick Dog schedule! Zoe Poodle also got signed up for her Novice Trick test. I felt a little nervous going into the test, mostly because of the Grooming step. Ein accepted a friendly stranger, sat politely for petting and grooming. The tester was very respectful and let Ein get to know her and approached him from the side and let him sniff the brush. She also asked him for his paw rather than taking it (upon my request. Ein has arthritic feet and he is happy to "shake" when asked.) Loose leash walking and walking through a crowd, no problem! Sit, Down, Stay and Come - no problem! Reacting to another dog (ignored her!) and reacting to distractions (wheel cart rolled by him and clipboard dropped, he glanced at the distractions but back at me.) And finally Supervised Separation, she kept him in the ring and I walked up through the breed rings for three minutes during that time. It is official, The Finest Einest CGC!

After the day's first victory, we returned to the car camp and put Ein in his crate for a rest. Now it was Zoe's turn for her Novice Trick Dog. Since Zoe has previously passed her Canine Good Citizen, for Novice she had to do five tricks. (If the dog has no CGC they must do 10 tricks from the Novice list.) Zoe did: Shake Paw, 4 Paws on Platform, 2 Paws Up, Get in Box and Spin. What I just love about AKC's trick dog program is how it encourages people who may never have done a competition with their dog or who are too intimidated by obedience or rally-o to get out there with their dog, train tricks and earn a title. I love it. That was exactly the case for our friend's Zoe and Mary, the Novice Trick Dog title tested them on skills we have been training and the challenge was accessible to them. Really exciting! 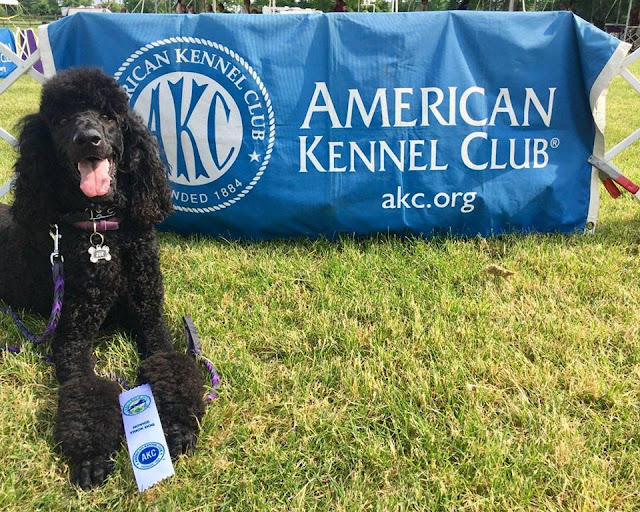 The dock diving schedule was running late so we decided to try to get Ein in for his Trick Dog tests.
I chose to do the Novice, Intermediate and Advanced levels with Ein. What a busy day!

Once again, I have been so excited to do AKC's Trick Dog testing with Ein since I heard of it. I did the mail in titling with Do More With Your Dog with Perri, and she has her Novice and Intermediate titles, but it was so much more appealing to me to go in person with my dog and show off the tricks.
For Novice, since Ein passed his CGC in the morning, he only had to do 5 Tricks. We did: 2 Paws Up, 4 Paws on Platform, Hold It, Shake and Hand Target.


In Intermediate, things got a little intense! The tricks that went according to plan were: Balance treat on nose, Fetch it (dumbbell), Game (Manipulate puzzle toy or kong), Hand Signals (Sit, Down, Come), Leg Weave, Roll Over, Handlers choice "Heeling with AutoSit", Handlers Choice "Right and Left Finishes").
The tricks that did not go according to plan were that I was planning on using Ein's dumbbell carry for the "Carry" trick - but the tester would not allow me to use any object but a basket. So that was out, as Ein had not generalized his object hold to a basket. I wanted to do "Catch" instead, where the dog must catch a treat or a toy but geriatric Ein has lost his ability to catch so that was a total fail. The tester was very kind and told me to go take a break with Ein and return with a trick we could do. Ein was getting hot and there were people waiting for their turn to do their tricks so, this was a good thing.
I couldn't believe it - one trick away! I was totally flustered. Mary and I went back to the car, gave Ein some water and I petted him and told him he was a good boy. I tried to get him to carry the basket, there was lots of attempts to revive his ability to catch treats and Ein was happy to eat all 400 treats I threw at him but his skills grew no more reliable. We tried "Crawl" but with Ein's hips as they are, it is too tiring for him to go the 5 foot distance required reliably and the tester was by the book. "go Find your handler" was an appealing option but I was told we could not do that since we were in an outdoor ring. We tried to get him to jump through my arms circled as a hoop! Paws up on handlers arm! Nothing! When we were in the ring I tried to get Ein to paw target on a little musical piano, and that would have been a passing trick but Ein just kept laying down on the piano and that was Not Good Enough. I finally had the good sense to get Ein paw targeting and rewarding him like crazy for it, and then we went back into the ring and I asked him to paw target on the $%$&!!! toy piano and he did it and we finally passed the Intermediate Trick Dog. Whew! It did me a heckin concern!
Comparatively, Advanced was a breeze. Ein did Back Up, Circle Right and Left, Turn on pressure activated light (with the paw target again!), Play Dead (Bang!) and Down at a Distance of 15 feet (verbal or hand signal only.)

And all that remained was the blissful relaxation and no-thinking joy of Molly's dock diving! It has been almost two years since Molly has gotten to dock dive at an actual competition event, and she was cranked to the max! She was so frustrated having to wait she latched onto my leg and tried to hump me a few times. Oh my! Molly had her first two jumps with NADD, in the senior range with a 15'6 and a 15'.

So I got my Freehold showgrounds fix for the year and a well rounded day for all! Only Perri was left out of the action. I am curious about getting her up on the dock to see if she is brave enough for a leap but the day was far too busy for that. I am planning on some more NADD events later in the season and they do allow "Try Its" with a second dog on the dock, so that is going to be a very good way for Perri to get acquainted with jumping. And as far as the Trick Dog titles, I can grandfather Perri's DMWYD Intermediate title so she can go straight to testing at the Advanced level. I will look forward to a future event with her! Not that Perri minded coming along for the ride and being support staff, she is always happy in that role.
Posted by dogbird daily at 5:10 PM