Sunday Zorro had his debut in CPE and also did his first "for real" runs. This trial was sort of a last minute decision for me and a weeeee bit of a lapse of self control. (the plan was to do training runs only for a while!) The truth is that training runs in USDAA make me feel more secure, whereas in CPE I am a little more relaxed. And Zorro? He is just Mr Chill.

I was not sure how he would react to dirt footing, and I knew he would be seeing new-to-him equipment. He primarily sees and trains on Doggy Jumps jumps, with thick chunky bars. This trial had more traditional style jumps. A double jump he had never seen and a dog walk he has never seen. He has been trained on the double jump, but this piece of equipment can really vary in appearance by trial site.

Anyway! He was just....great. It kind of blew my mind. No zoomies in the dirt, no sniffing in the dirt, no getting "high" because of the dirt. Errors made were baby dog errors or handler confidence errors. I was so super happy with this guy! We played in Jumpers, Colors and Fullhouse - he qualified in all. Zorro earned his first agility title, CPE Level 1 Fun! (one Q each in Level 1 Jumpers and Fullhouse.) 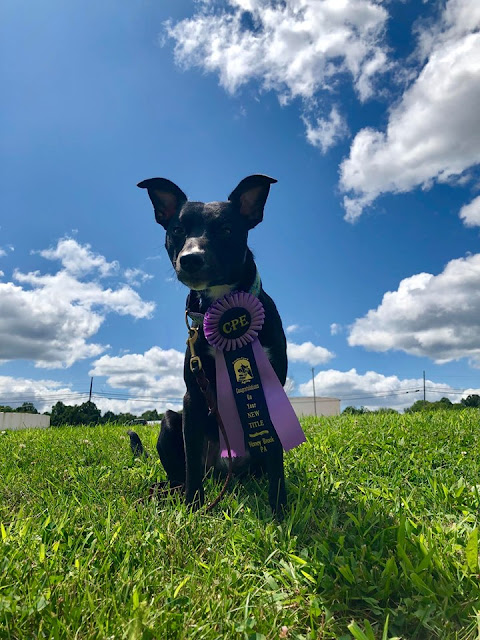 Jumpers was first. A tough 90 degree turn after a speed line, we had a refusal (CPE does not score those). Everything else was great except me letting go of a rear cross just before he committed and another refusal. Disappointed in myself because I chickened out of a front cross and I had plenty of time to do one - I need to be braver! I was thrilled with Z pulling to the correct end of a tunnel discrimination.


Colors was next, he ran it in 11 seconds and would have been faster if not for me getting hopelessly behind in the middle of the course! This boy has wings. In Colors you have your choice of two mini-courses. Zorro's Aframe training is not complete so I chose the course that did not contain the Aframe.


Fullhouse was last, always Molly's favorite! I was thinking of her when I ran. I didn't love the layout of this Fullhouse but we made it happen with 24 points. Zorro only needed 19 for his level. In Fullhouse you need three bar jumps, two 3-point obstacles (tunnel or panel jump), and a "joker". This course's Joker options were: Aframe, weaves, dog walk. We went with the dog walk because Zorro's weaves and Aframe are not ready for prime time. He was a little slower than normal on a different dog walk but he did well! I think, having my girls who never generalized very well, I am extremely appreciative to have a dog who is able to do so.

Posted by dogbird daily at 6:09 PM