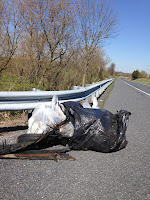 Perri and I have been celebrating.   Last Saturday we participated in a "Cache In, Trash Out" (CITO) event at Blue Marsh Lake.   Geocachers organize these events so that we can get together, clean up litter, and geocache together!   The event was being held by the actual park, and there were many other groups (besides geocachers) in attendance.   Boy and Girl scouts and other groups looking to enjoy a day at the park and make it look prettier.

We broke off from the main group to drive a few miles north and do road side clean up.   Perri waited in the car since it was too dangerous for her to be alongside the highway.  I met four other geocachers (they own boston terriers, I found out in no time.) - and together we gathered about 6 bags of trash as well as many tire scraps.   It makes me so sad to see the things people thoughtlessly throw out of their vehicles, I will never understand it.

We worked for about an hour and a half cleaning the trash up, then we went looking for some geocaches!  (We actually found two mid-clean up because there were two hidden nearby the guardrail sections along the main road.)   It was really fun geocaching with other people, especially a group!   The two caches we looked for were both missing, but it was more fun than frustrating logging a DNF ("Did Not Find") with other people.

After that we returned to the main park area for some free lunch provided by the park officials, as well as goodie bags full of candy and treats.  Perri and I soon left for a hike alongside the lake to find another geocache...and do a little lake fetch! 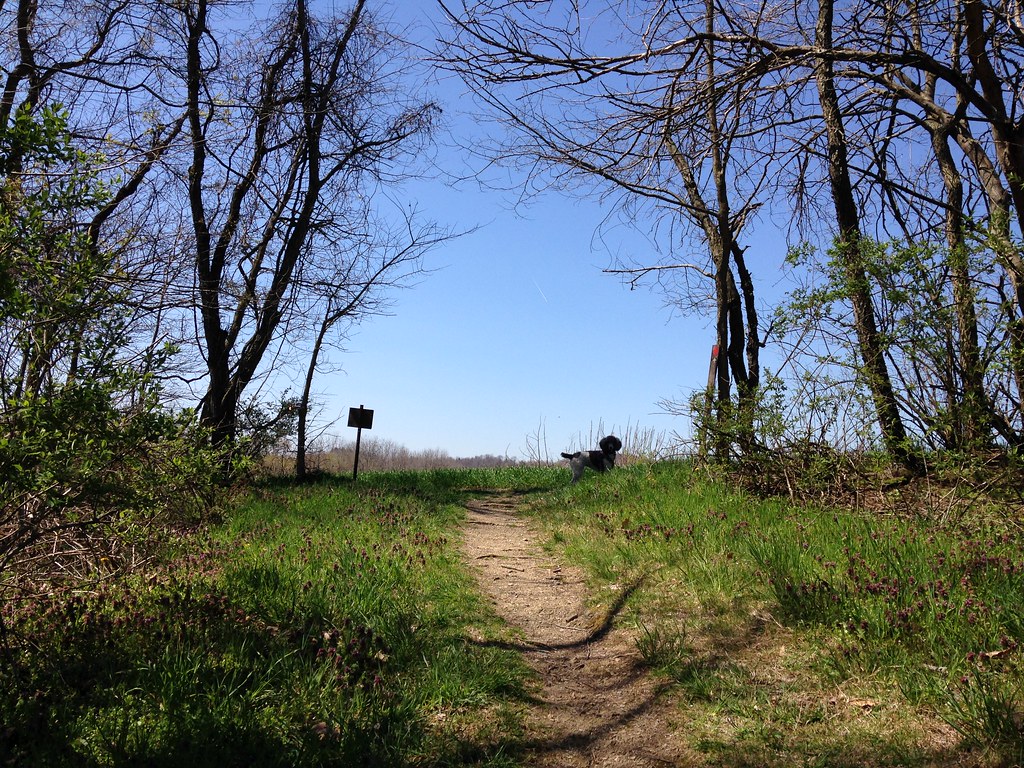 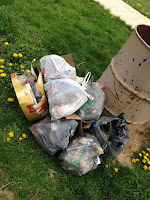 Today on actual Earth Day, I had the day off and it was more beautiful weather.  I took Ein to his cold laser appointment and stopped on the way home at a rails-to-trail that Perri and I had walked in the past (and found all the geocaches on but one, right in the parking area.)  I wanted to find the parking area geocache on my way through.   When I pulled in, I could not help but notice the trash everywhere.  The lot holds probably 10 cars and the entire treeline was loaded with all sorts of trash.  And I had some utility gloves in my car.  Well, it was Earth Day, after all.  I had no bags but I found empty grocery store bags both in the trash can that was in the parking lot as well as littered all over the place.  I can't help but feel completely disgusted with people who just throw trash out of their cars.  How hard is it to just walk 50 feet to a trash can so that nature stays beautiful for others?  But I guess if everybody thought like that, there would not be trash everywhere in the first place.

I found enough bags to clean up all of the trash and as a bonus...a park ranger from Blue Marsh pulled into the parking lot!  We discovered that we are both geocachers and spent some time chatting and he ended up helping me find the geocache that I had come to find.   Fun! 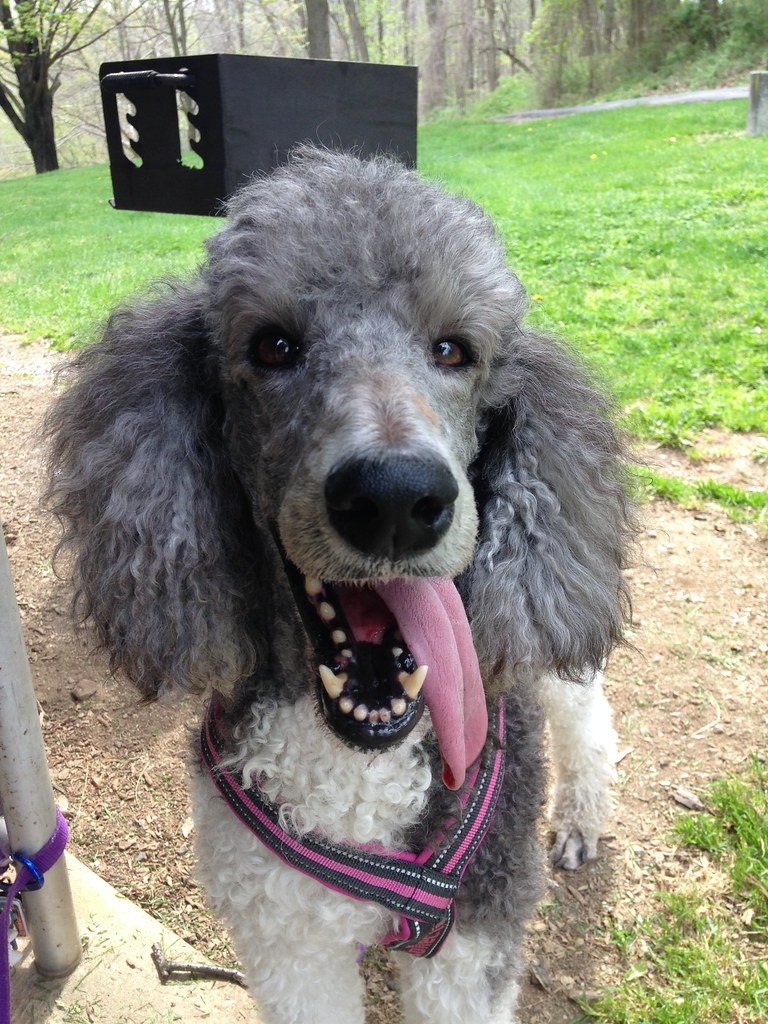 I took Ein home and Perri and I went out to three different parks finding geocaches and enjoying small hikes.  I had given her a bath on Sunday night and was trying so hard to keep her clean for Poodle Club of America (this Monday!), but she went chipmunk hunting and swimming in the creek and that was that.   She needed a second bath anyway so I can blow dry her coat but still...  Oops! 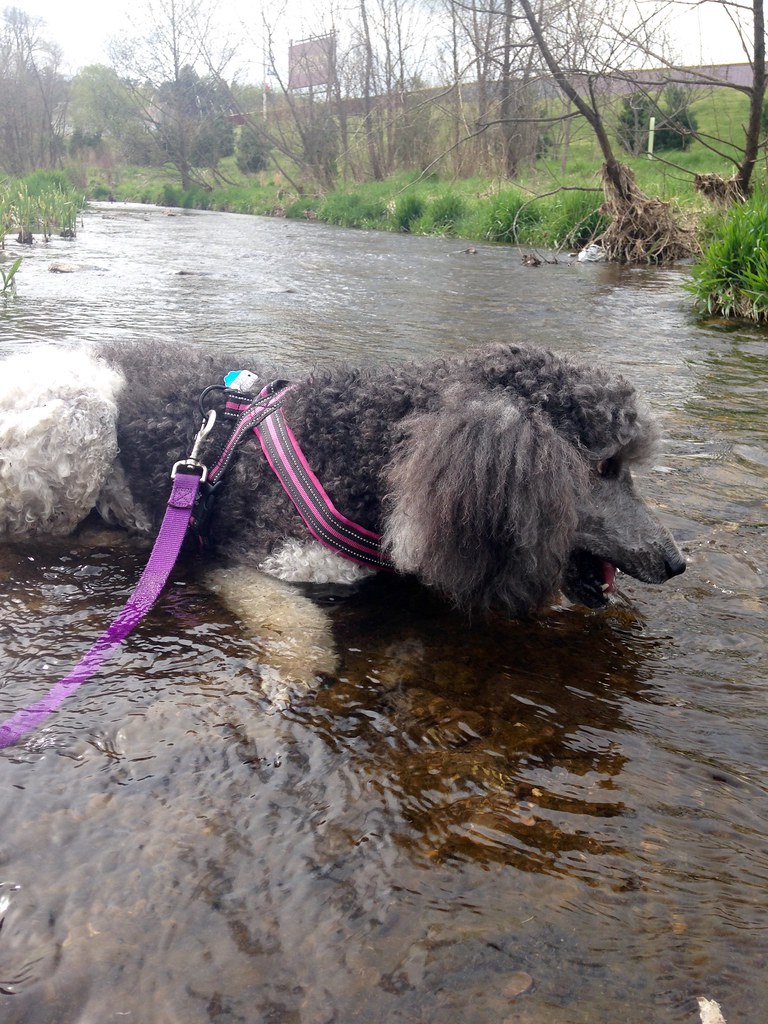 Posted by dogbird daily at 6:09 PM