Busy weekend but  I have to rewind to Thursday!   I took the girls to Kruisin Kanine's Open Agility practice for the first time this year and I felt like it was a really productive time!

With Perri, I did not do much.  Less is more!   In our own yard at home I have had our 12 weaves set up, slightly open channel except for the two poles at each end.   Both so that she enters two straight poles and that on the exit she has to collect and pay attention to those last two poles.   At the agility practice, it was our first time away from home since the confidence-building channel weave games at home.   Took Perri to the outdoor ring...she rocked the weave poles.   No popping out and some nice footwork!   We did a little bit of work in the indoor dirt ring but Perri became deflated after I put her in one of the wire crates lining the ring.  She still did her weave poles and stayed in them.  This is a huge improvement from any time that we were at this location last year.  And next time we visit, I will use Perri's soft crate!

Molly was a lot more work!   Since we are returning to a stopped A-frame, I wanted to practice that at a new location.  There were two A-frames in two different rings and that is awesome!  Molly did really well and we had unlimited time to work on this skill, as well as taking breaks and mixing in other work as well.  Molly and I have been working on her stopped A-frame over the last month.  Our trainer has had us backchaining the behavior, so I had to train a strong back-up and rear foot target behavior on Molly.  We have been generalizing this on different objects, as well as the A-frame.  We recently started putting it all together, with Molly needing to find the end behavior (the "two on/two off" position that she has been backing into) as she is running up and over the A-frame. 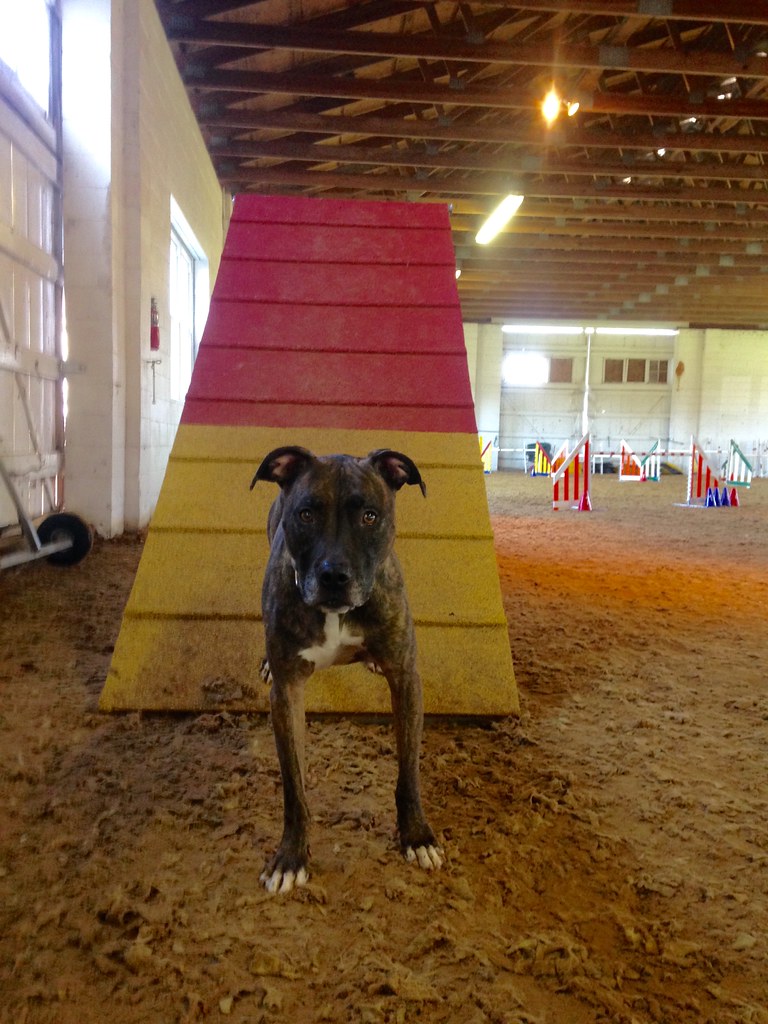 Molly is really soaking up this training and I feel like she is becoming very solid!  You can see that Molly's rear feet are on the very low end of the A-frame.  Our trainer feels that many dogs blow contacts because the traditional 2o/2o position puts a lot of pressure on their front end, since their rear is so high in the air.  I agree!

Making Molly hold her position for photos is perhaps a little "mean" of me, but it is good for her.  She must stay until released, and "torturing" her with useless photos (in her opinion!  she has always hated photos.) is just additional proofing.  Plus, she's cute!

Another thing that we worked on is: using the ball to generalize weave pole value.  Last year I did not use The Ball! here because I wanted to run a course and reward Molly for doing the weaves with another toy (lower value, less lunatic behavior.)  As the year progressed, we took the weave pole foundations class on FDSA and our instructor there encouraged me to use the ball and get that high arousal!  I get bitten more, but it will be good in the end.  And sure enough, I got some rockin' weave pole work out of Molly.  At one point she was headed at a 90 degree angle towards the weave poles, and headed dead for the second pole.  I was at least 10 feet behind her.  She veered away, found her entry...and completed all of the poles.  It's in there!  She knows this!  I just need her to see those poles wherever we go (trials!) and feel the excitement she feels when she knows the ball is coming.  We are going to get there!

The last thing that we worked on was engagement in the outdoor ring.  And it was not easy.  Last September was the last time we trialed outdoors and it was a complete disaster.  Complete stress, jumping out of the ring, screaming meltdowns (which I felt were the result of her being confused and thinking she was lure coursing).  As soon as we walked outside we did our normal acclimation work.  I asked her for a sit stay.  I unclipped the leash.  Molly was off like a shot sniffing the edges of the ring and found some deer poop to roll in.  Yikes.   We backed it up and I really gave Molly extra acclimation time, I let her sniff and if she engaged with me that was her choice.  We worked on focus as I went to remove the leash...that took a while.  She knew when I took that leash off she was free to do as she chose! (deer poop.)  We had a lot of trial and error out in the field that day, and we have much work ahead of us.  We were at the training center for two hours, we cycled through these three exercises - as well as breaks for me to work Perri or just talk to the other people who were there.  By the end of our time, in the outdoor ring, Molly was able to do two jumps and a tunnel and recall to me (for a major jackpot!) and we ended it there!

I love this club and their three-ring open agility practice!  I look forwards to returning there.
Posted by dogbird daily at 7:47 PM