On Friday the 13th Molly and I ended our 6-month break from AKC Agility.   I felt that my handling of the weaves as well as her confidence had grown, and that we were ready.  Over last year I shook away a lot of the mental distress I brought with me to trials: the negative thinking, the hatred of Standard and the defeatist attitude.   In the last half of the year I really feel that I made huge strides in keeping away from stressing out Molly while she is weaving, to the point where she has begun to do some of her best weaving ever at trials, consistently.

Molly has a history of stressing up from the AKC environment - and I get stressed out and anticipate that behavior.   I have a history of getting Too Serious, because it is my favorite venue and the one that I feel most challenged by.   It is the venue that laid bare any and every issue that we have, the venue that refuses to let us get away with anything.  It stresses me out, and yet I love it.   Entering this weekend's trial, as well as other AKC trials I have entered this year, was a big decision for me.   I am more laid back in CPE and USDAA, and Molly responds well to that.   But that laid back attitude did not come naturally - I challenged myself again and again and worked towards that.   And now I'm ready for the next step in our journey: stop spazzing out at AKC trials!

This weekend I was fighting against myself.  Just as I was fighting against myself a year ago at that CPE trial - fighting so hard to stop from speaking negative things about Molly and I out loud.   Fighting so hard to believe in us.   This is not going to come quickly for me, but I will do it.   I did not enter Perri in this trial because I needed to just focus on one dog.   And that dog was Molly.   My wild girl who can bring out the worst in me, but who stands by my side while I weather the storm and we both walk out of it as a better team.   That's us, that's me and Molly.

On Friday we started with Standard.    One two jumps and into the wrong end of a tunnel.   Bat out of hell blasting over a serpentine, missing a jump and nearly knocking me on the ground.   Over the Aframe and up onto the pause table for another wrong course.   Two more jumps and a wrong course tunnel.   Drop dead gorgeous weaves.    Jump run out at the end on the second to last jump.   And on our way back to the crate she tried her best to mug the "Bone Stand" (another of our AKC-specific nemesis.   A huge multi-table vendor full of every type of bone, chewie and animal body part imaginable.)
Jumpers with Weaves was far better with another set of beautiful weaves (with a very independant entry that was hard for me to '"let go and let Molly do her job).   A wrong course jump got us, but I was really thrilled!

We went for a four mile walk, found some geocaches and spent the evening and the next at my parents' house since they live near the trial site.   When my mom and I went out on Saturday and left Molly alone in the house with just my dad, she took full advantage.   She ate all of their two cat's food. (a huge full bowl).   She ate all of their dachshund's dinner, a square of Little Cesar's dinner.   I did not know about either of these things, yet.   My mom and I suspected the wet dog food was eaten by Molly, but we were not sure.

Sunday morning around 2am, Molly grew very restless in bed with me.   She is historically very annoying to sleep with, some nights worse than others.   She shifts around a lot, she bed hogs, she stands straight up and "flaps" her ears and then stamps all over the place until you meet her demands for comfort.    She was doing a lot of that, and softly whimpering.   When she failed to settle I thought that one of the cats was underneath the bed and Molly was beside herself.   I kept ordering her to lay down and I will admit I was getting very frustrated.   But she kept it up.   I considered going down to the couch with her to see if she could settle better, without the cat.   It never once occurred to me that Molly might have to go potty.   At that point, to my knowledge, Molly had not had anything rich to eat in excess - and Molly hates getting out of bed in the middle of the night.   More than I do!   And she had been pottied before we went up to bed.   But finally, she started shaking and panting and I seriously thought, "Is there a storm?"  Even then, my dense half asleep brain could not imagine she had to go potty.   I finally asked her, though I thought it was not at all what she wanted, if she had to go outside.   She was off the bed like a shot and hurtled down the stairs and stood panting at the door.    You have to leash your dog outside where my parents live, so there I was in my pajamas with no coat, having to pee very badly watching my poor dog who had been begging to go outside for an hour finally relieved herself of a huge amount of explosive diarrhea.    She slept very soundly until it was time to get up for the trial.  Poor Molly!   I felt so guilty for not getting her out sooner.

Molly was in good spirits in the morning.   She squeezed out a bit more diarrhea, ate her breakfast with a great appetite and had plenty of energy.   No doubt we would still go play agility with that good attitude.   She had a little bit more diarrhea at the trial site, but mostly a lot of loud farting and not much poop coming out.   Molly ran really well but popped out of the weaves on both Standard and JWW.

Devastated doesn't even begin to cover how I feel about that.   Give us NQs, wrong course tunnels any day but weave sadness is paralyzing to me.   Of course after a few hours of licking my wounds I realize Molly's belly must not have been feeling well still, and when it came to her most stressful obstacle - that was gonna show.   I also specifically remember catching myself clapping in Standard and I have no doubt I did that in JWW.   That's a big no-no.   And I know why I did it.   We were still qualifying up until that point, and I had the dreaded Q-brain.   The clapping is pressure and it is a sound that Molly has very negative associations with when she is weaving.   I made a mistake, and I pressured her when she was struggling.   And I will make every effort not to do that again.   It feels good to have a reason after thinking it through: the diarrhea and the clapping in combination.   I hope that is all it was, not a back slide of progress.

So, did we come roaring back to AKC successfully?   Not really.   But will we grow as a team there?   Yes, we will.   I already have more direction than I did when the weekend began. 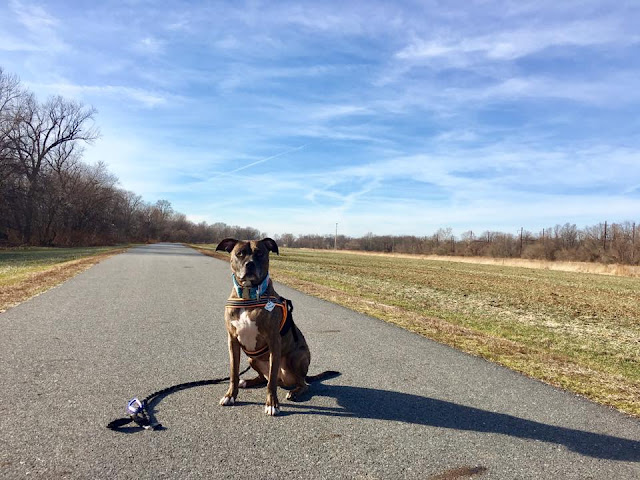 Posted by dogbird daily at 3:10 PM

Email ThisBlogThis!Share to TwitterShare to FacebookShare to Pinterest
Labels: agility, akc agility, it's all about the journey, molly, trials