After playing CDSP Obedience last weekend, it was nice to return to the rally-o ring and its familiarity!  This was a two-ring trial so it went rather quickly.   Ein and I started in Level 2 and had a perfect run except for my needing to double-cue the "down" on the Halt-Sit-Down exercise.   I must not have learned from our last trial, because I cued with a verbal only when Ein has made it clear that he needs both verbal and hand signal.   Oops!   207/210.

Next was a 209 in Level 1 - it was a super flowy course with lots of heeling and not a lot of halts, nice for senior dogs!

We ended the day with a fun Level 3 course.   I was hoping the Drop on Recall would be used at today's trial but no such luck.   We had the Directed Jumping, the Recall over Jump, the Moving Back up.   Our bonus was Stand with Distraction and Ein was solid as a rock.   That made me proud since we have not done any "stand" work since we finished his CD.  We worked so hard on that one, truly changing his mind and building his trust that I doubt he will ever forget or "get rusty"!   We got a 207 and I'm not really sure where we lost the points.

So that means Ein is officially halfway towards his ARCH MX.   Yay!

I also took advantage of the available day of show entries and entered Perri in Level 2A again.   I repeated Perri's usual ringside routine that we do for agility, trying to get her Up! and happy.   Sit Pretties, High-Fives, buzzing and making turkey sounds and asking her where "daddy" and "mommy" are.   She even jumped up on me wagging her tail right before we were called into the ring....perfect timing.

And she was absolutely ON.   Flashy happy heeling in perfect position with a smiley mouth, no doubt with the tail up!   Even two left-turning signs in a row (360-Left and 270-Left) could not bring her down!    Her drops were perfect and fast, no reluctance.   She got ever so slightly worried when the heater in the building kicked on, but it was only in her face - only I noticed because I know her so well.   I had to re-cue her on a Pivot 90 Degrees, and I blame that on myself.   I fell into one of my old habits of just pivoting and murmuring my cue all at one time rather than giving my dog a half a second to realize what I wanted.   Ein probably compensates for this more than I realize because he is so seasoned and used to my nonsense, but Perri needed clear handling.   Can't blame her for that!   Our second re-cue was on the bonus.   It was the Call Front with Distraction.   You leave your dog in a stay, and call them to front.   As soon as you cue your dog, the judge walks towards your dog in a parallel path.   Perri remained sitting when I cued the front because she was staring at the judge.  Oops!   I called her again and she responded.

Aside from those 6 points off for re-cueing, Perri lost no other points.   I'm really proud of her, of us.  Perri finished her RL1 title in summer of 2014.  And I just did not feel that she was ready for Level 2 until recently.   We have gone through so much trouble with worrying and staring in the ring, with her total loss of motivation.   As a fairly new handler, it was destroying my confidence and continuing to try to train and show Perri in rally or obedience was not helping either one of us.   The best decision was to take a break.   My friend sometimes shares "cowboy wisdom" with me, and one of those wise observations is that "horses can't read a calendar."   Neither can poodles.   If it took Perri years to feel comfortable enough in the ring with me, with herself, with the environment....well, that is how long it took.   Period.

Perri's confidence has grown by leaps and bounds, and so has mine.   We have a good ringside routine that is working well for us.   I train while Perri and I are playing, we don't really have formal training sessions anymore since she seems to find that to be too intense.   We are getting somewhere.   Today Perri performed like I always dreamed she would, like I always knew she could.   I feel like we are finding our way, and I can't believe it is finally happening. 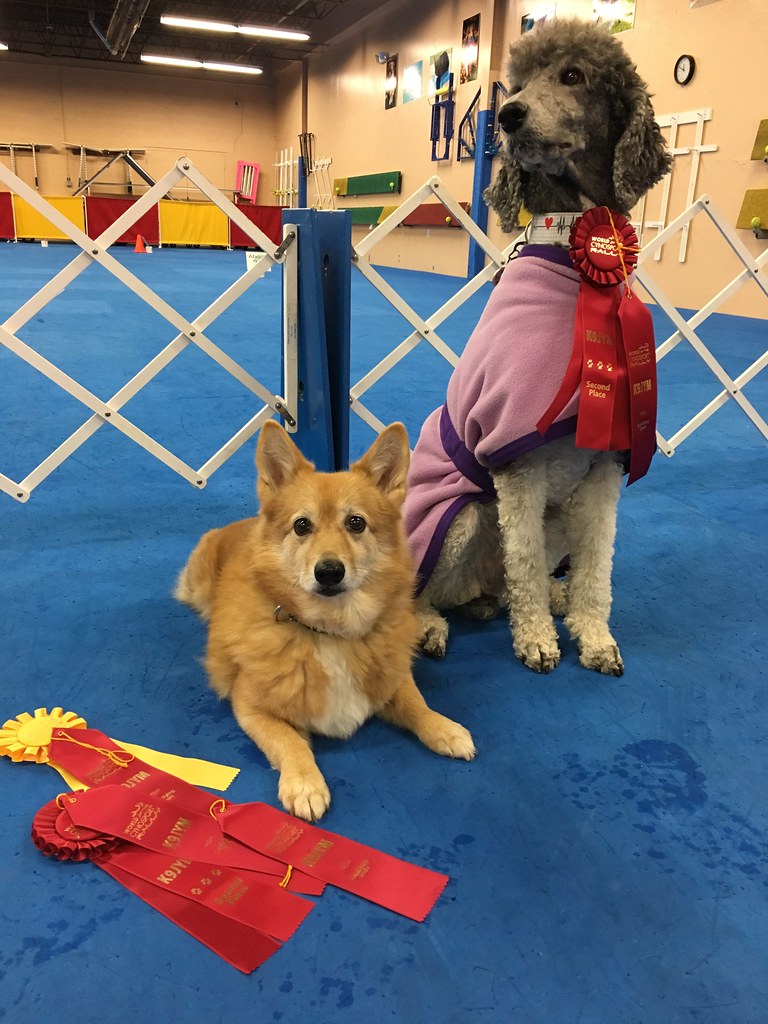 Posted by dogbird daily at 1:07 PM