I forget why I even entered today's Barn Hunt trial.   I think I went to a practice, Molly did well and I felt excited enough to want to go to a trial.   When Molly received her lymphoma diagnosis, I did not scratch.   I thought, "Well, it's not physically difficult and maybe it will make her happy if she is on chemo."   Long story short, we are not on chemo...more on that in a few days.   Molly is feeling tip-top so I am glad I did not scratch.

Today was her first trial since the lymphoma diagnosis.   It felt great to load her up in the car, put her fleece coat on her and drive out to a trial.   Even if it was not an agility trial.   Last weekend we went to a Barn Hunt practice at a new place.   As soon as we pulled in, I heard gun shots in the distance.   Just like our last trial!   Molly fell apart and gave me no indication on any tube.   She had no interest in even sniffing tubes.   We had two runs at the practice and by the second run she was pawing the tubes with much  encouragement by me.   I was not feeling confident for today's trial.

Our first run it was plain, she thought I had treats.   In the blind I had the bright idea to hold a treat in my hand and only give it to her if she clawed at my hand.   But I was pulling all treats from my coat pocket.   In the ring she was showing off.   Bounding around with poor focus, blasting through the tunnel multiple times, flirting with anybody who was nearby and doing anything it took to get me to give her some of my "treats" - treats I did not have!   When I asked her to search under the wooden ramp for a rat tube, she levitated onto it and did a two on, two off!   Laughter erupted from the crowd!   I was bursting with love - how cute!  There were two rat tubes she lingered on more than the others, so I called "rat" on both of them and we earned our first Open leg.   I feel like I had to do way more than half the work!  Molly earned 4th place in the Large Open dogs with a time of 2.22 seconds (she had 2.50 seconds to search.).   It felt like we were at 2.499999 when I called the last rat!

We had a very, very long break after that.   I scribed Novice for my first time, and got a migraine right in the middle of the class.   That lasted for a few hours all while I tackled my first time as an outside rat wrangler in Masters.   I was nauseous and very hot the whole time, but I still learned a lot.   Masters class is extremely intimidating to me - an unknown amount of rats?!   For each dog, rather than for each blind, the judge would decide how many rat tubes and bedding tubes would be out.   My job was to fetch the desired amount after receiving a hand signal for the numerical count (so that no one outside in the blind could hear how many rats would be in the ring) - and each time there would need to be four, exactly four, tubes left over outside of the ring.   It did not matter if this was rat tubes or bedding tubes - the count had to be four.   I had a very loose grip on this rule until one time a dog ran with too many tubes in the ring and was granted a re-run.   I was told sternly to alert them if there was less or more than four tubes waiting to go in!

Finally it was time for Open again.   This time I put Molly's blind treats in a treat bag and only took them out of the bag.   No pocket treats.   We played more of the "paw my hand" game.   I clearly laid the treat bag outside of the ring for her to see.    Treats are Done and when we come out of the ring, your bag will be here.   Delayed reward, we have visited this concept before.  We did not have any issues with hyperfocusing on me in the ring.   As soon as I released her from the start box, Molly did a to-die-for blast through the tunnel followed by a "climb" onto the straw bales.   Many Barn Hunt dogs do well finding their rats but fail on the tunnel.   Molly loves the tunnel - this is not an issue!  I was actually really proud of my handling for this run.   Molly wasn't terribly focused on hunting - her focus was on cowboying around and flirting with plenty of snorting and sniffing in between.   She lingered sniffing on a tube for a second or two, then left it.   I humored her and asked her to check some other places, but then brought her back to that tube.   I really interviewed her about it and she gave it some scratches so I called Rat.   Those beautiful words, "Rat 1!"   And I remembered: in Open if a rat is on the ground, the other one has to be "up".   I let Molly continue cowboying around and looked at some "up" places.   I found one we had not searched yet and asked her about it.   She looked at it, snorted around and then dug at the tube - "Rat 2!"   We finished in 2 minutes even and 1st place in Large Dogs. 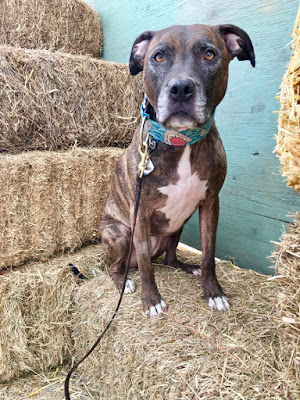 Our first two Open legs!   What a difference no gunshots makes!   Getting a strong indication on Molly has been the issue since the beginning.   And it is still a struggle!  At practices, once her indication is rewarded it becomes very strong.   But at trials she doesn't communicate so well.   However, I feel like I turned a corner in learning how to read Molly when she is working a rat tube.  Very empowering!  She will give a bedding tube one sniff, just because I ask, but a rat tube she will linger on and sometimes scratch at.   That's my information.

When your dog has cancer, you take a step back.   The training, the precision, the perfection just does not matter as much.   You have perspective, you are just grateful to be there.   Grateful your dog feels well and happy enough to be herself.   The Qs are secondary.   And you can bet that was on my mind today.   To have a day of Molly flirting and rioting around the ring just like herself was tears-in-my-eyes priceless.   It felt good to Be Back.
Posted by dogbird daily at 6:36 PM