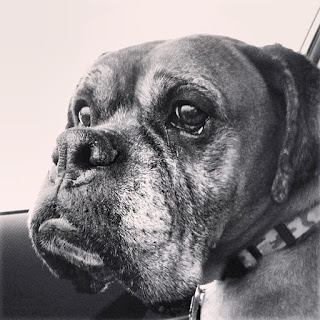 First rescue transport of the year!  I have definitely missed transporting.  Unfortunately, today's weather could have been better.  When I started driving to the pick up location, there were flurries.  Then it started laying on the road.  My little car does NOT like driving in snow, and neither do I.

Thankfully the major highway that was the entirety of our route was only wet with random slush spots.  There was a jam-up with bumper to bumper traffic for about a mile about half way through our drive.  Nothing heart stopping, though.  I think that I used up my entire reservoir of windshield washer fluid.  It was a yucky evening to be out!


The Boys...
The two dogs were found roaming at large together in rural Ohio.  They are being taken in by Adopt a Boxer Rescue in New York.

Eric - is an older boy, about 8 years old.  He rode "shotgun" with me and slept pretty much the whole time.  He has a considerable mass on his hind leg.  It did not seem to be uncomfortable to him.  It will be evaluated when he gets to rescue.

Eli - is about 4 years old and was a busy body!  I chose to have him ride in the crate because I was told that all he wants to do is give kisses.  With snowy roads, the last thing that I needed was boxer tongue all over my face, as adorable and sweet as that may be!

Posted by dogbird daily at 5:25 PM