Ein and I went all out today at our Rally-O trial.  We entered everything but Puppy!

Since Ein finished his Level 2 title at our last trial, he is now able to work towards his ARCH (APDT Rally Champion).  To earn that title, he will have to get qualifying scores in both Level 1 and Level 2 (this is called a "QQ") at five different trials.  Five QQ's.  He will also need to gain 100 ARCH points - 30 in both Levels 1 and 2 and 40 from either Level.

With THAT in mind, we set out for our first QQ today.  We set out for our third leg in Veterans (earning Ein his RLV title.) and we gave Level 3 a try.  It was a nice try, but no qualifying score. 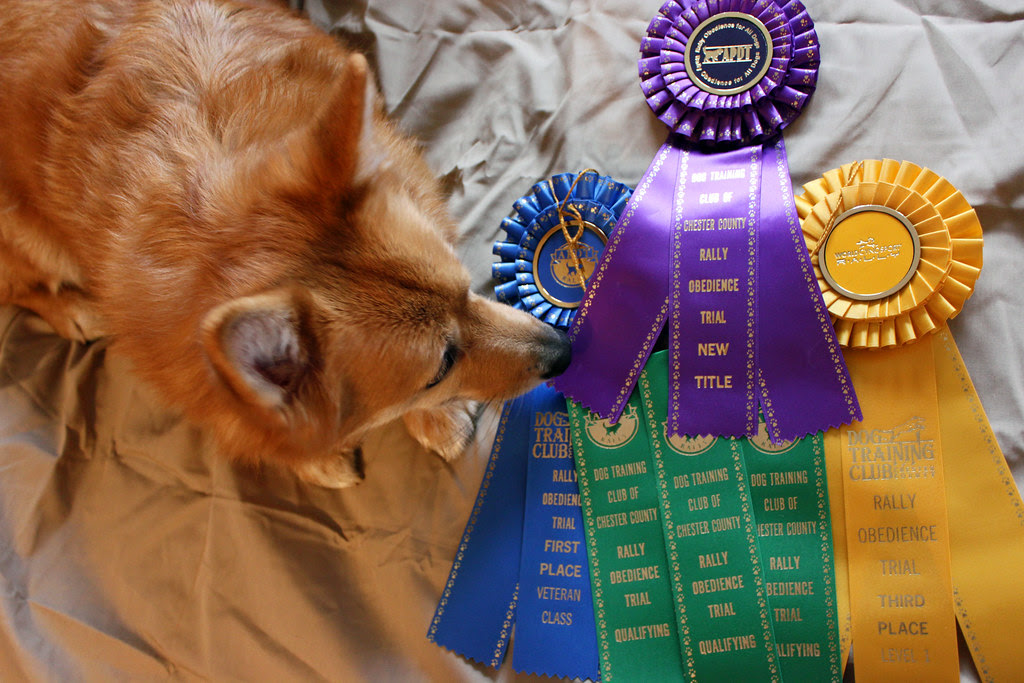 We started off with Level One.  Ein was in the ZONE.  This was a nice course, and he was happy to work, all smiles and silliness.  He did an excellent stand on his "Please" cue, which makes me feel comfortable that our Stand Troubles are in the past.
I entered the Serpentine on the wrong side, which was a shame.  I don't think I have ever made that particular mistake before.  Whoops!


The smooth sailing couldn't last forever.  This course was also nice, but has some of the things that Ein doesn't do so well. (Halt-Side Step Right-Halt) and Left Pivot work.
That wasn't the issue.  Once we hit the moving down, he sat.  I re-cued him, but then he seemed rattled.  We worked through it, but slowly and with quite a few double-cues and a creep towards me on the bonus "Leave Dog-Down Dog-Return to Dog".

I put Ein back in the car to relax, since we had some time before his Veterans course.  He likes the (stationary) car better than his crate.
I wasn't sure what dog I was going to have for the rest of the trial.  The happy, smiley dog?  Or the anxious, hesitant dog.
I had the happy, smiley dog for this veterans course.  Back was my prancing, grinning corgi friend with a 204 and first place in A class.

As I said, that earns Ein an RLV.  We can continue in Veterans, five more qualifying scores will earn Ein his Veterans Championship.  We will see.


I was sad to see that Number One jump sign.  Ein is shakey at best on being sent to the jump, much less under any sort of pressure.  As I said, it was a leap of faith to enter Level 3.  A gamble.
I left Ein in a sit, took my position away from him and sent him to the jump.  My dog stared at me, alert.  Waiting for a command that made sense to him.  I re-cued.  He kept staring, but I saw him wilt a little bit.  I took a step towards the jump and cued him again.  He ran towards me.  I told him to Stop, re-tried the sign. (He stopped dead in his tracks, before getting to the jump).  However, same thing.
That all took Ein's confidence away, and anxious hesitant dog was back.  I tried to work him through the course, just to finish it.  We had already NQ'd.  The judge suggested that I take him off since he was looking really stressed, and I did.  (She was very kind about it, and looking for his best interests.  I am used to working Ein through his stress, but there truly was no need, since he had already NQ'd.)


All in all, a very good day that I am very happy with.  We have a double trial at the end of April - and I have entered Levels 1-3 in both trials.

Only THEN did he seem to be bothered by the spectators and the judge around him.  It was like the Ein and Danielle protection bubble was shattered and then he was exposed to the world around him, and he did not like it.  I truly do stay upbeat with my guy, that is a MUST.  I don't know if he can sense something from me, however subtle, or he simply gets rattled by being re-cued.

The jump was definitely a Bit Much.  I could see him wanting so bad to do what I asked.  The judge said he looked like he had absolutely no concept of what I wanted him to do, and it was TRUE.  He did look like that.
However, we had just worked that particular exercise with 80 percent success at the park where Perri's obedience club is, and had been working it at home as well.
We will definitely continue doing so.  I think that a specific cue word for going out to the jump would be a good idea as well, versus me telling him to "jump".  That way, a specific word will mean a specific  thing to him.
Plans for the future!
Posted by dogbird daily at 4:01 PM