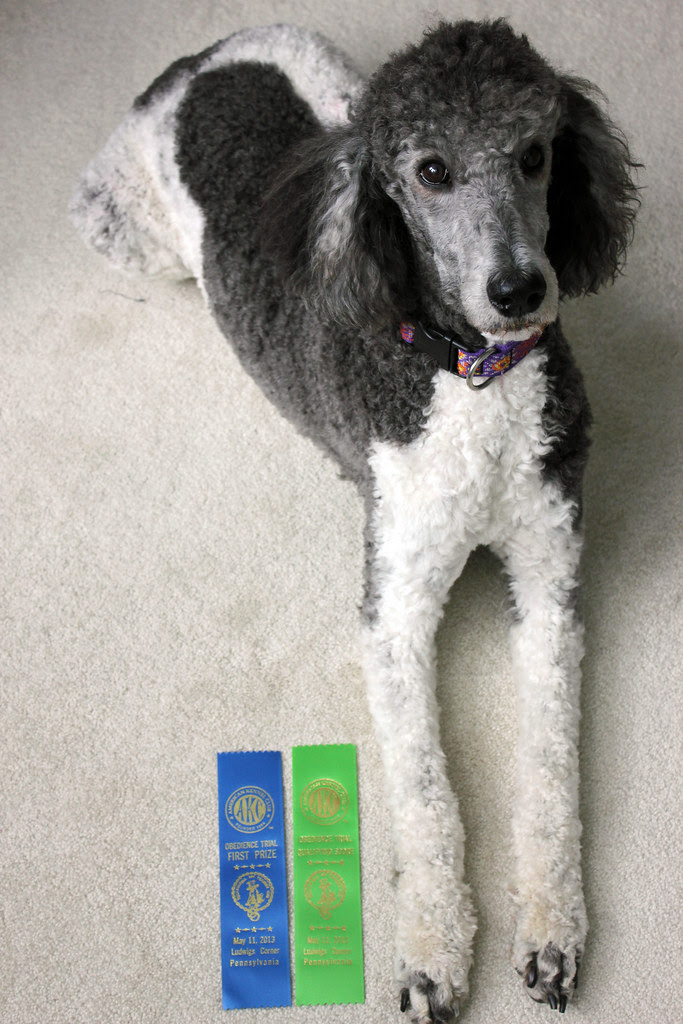 Her heeling was much improved from last time, which isn't saying much.  There was still sniffing and lagging.  But there were also many moments where she was heeling nicely.  She did not sit at the end of the heeling pattern.

The figure 8 was a bit laggy, but again with good moments.  She did both of her sits at halts.

The sit for exam was unremarkable.  She sat.  She was examined.

The Sit-Stay walk around was also unremarkable.  I walked fast and imagined a good poodle remaining in her sit-stay.  Good vibes!

The recall I also imagined a good poodle at sit-stay.  I turned and Perri STAYED.  I had my hand on my stomach as I turned around and the judge told me to get it at my side. (kindly!)  I called Perri and she bolted up and sat back down, she looked troubled.  I let out my allowed, "Good girl!" and she blasted towards me and sat at front, pretty and straight.  YAY!

Ein was in a really great, confident mood today!  There were still a few moments of hesitation, but no full-out zoning moments.

The second sign was a Halt-Pivot Left-Halt and Ein did that beautiful with a flip finish.  He came in straight and moved with me, no issue!  This is a big victory for him! 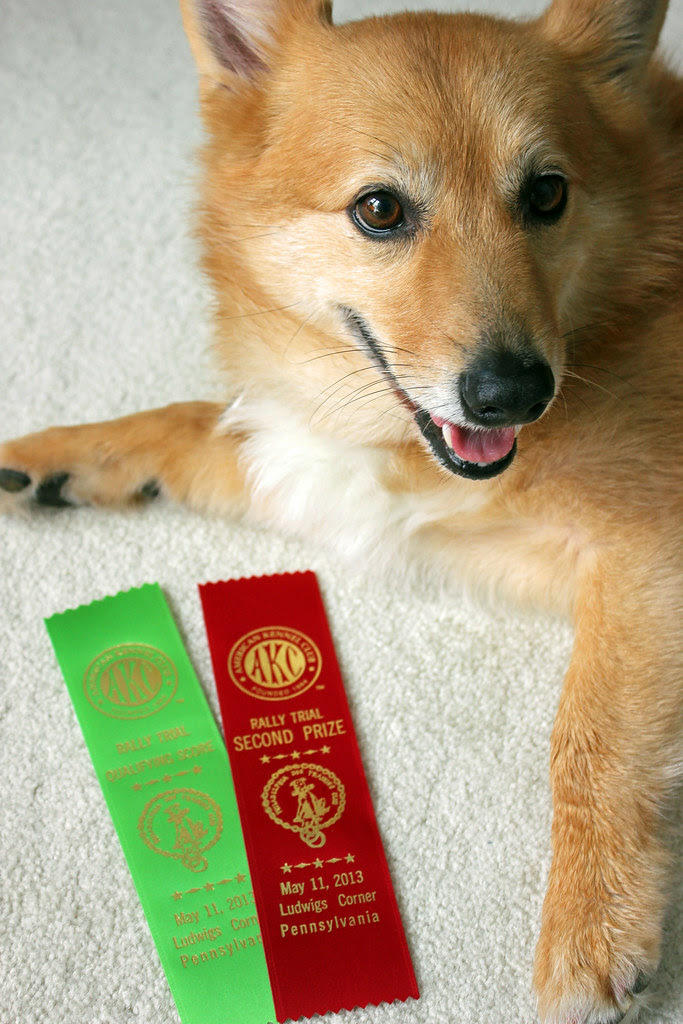 After Ein went over the jump he took off sprinting!  I was so shocked!  I called him back to heel just in time to do a Moving Down, which he did with no problem.  Another big victory, Ein is not a fan of moving downs.

Paradise lost, when I called him back to heel I failed to ask him to sit.  I erroneously assumed (NEVER ASSUME - ALWAYS DOUBLE CHECK WITH THE JUDGE OR THE RULES!  WHEN WILL I LEARN?) that this sign meant call to heel position and move forward.  (there is an Advanced sign like that.)  That cost us 10 points.  OUCH!

There was also the Halt-Stand-Sit and Ein did his Stand and I squeaked in a Sit quickly, because I could see that he was working on doing that anyway.  Oh that dog and his Stands.

We also had to do Sit-Stay while I fetched the leash.  I was sure to remind Ein to Stay as I walked towards and around him.  No penalties for multiple commands in AKC Rally - and I wasn't chancing a broken stay (that is what happened the last time we saw this sign.)

It is such a joy to work with Ein when he is feeling so happy.  It makes me want to work towards his RAE.  I don't know.  That is A Lot.  But days like this when I see how confident and happy my dog has become, it makes me wonder if continuing to work can help him blossom even more.  We do still have "work" to do in World Cynosport Rally-O, though.

P.S.  I was given a Phila Dog Training Club lunchbox filled with dog treats/a water bottle for entering! Perri won 10 dollars, Ein won 5.  These dogs are starting to earn their keep!