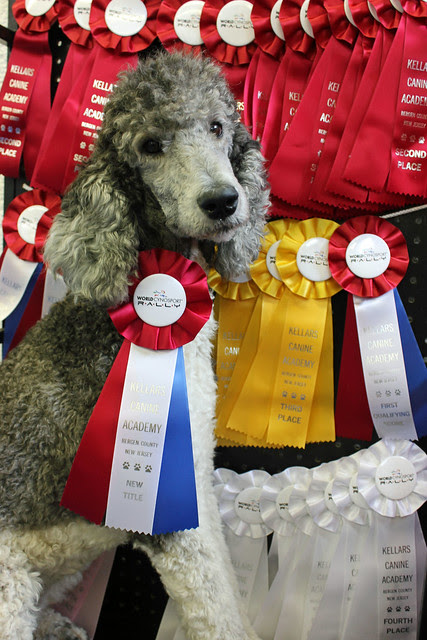 Another day, another Rally-O trial!  I signed Perri up for a Level 1 course so that she could finish her RL1, and finish she did!  Perri got a score of 205 and that secured her Level 1 Award of Excellence title as well (all three scores earned for the RL1 title must be above 190.)
Perri was a bit laggy and unfocused, glancing out at the crating area or at the judge.  I am trying to not become neurotic about these things, they will sort themselves out as we continue to work.  Aside from laggy heeling, Perri did her finishes and fronts nicely and was a joy to spin around a rally course with.
I may enter her in more Level 1 courses at other trials that I take Ein to - I would like her to gain more confidence in the ring and for her to learn to have fun in a trial situation.  I'm not sure yet.

And of course my main rally man, Mr. Ein, got a QQ under his belt for his ARCHX!  (Five QQ's in Levels 1 and 2 of 195 or higher.)
Ein was anxious at this venue and for some reason the judge made him extremely uncomfortable.  I cannot imagine why, she was very kind and patient and one of my favorite rally judges to date.  But she unnerved him incredibly, he spent half of our ringtime loking at her.
As I have promised myself, I tried so hard to not glance back at Ein: shoulders square and keep moving ahead.  That's hard to do!  What if my dog just doesn't follow me?  He did.  The constant stopping and cheerleading only pushes Ein back further.  He lagged a lot less since I just kept my brisk pace and spoke with my body language instead of my words.
Ein got a 205 and 206 in Level 1, he was a very good boy!
Level 2 approached and I wasn't looking much forwards to it.  Ein knows the exercises inside and out but things always seem to happen to punish our scores.  Either he has a meltdown and we rack up the "double cue" points off, or I make a dumb mistake.
Well the first Level 2 course was a 204 - that is the highest Level 2 score that Ein has gotten since his first Level 2 leg ever.  He did really well!  I had his jump height modified to 4" and he took it with no hesitation.
The second Level 2 course was hard work.  Ein's anxiety was getting pretty bad.  I had many double cues during this course, and just as we were nearly finished we hit the "Sit-Down-Sit" sign.  Ein downed but there he stayed.  He was plastered to the floor, panting and staring alternately at the judge and the crating area.  I asked him to sit back up four times before he finally did it.  The bonus was the "Halt-Leave Dog-Turn and Down Dog".  I thought for sure he would refuse to down and break his stay, but he went down and stayed down.  Hm.
The judge explained to me though that we had "pointed out" on that exercise - all of the points lost for the re-cues had NQ'd us. (too many points lost on one sign.)   Sad day.  If I had redone the sign, all would have been well - but I didn't think to do that.  So embarrassing!  Well, that's how you learn.
I get so frazzled when these things happen and I don't take the mental moment to think of all of my options.

I am consoling myself that our score may not have even been over 195 as it were - there was a lot of trouble on that course even before that sign.  But one QQ down towards the ARCHX is not bad!

Posted by dogbird daily at 6:08 PM