Eleven hours of CPE Agility today.  Oof!  That's a long one even for me.
I had Molly entered in: Level 3 Snooker, Wildcard and Standard and Level 4 Fullhouse and Jumpers.
Ein was entered in Level 1 Fullhouse, Standard, Snooker and Wildcard.

Measuring first!  Ein's measurement appears to have never been sent to CPE so he had to be measured again.  He stood better this time and behaved and measured in at 12.5" so his Permanent Card Height will be 12".  Good thing that we are in Specialist (allowing him to jump 8 inches below his P-card height.)

I asked the judge to measure Perri unofficially.  Perri acted like she was being slaughtered.  Hunched over and bowed away from the judge.  Goodness.  She measured at 22.5".  She will be a 20" CPE dog and a 24" AKC dog.

We kicked off the day with Fullhouse!  That always makes me happy.   Molly can zoom out, take obstacles and we Q and she is reasonably calm for the rest of the day. 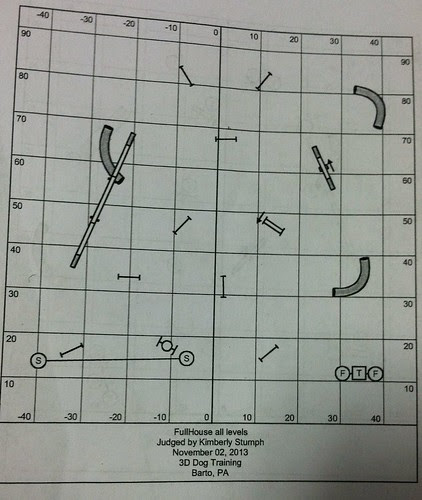 Ein's run was first.   He needed 17 points to Qualify as well as the required: three jumps, two "rounds" and one joker.  He got 26!  We started at the far left jump and Ein went charging the dog walk and ran off of it.   He didn't expect that!  He bounced right back and was very happy on the course doing all I asked of him.

Molly was next in Fullhouse.   I changed my plan for her after what happened with Ein.  Molly puts a whole lot more power behind her running than Ein does, and I was very much worried that she would fly up and off the dog walk and hurt herself.   Enter: Confusion.   You can see in the video that I am no good at changing my plan at the last second, but we qualified with 28/25 needed points!

Next was Level 3 Standard - that's Molly!  Molly was a good girl for this.  She ran clean with no faults.  My only complaint was her blowing past her weaves and me putting her back into them but hey, that's not really even that bad.  She did them after all!  She did great on a dogwalk/tunnel discrimination too and I was pleased with her for that.  This was our second Level 3 Standard Q (we need four more to move up to Level 4.) 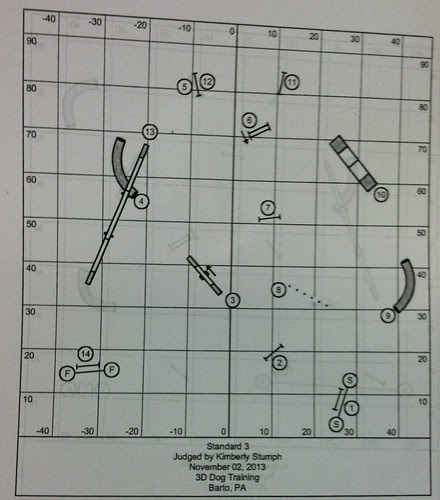 Next was Level 1 Standard, for Einey!  I wasn't sure how he would deal with the dog walk after the fly off and I got my answer: not well.  Ein had an awesome run but refused the dog walk.  I got him to get on it twice but he just hopped on and back off and according to the 4-Paw Safety rule, we had to move on.   I hope that I can get his opinion of the dog walk back to a positive one sometime soon! 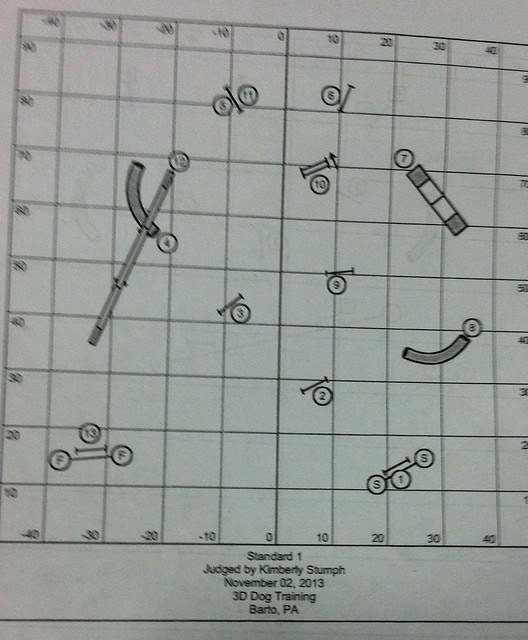 Next up was Snooker Level 1, that's Ein again!  Ever since the Snooker Workshop that I took at our club I am really enjoying Snooker.   I was excited to give it a try with Ein.   He was moving so fast that I decided to try to go for all 7-point obstacles in the opening.   But when I got Ein out of his crate it was like a different dog came out.  He was anxious.  He wasn't wagging his tail and acting happy, he just walked around in a somber mood.   I managed to get his mood up for Snooker but you can see in the video, his speed and confidence are not all there.  Still, we Qualified with 44 points when we only needed 24!  GO EIN! 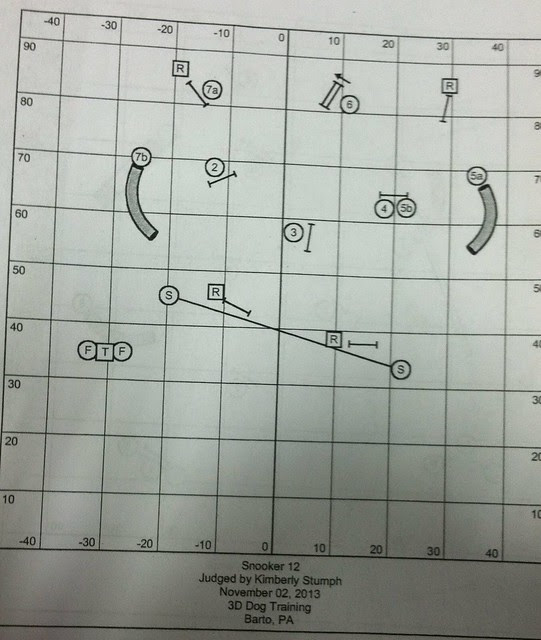 Snooker Level 3 was next with Molly.   Big plans.   I wanted to do the bottom left Red to 4-Jump.  Threadle to the Red Jump and then the 5-tunnel.  Upper right Red to 5-tunnel.  Closing.   Easy peasy.  Great!  Except somebody decided to run into the tunnel instead of threadle with me.  WHISTLE.  I watched the video and I decelerated appropriately, called Molly's name.   She just went into the tunnel anyway, oh well! I tried. 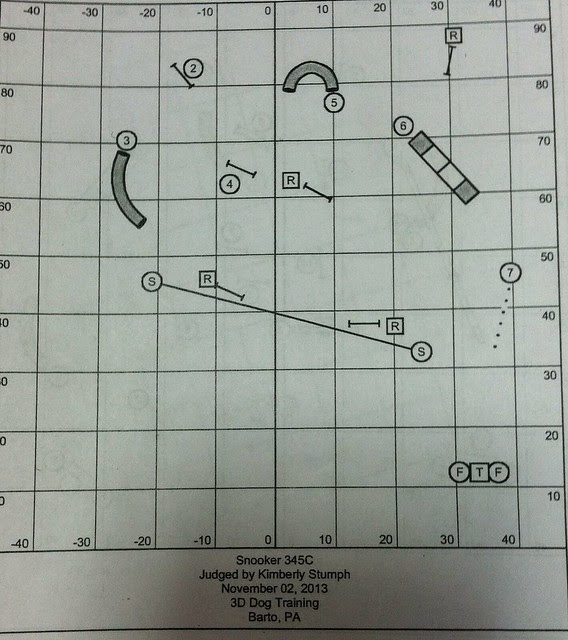 Jumpers Level 4 next.  This was my favorite run of the day, Molly was really working with me great and I am glad that we have this on video.   She did slip a few times on the SprintTurf and that worried me.  Other handlers saw other dogs doing it though but still, it's concerning.  I don't want Molly to hurt herself. Wildcard Level 1, last run of the day for poor run-into-the-ground Ein!  He did good but I could tell he was tired.  He blew off a tunnel entrance and was running behind me instead of with me, and I felt in his path on the jump line.  Still, he qualified - good boy! 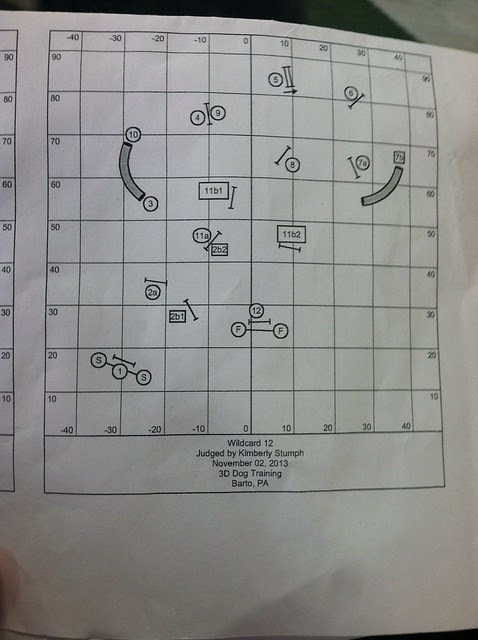 Last class of the day was Wildcard Level 3 for Molly.  We were all super tired.  Molly sat on her start line stay, I had to tell her three times to jump before she moved!  Then she was very slow.   When we came to the last tunnel on the course she missed the tunnel entrance and ran around it.  I called her to me and she jumped on TOP of the tunnel and then ran into the wrong end.  No Off Courses allowed in level 3 Wildcard so we NQ'd.  Crazy girl. 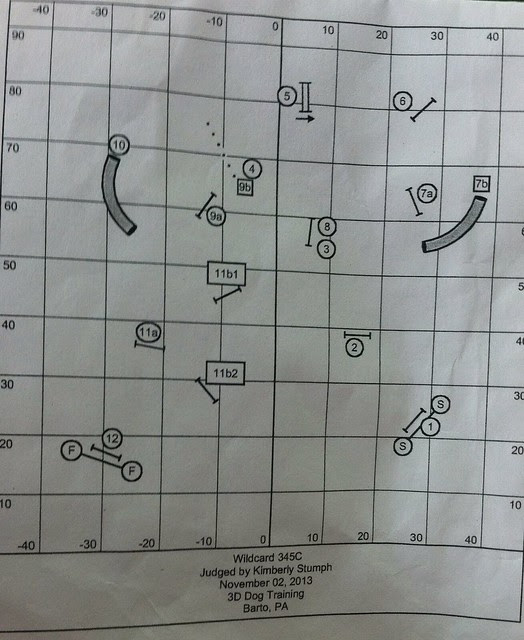 Posted by dogbird daily at 6:19 PM