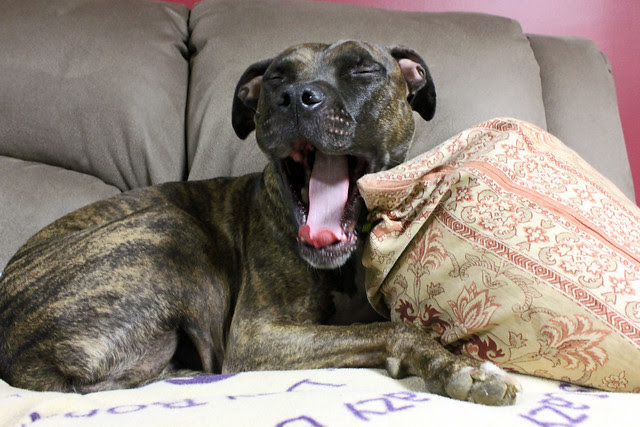 Yaaaaaawn!  Molly is snoozing it out on the couch after her day of CPE Agility.  Five runs!  We were 3 for 5 today.  I just want to say that on all four of the games that end with the table, Molly jumped on and STAYED on that table until I released her.  I used to just let her bounce the table, but since we are going to be doing more AKC, a table stay is a must and allowing her to bounce it in CPE cannot continue.  And a bad habit of mine is that I see in a video from today and also the AKC video that I have included that I say "Molly, weave!"  I should not be saying her name like that.  I should just say weave or indicate what to do with body language.  Saying her name probably throws her off and confuses her.  BAD HANDLER.

Started with Fullhouse Level 4, the first round.   And ... WE NQ'D!  Molly has not NQ'd Fullhouse since March so I was feeling a bit grim for the day ahead of us.   She got 23/25 points, not quite enough.  There was a lot of zooming, a lot of sniffing the new surface.  We came up the right side of the map, took the dog walk (got the contact!) then she charged halfway up the Aframe and from there it was insanity.  Twice she charged the dog walk laterally and bounced off of it, choosing to sniff the area behind.  I was worried she would hurt herself to be honest.  I threw her into tunnels as she would obey.   The center where the trial was held just laid down new surface, and many dogs were sniffier than usual, Molly was no exception. 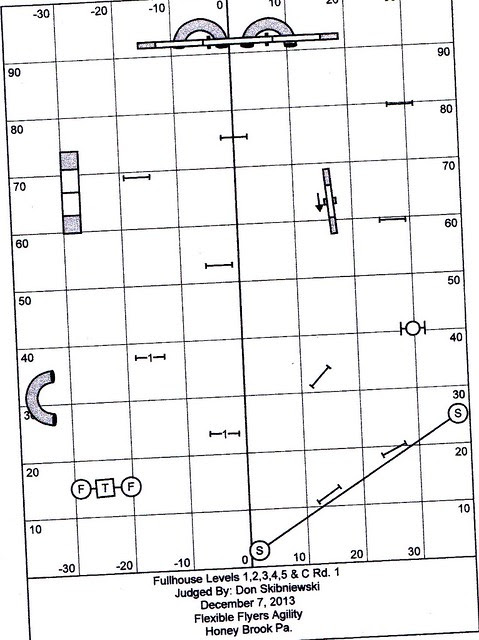 Next was Jackpot Level 3.  It was a "non traditional jackpot", so we had to gather our points and then after the whistle "collect two one point obstacles, and one three point obstacle."  Oh and by the way, we were not allowed in the tunnel that was wrapped around the table.  Great.  We had a talk about it and Molly promised me that she would never go into that tunnel, she would go on the table.  We got our points by circling around the teeter and double jump, collected our required Jackpot obstacles.  I collected her.  We walked slowly to the table, I asked her to "Focus" twice.  I pointed to the table and told her to "table."  She blasted into the tunnel.   Aaaaand NQ!! 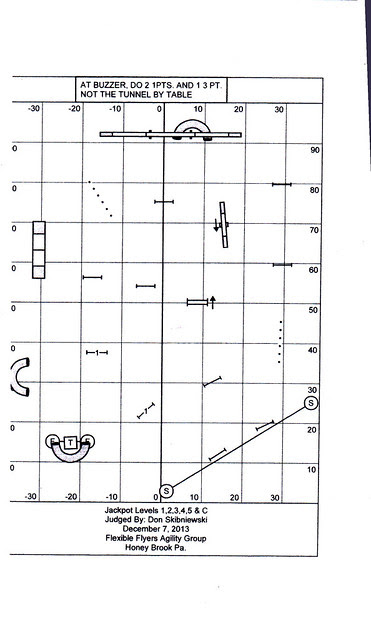 Standard Level 3 was next.  My mother arrived to watch the festivities and filled Molly up with a bunch of "lucky animal crackers" and darnitall if she didn't run a beautiful clean Standard??  Wish I had it on video!  I was going to lead out and start with her on my right, but the upper level Standard had the same opening and they were all running the dog on the left and rear crossing 4.  I did that and it worked really well. (other than some sniffing at the teeter.) Contacts were great.  Discrimination at the 6 tunnel was not an issue.  Front crossed after 7 and ran up that jump line into the 10 tunnel (I knew she would take the wrong side or be confused if she was on my right.)  Blind crossed and back down the line .  Aframe contact was very pretty.  She blew past the weaves but did them when I brought her back.  I was grateful for the simplicity of Standard, the games get to be mentally exhausting after a while. 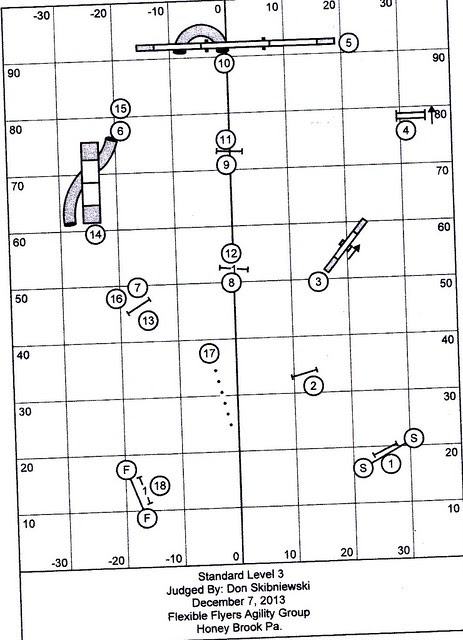 Snooker Level 3 was next.  I made up a plan that I was mostly happy with except the opening and went with it.  I had to hope Molly ran as well as she did in Standard, and that I didn't mess anything up (when I mess up is when Molly starts to get wild.)  It went great!  The only hiccup was that Molly ran up behind me after the first red and was almost over that 4-jump when I (have to admit) yelled "NO!"  she stopped dead in front of that jump and ran just as planned...under time...41 points.  Perfect girl.  (Well, she missed her weave entry.  It's a process!)
I cannot even express how astounded and proud I was that Molly Q'd in this class today.  We could never have done that back in February when we started this trialing madness.

My mom got a video (texted to me so not the best quality) of Molly and I doing the closing. 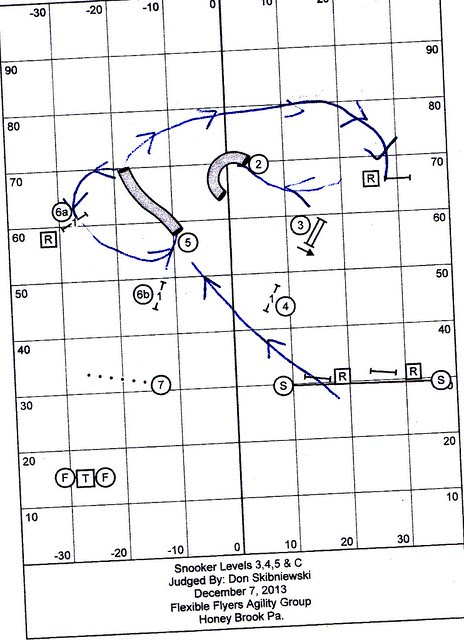 And then we got a special treat, a bonus round of Fullhouse!  This time things went much better.  Again, video included.  We did the outside ring up the right side, the inner tunnels and then a combination of the double jump and more tunnels.  I sent her over the double jump the wrong way two different times for 0 points, but that seemed like a better choice than pulling her out around it and ruining her "flow".  This time we got 30/25 points and a Q! 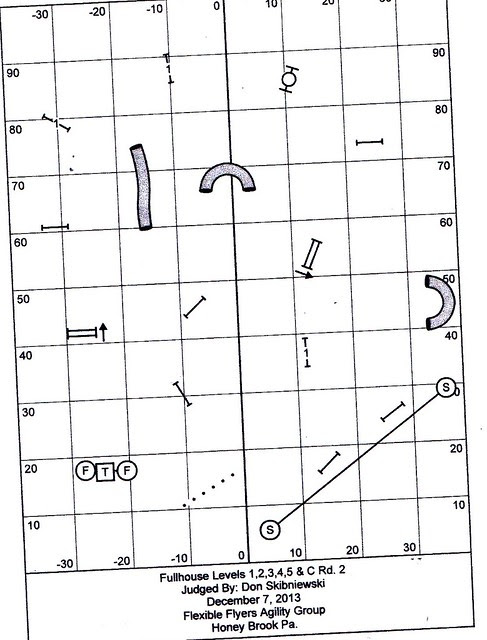 So that was our day!  Is it wrong to already be excited about playing CPE next Friday and Saturday?  'Cause I am.  There is title potential next weekend.  But we have to get two Jackpot Q's and a Snooker Q.  Gulp.

And tomorrow we take World Cynosport Rally!  Mr. Ein has ARCHX potential, RL3 potential and a Vets run!  Molly debuts in Level 2!  I'm going to need a weekend to relax from all of this trialing!

In other agility news, I: bought a video of Molly's second NAJ leg from last weekend's trial-

And we got CPE title certificates in the mail!  Apparently the owner of CPE has been a little behind lately so we got a whole bunch at once!
Ein was more than happy to pose... 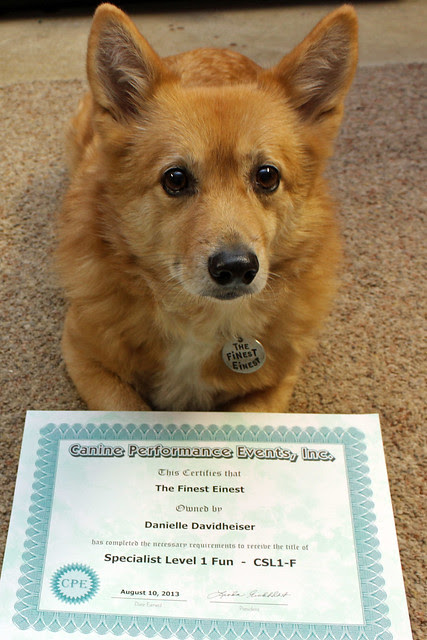 And Molly couldn't be bothered to stir, beyond staring angrily off into space. 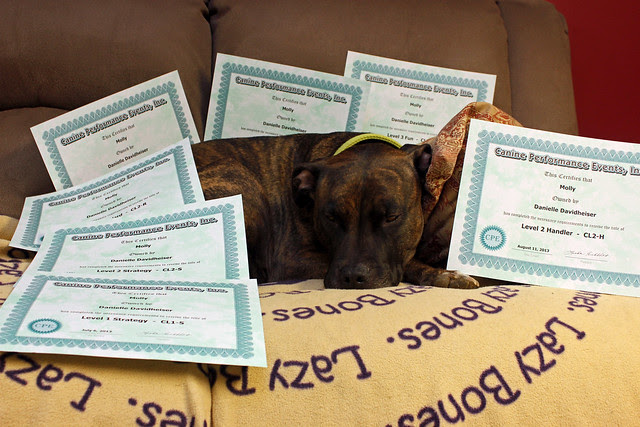 Posted by dogbird daily at 3:36 PM