Today was our final agility trial of the year.  AKC, a Standard and a JWW leg.  I have to admit that I was feeling a lot of Pressure and Expectations for the JWW leg because getting that Q today would mean earning Molly's NAJ and earning her first AKC Agility title.

This was a one ring trial, so there was no FAST or T2B offered.  They did JWW first and then Standard, Masters Open and Novice.  I arrived around 10 and waited about an hour or so for our class to start.  That was perfect.   The crating area was packed, the parking lot and grassy fields were full (and muddy).  I was grateful to have some time to settle in and get Molly acclimated.  She was very aroused by the closeness of the dogs, the noise and the amount of people.  I walked her around a lot, outside and in and played on the practice jump and hoped it was enough.  It was.

Jumpers with Weaves was first.   I led out, picked her up on my right and rear crossed the number 4 jump.  She flew away from me and looked like she was going to run around the side of the 5-jump to sniff.  I stopped running and prepared to avoid a back jump (there are no wrong courses allowed in Novice JWW!)  And this is what I mean when I say that I need to start trusting Molly.  That dog took the jump!  She took the jump as absolutely far as possible to the left as she could without slamming into the jump standard, but she took it!  And since I hesitated, she spun in front of the next jump and ran off sniffing and we got a refusal.  But that's allowable - we get two!  She got her weave entry of course and did them nicely.  The rest of the course was easy peasy, she ran that ring around the tunnel beautiful and finished out with no more excitement.   AND THEN WE GOT OUR TITLE.

After that was Masters Standard, predicted to last a good 2-3 hours.  Yuck.  Gifford Pinchot State Park is less than 10 minutes from the trial site, it was nearly 70 degrees today, so I took Molly for a few ball throws in the lake and a walk.  I probably sapped her energy more than I should have with another run, but you know what?  She deserved to do her favorite thing in the whole world (ball) after being such a good girl. 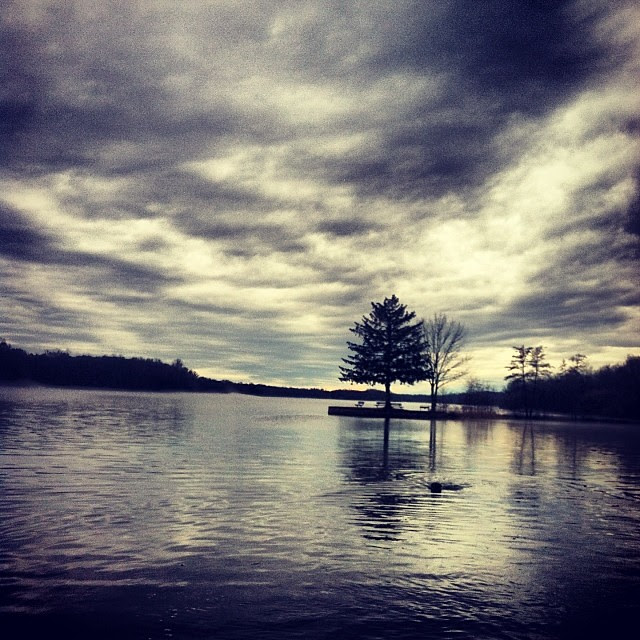 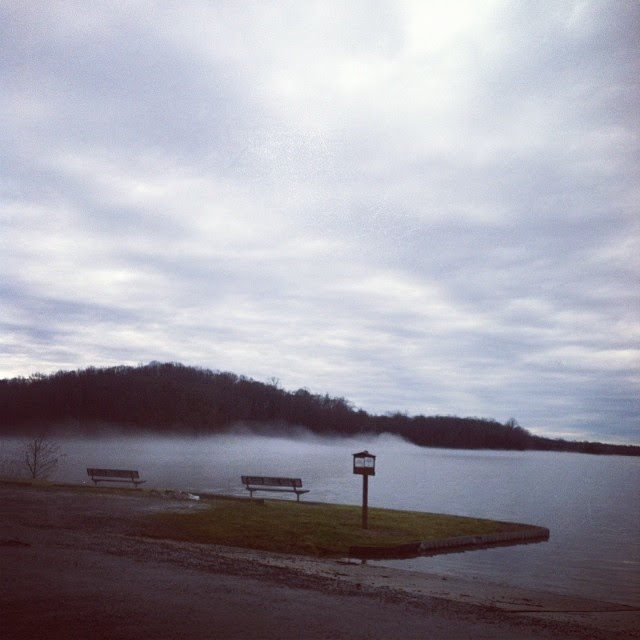 The lake was deserted except for two guys fishing far away from us.  It was quiet and a great break from the chaos of the trial atmosphere.  I threw the ball for Molly about 6 or 8 times but the water was very cold despite the warm weather and Molly doesn't have much brains or hair when it comes to her passion for swimming and ball fetching.  I pocketed her ball and we went for a quick stroll on the Lakeside Trail (Ein and I walked around this entire lake together about six years ago - 8.5 miles of fairly easy walking.  The trail does go through the campground in an area where pets are not allowed, however.) 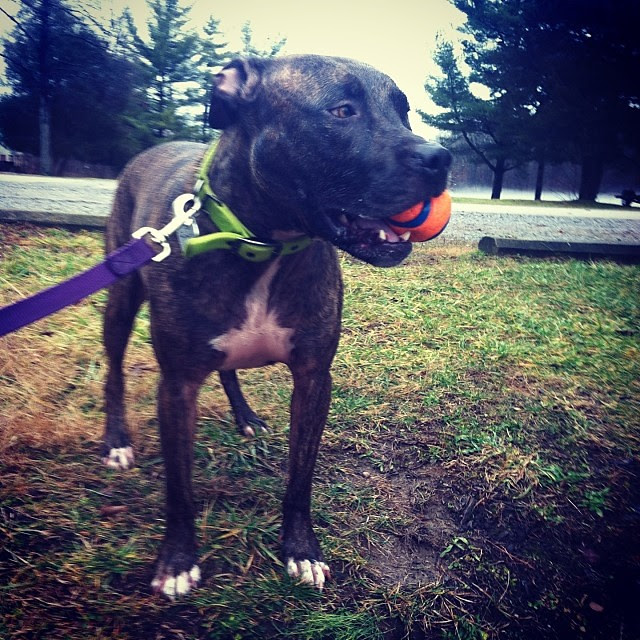 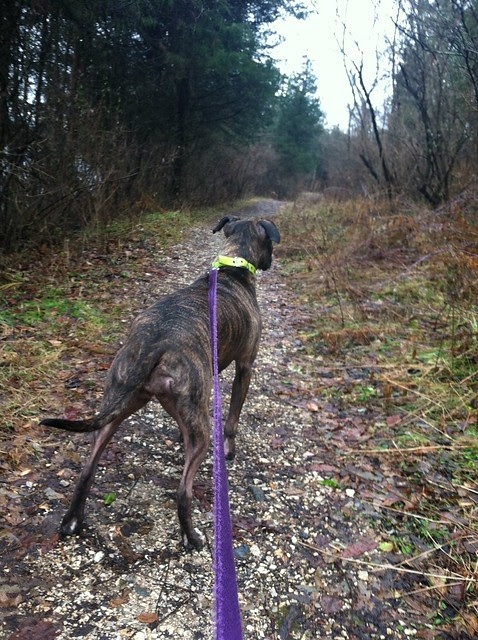 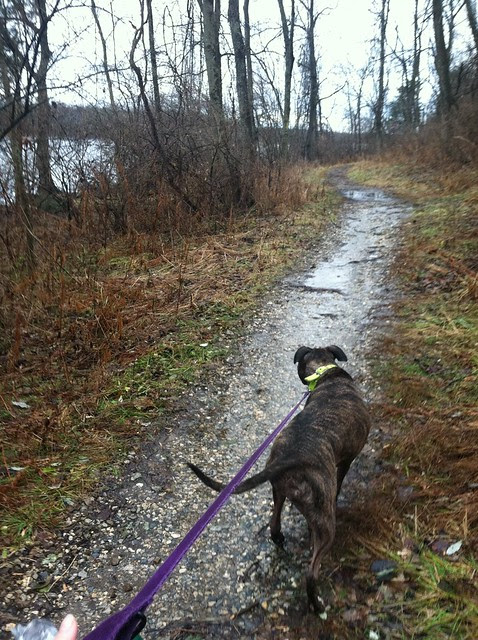 I could have walked longer but back to the trial we went.  The Masters class was in the 16" dogs so I watched that and the ran leashes for the 20"-24" dogs.  I cannot imagine running a Masters course with Molly.  WOW.  So much tricky. 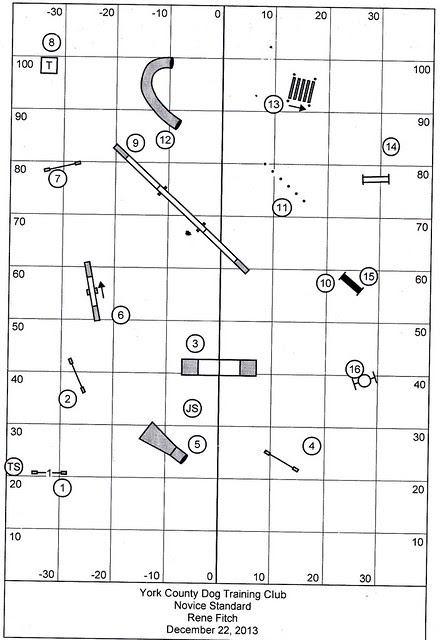 It wasn't long before Open was done and then Novice.  The trial site was extremely emptied out so I moved my car up to a nice close spot for loading all my agility stuff into the car.
Standard made me feel upset.  It confirms some of my prior concerns in my recent post "Crushed".  Molly has lost her confidence on the contacts.  She is not afraid of them, of course.  She knows that I expect something of her.  She seems to think that I want her to stop at the top of the Aframe and wait until further notice.  Somebody who watched our run said that as soon as Molly got to the Aframe she began licking her lips and looking stressed out.  And as is usual when Molly gets stressed (whether my handling is the reason or something else), she did something erratic.  I coaxed her down the Frame and she came down on the contact and then shot off towards the tire.  I called her name to come back to me and she did, thankfully before she got to the tire.  We continued to follow the numbers.  She did a great table stay but yawned.  She went up the dog walk and slowed down hard on the top.  I told her she was a GOOD GIRL! and she sped up.
My plan for 10 was to Send her with Out, Front Cross and do the weaves.   What I did instead was to run with her to the jump, then did the front cross and by that time she had taken an off course jump.  My fault.
She was now moving very slowly after the tire call off, the two contacts and the wrong course call off.  She did her weaves, slow.  When I told her to go to the tunnel you could see her sprout wings!  She looked so happy and she flew in there and over the broad and the triple.  She flew way out ahead of me and took the panel but turned to find me and took the bar.  We would have Q'd (with a wrong course fault) if that had not happened.  I didn't quite understand why she took the bar until the same person who remarked about Molly's behavior on the Frame told me that the whole thing was "weird".  That her take off was strange because she wanted to take the jump but was looking back for me.  If I had used our "Out!" command for the triple and then gotten myself running, that would have been perfect.

I am afraid to use "Out" in a trial!  And did I not say I was going to trust Molly, throw caution to the wind and just try things out?!

I am very disappointed in myself after this run.  And I really want Molly to feel better about contacts.
We have a fun run with our club next Saturday, and agility classes start the following week.  I think that I would like to use her Rip N Tug to build value and a positive experience back into the Frame.  As much as Molly (used to) love that Frame, it gives us more trouble than any other obstacle...  I feel very sad about this problem.

BUT I FEEL VERY HAPPY THAT MY GIRL GOT HER NAJ!  AND I AM A NOVICE A AGILITY HANDLER NO MORE! Posted by dogbird daily at 5:31 PM