Things We Are Afraid Of: Dark Tunnels

Maybe there are agility dogs who took to tunnels like a fish in water.  None of my dogs were that type of dog.  Nope, not even Molly.

It went without saying that Ein would be afraid of tunnels.  I mean, he used to be afraid of cups, so a long dark tunnel?  Well, that's asking a lot.  On the list of Agility Things Ein Hated, tunnels weren't on the top.   The teeter was at the top, followed by the weave poles, then probably the chute.  But he was no "tunnel sucker", that's for sure.  We quit agility school last autumn and since then he surprised me on that one beautiful day on the agility field at Glen Highland Farm by being fearless on the agility equipment, tunnels included.  He has done two trials since then without tunnels being an issue. 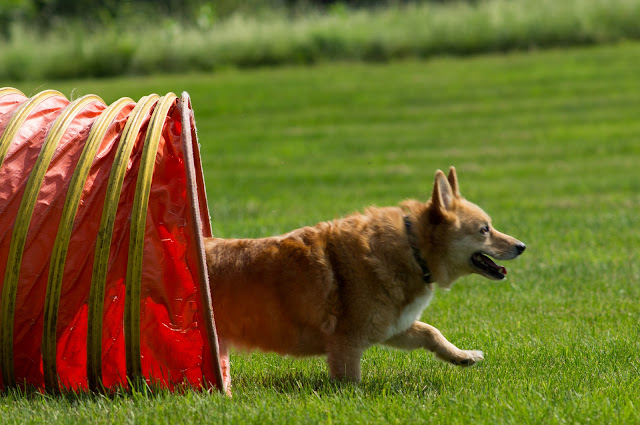 Fearless Molly used to refuse tunnels!  She would take them no problem, and then a week later she would outright refuse them.  The fix was as simple as buying our cheapie at home agility tunnel for forty bucks.  A handful of sessions in that thing and she is most definitely a Tunnel Sucker and never looked back.  Molly's confidence isn't terribly difficult to build up. 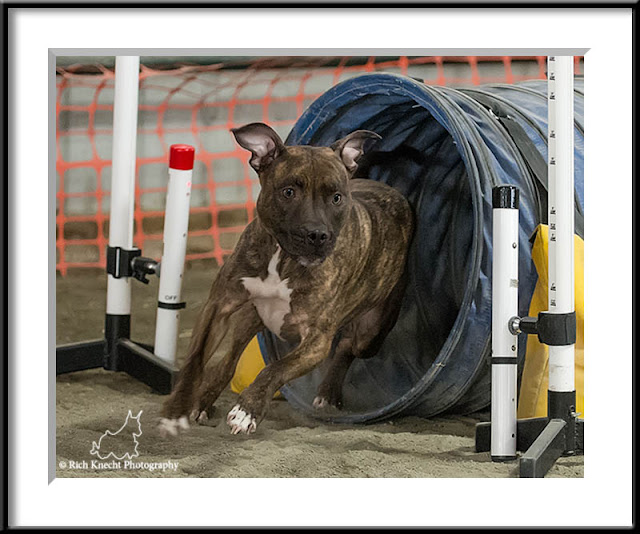 And then we have Perri.   Quite contrary.
On Perri's list of Most Horrifying Agility Obstacles, tunnels and chutes are probably at the top.  Every week in class when we were waiting our turn for a sequence, we would practice on a tunnel somewhere else on the course.  Different colors, different shapes (straight versus curved.)  Some weeks she was okay with the tunnels, others she would refuse and need more encouragement.
We practice at home with our cheapie tunnel.   Same thing.  Sometimes good, sometimes refusals.  I may or may not have been seen crawling inside of the tunnel and inviting Perri into it for a nice snuggle and Everything-Is-Safe-In-Here pep talk.  As if the neighbors weren't fascinated enough by my training sessions.
And we are still working on it.  About a month ago Perri had an assessment with an agility instructor who teaches at the club where Molly takes agility lessons.  Perri was nervous about playing agility in a new place but quickly warmed up to most everything, even the teeter.  Everything except a dark blue tunnel in the corner of the room.  I could beg and plead all that I wanted.  Perri would not go in that tunnel and the stubborn pudelhund has spoken!  And I felt crushed, but determined to improve.
It's not just tunnels of course.  When Perri's confidence drops she runs out jumps, paralyzes on the teeter, creeps on the dog walk, clatters the broad jump.  It's life with Perri right now.   Hey, at least she likes the Aframe.  But tunnels are the one thing that I can count on her to balk at.

While I have been working the tunnel outdoors with Perri a lot, I finally did something tonight that I said that I would do after Perri refused that dark blue tunnel on her assessment.  (and dogs do discriminate on tunnel colors!)
I brought the tunnel into my dark basement, covered the entrance with a blanket, and had a fun session.  All three dogs were involved!  You do the tunnel, you get a piece of cheese.  Molly was a whirlwind, Ein was Mr. Serious and Perri made many many confident passes through the tunnel!  I will not be fooled into thinking that she is over her tunnel fears.  She's probably not even close.  But I was proud of her for going into a dark tunnel in a dark room, over and over.  One day at a time.  Building tunnel confidence. 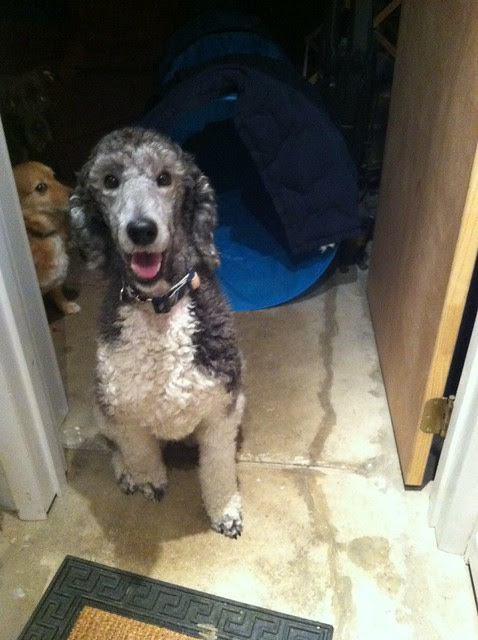 Posted by dogbird daily at 6:08 PM