"You should be sweating when you come out of the ring with a standard poodle..."

Based on Perri's performance at the December Rally trial that we went to, I had a plan for today's double Rally-O trial.  The plan was to complete our third Rally Novice leg in the first trial and to then debut in Rally Advanced in the second.  But things don't always go according to plan.

I arrived an hour ahead of schedule, set up the crate and warmed Perri up with some chicken bits.  Walked the course.  Fortunately the two dogs directly ahead of us were a large black lab followed by a wildly out of control and unfocused yellow lab.  Perri was concerned.  We headed into the ring and I could tell I was in trouble.  Perri was not connected with me.  She did the first sign okay but after that she hit the end of the leash twice and we lost tight lead points.  She was sniffing majorly in the corner and just standing and staring around.  She came back to me quickly but as I walked and called for her attention I...walked right past the third sign and did not do it.  I almost crashed into her on the 270 degree left because she walked right up to the ring gate and stared at the horrifying cluster of dogs in the crating area.  THEY WERE GOING TO KILL HER.  I down'd her for the walk around and she yawned with a dramatic head shudder, but she held her stay.  Everything else was fairly okay.  I was cringing internally at our score and as I did the Halt-Left Turn-Forward I noticed at last that I had missed a sign.   Way to go, I just NQ'd Rally Novice.

And to continue on our streak of awesomeness Perri and I came back to her crate.  She drank eight gallons of water.  I lifted the blanket that had been covering the crate so that Perri could see the trial and possibly become more acclimated to it.  A dog sniffed her crate when passing by and Perri nailed the mesh door snarling and put a puncture hole in it with her claw.  Twenty minutes later her and the neighboring crated boxer had a similar exchange.  If I wasn't embarrassed about the NQ, devastated that my brave Rally girl was not able to focus on me to save her life...I was shocked and crushed that she was exhibiting crate aggression.

So, we just went out in the snow to blow off some steam.  We were at that trial to have some fun and we were gonna have it, dammit!  I took her squeaky tennis ball and her tug toy out and threw the ball over and over.  Perri loved it!  She was pouncy, digging rapture once we got outside.  Perri has such an ability to cheer me up and make me laugh even when I am sad, and I am not just saying that.  My hands were frozen since I forgot my gloves inside (a move almost as stupid as missing that rally sign.) but I kept throwing the ball because it is addictive to watch Perri pouncing and see her mood lift from her! 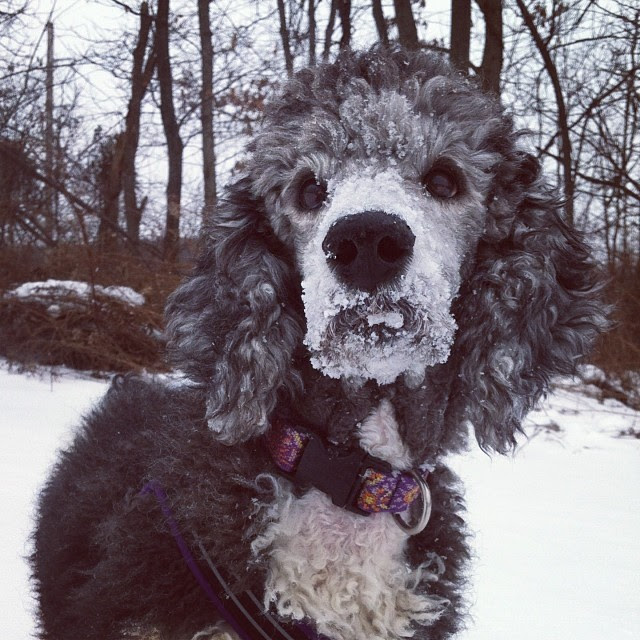 We went back inside to thaw out.  I read my book.  Drank some coffee.  I spoke in length with a ring steward who had complimented Perri on our way in to the ring.  We talked a lot about poodles.  I know that poodles are smart, and I have heard more than once that people believe parti colored poodles are smarter than solid colors.  Whether that is true or not, our ring steward poodle friend (RSPF) also believes this to be true.  I told her of some of the troubles I am having with Perri.  The shutting down, the focus disconnect.  I told her I feel very overwhelmed by Perri, that I feel like I am still getting to know her, that I feel like she is an alien dog that is from another planet.  RSPF said that poodles really are a type of alien.  They are different than other breeds.  They really really are.  She said that poodles are one of the dog breeds that actually analyze what they are seeing.  She said Perri may be going through a type of adolescent fear period.  She thinks that the noises above all things are what makes Perri nervous.  She said to give her a few months and I may really begin to see a change in confidence.  She says I need to move quick, keep her attention and keep her mind busy.  I need to work hard.  She says I should be sweating when I come out of that ring.  She also said that I need to learn "ring craft".  All of these things are so very true that it hurts.  This is silly but I literally felt myself choking up with poodle pride, misery at my own short comings and hope for the future.  I feel like I need to close my mind off from my surroundings much more and get more inside of Perri's world, inside of Perri's head.  That may sound stupid, but I believe that it is true.

Before I knew it, it was time for round 2.  I was a mess.  How embarrassing would it be to NQ Rally Novice twice in one day?  Perri was so distracted and that was discouraging for me.  I had gotten her to actually play tug in the breezeway to the trial area and that was a really good thing.  It took a lot of teasing, chiding and work to get her to loosen up and tug with me but once I got her in the mood she was really into it.  Before we went into the ring I tried to totally focus on Perri.  We did little pivots like we have been working on at home.  To my surprise Perri would stare at me and then do the pivots!  Each time she would successfully pivot she was really focused on me and nothing else, and she seemed much more relaxed by that success.  I tried to focus on her and not "wonder what people thing of this strange little game I am playing."  Because I want Perri to focus on me, so I should be totally focused on her.  Right?  Right. 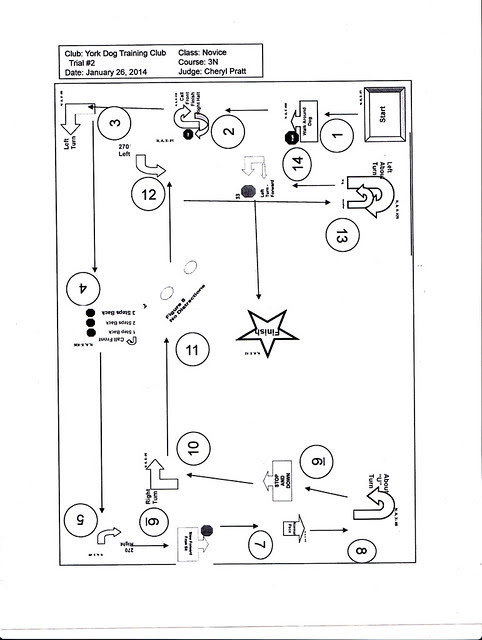 The course was fine.  I tried to get in that poodle head.  I stepped off fast.  If I felt myself fall into being slow and waiting for Perri I gave a leg slap and called to her to pick it up.  And she did.  I was not sweating coming out of the ring but my hands were shaking.  Which is ridiculous given how much rally I have done.  We lost three points for lagging and got our third RN Leg with a 97/100.  To get in the ribbons we would have needed a 99, since there was one 100 and three 99s!  Perri was in imaginary fifth place though, I did take notice!

So.  Positives about the NQ.
Our score on the first course was probably 90+ but it wasn't a 97.
I was nervous to move up to Rally Advanced today, and we did not have to do that.
I really felt comforted and encouraged by RSPF and was very glad to have met her and spoken with her. 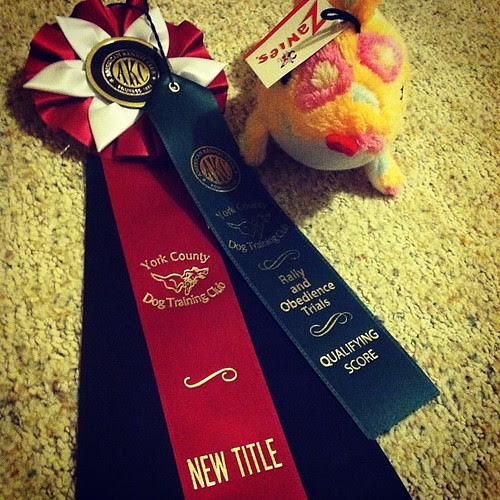 So Perri has a lot of improving to do.  And so do I.  Handling a dog is hard.  A lot harder than I realized before I become addicted to all of this.  I would like to become a better handler.  A better, focused person.  A person who can devote herself entirely to her dog in that ring.  I will get there, one day at a time.  Rally Advanced debut is likely in April.  There is a Poodles Only! double Rally trial within driving distance and I think that I would really enjoy that.  We've got work to do as ever!
Posted by dogbird daily at 7:52 PM