I survived the CDSP trial!  (No shocker there.)  I focused really hard on making a fool of myself with my dogs and giving myself to them completely before and during our runs.  They deserve that!  I tried to remember to smile.


Ein was the first in the ring.  He was stress panty and his weird leg was shaking and as I said yesterday, he has never done super at this venue before.  His heel pattern was surprising to me!  We did lose some points for lagging, but he nailed all his sits and there were more than a few moments where he was heeling head up and laser corgi focus on me instead of trudging beside me or stress lagging.    The Figure 8 was incredible for Ein.  Again there was some lagging, as always.  I chose to walk to the right and have him on my outside for a change.  I walked briskly and instead of dipping my shoulder to look for him I just took a leap of faith and walked the figure 8.  He stayed with me the whole time and was actually heeling with a smiley face!  I was so proud I could have fainted and called it done and good right there and then!  The Stand for Exam was the bumpy part and we lost some points there.  I gave him a re command to Stay but he still moved some paws and acted shy, but the judge was able to do her touching and we passed the exercise.  Whew!  The recall over bar jump was great , though he did come in crooked after the finish.  Hey, I'll take it!   The Honor Stay was unremarkable.
There were no re-cues due to anxiety stressing, no staring into space and shaking and shutting down.  Ein was working it and he really seemed to have a good time.   We got a 187.5 and his CD-C title!   That's no fancy score, but it's Ein's highest Obedience score yet and I am super proud of him! 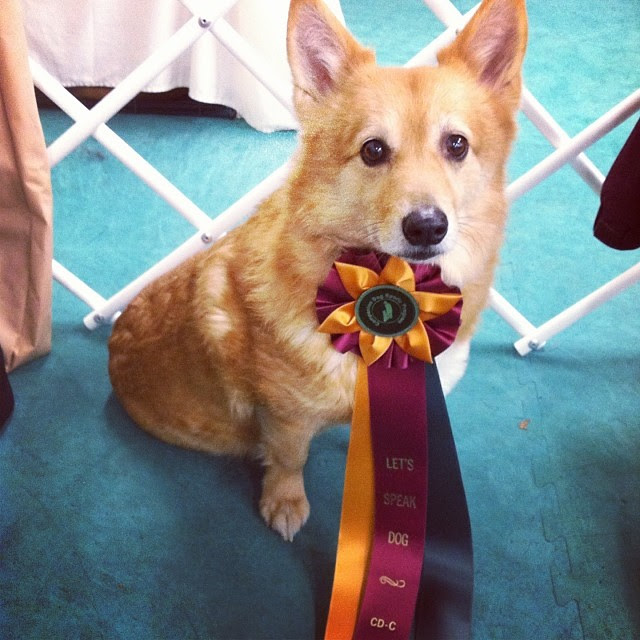 Perri was next.  And Perri was Perri.  When we first got there she was totally happy and willing to work and I thought, "We are going to have a good time in that ring."
Sure enough, ten minutes before her run I brought her out of her crate and I had a different dog on my hands.  Watching the other dogs, worrying, totally stoic with that tentative look in her eye.  Did not want to play with her rabbit fur tug.  Great.
I tried hard to get her back, but to be truthful, these shifts in Perri's mental state and the disconnect that I know is coming in the ring stresses me out too.  I'm only human.

The heel on lead wasn't pretty.  We lost 5 points.  She was pretty gone on me when we started "heeling" and when the judge called halt she walked past me a little.  This is "normal" for Perri.  She zones out on me and floats around and when the judge calls a halt, she continues looking around.  I was very surprised when she actually looked back at me and rotated back toward heel position and got her sit.  Hmph.
The Figure 8 got us.  I again went to the right, dog on the outside.  I thought, "This way, Perri won't be able to sniff the ring steward's ass on her way by and get lost there."
Fat chance.  She heeled a few steps, stopped dead while I kept walking, and lodged her nose into the steward's ass.  I walked the whole Figure 8 alone.  I started the second pass around the Figure 8 and said "Perri come on."  She looked up at me and it was like a lightbulb went on.  She did her prettiest Figure 8 ever after that, head up and staring at me the entire time with a nice sit at her halt.  Too bad she trashed the first part of the exercise.  It's stress.  I know that.  It's also super embarrassing.  Why can't she scratch her ears or sniff the floor like a normal dog does when she is stressed??
The Stand for Exam was absolutely flawless.  So was the Recall over Bar Jump.  She did do some ear scratching twice in the Honor Stay but did not break her stay and she did pass the exercise.


I have no idea when Perri is going to be able to go into a ring and not sniff ass or floor and just work with me.  She clearly is unsure of just what exactly her job is and until that time, we are going to have to not enter even CDSP Novice.  (I say "even" not because it is not challenging, but because being able to praise Perri is not enough support for her right now.)  I have already entered her in WCR RL1B class in March and I am unsure about proceeding with Rally Advanced in April.  I just want her to be more solid.  I enjoy getting good scores, I enjoy a confident dog, and I want Perri to enjoy our work, too.  She sure is a hard dog to get to know.  However today she did do her SFE, she did recall over that jump.  She didn't plod toward me, she didn't run out the jump (this was a major major issue in the past, even with a 12" height).  She sat at square front and did her finish quickly.  These are all things that Perri did not do months ago, and these are things I should be grateful for.  And I am.  Forward progress means a lot, and I do not take it for granted.   I need to find more matches and focus completely on Perri's problem areas and comfort level, rather than trying to just go through the routine of Novice Obedience.
Posted by dogbird daily at 2:02 PM