The Fire Got Lit Inside a Bright Eyed Child.

Where to start with discussing this weekend?

I am having a lot of discouragement regarding agility lately.  With Molly.  With Perri.  Perri's agility class Friday night was a challenge for her.  She was stressy and her weaves were not as solid as they usually are.  She was popping out a lot  Her sequencing was so-so.  I was trying to handle a serpentine from just one side with her and this is something she has always had a hard time with.  A lot of halting in front of jumps.  The second sequence I forgot what I was doing in the opening.  It is hard for me to handle Perri right now.  I have to gauge her confidence level and handle her accordingly, either with extra support or running like hell and trusting her.  All of this plays havoc with my own confidence, and it makes it very difficult for me to concentrate.

And Molly, Molly has been stressy, too.  She has been mopey and the last two agility classes I have had to tug to get her up to her normal energy level.  And it all just makes me wonder how on earth I ended up with not one, not two, but three dogs that have stress problems?  I feel like they all seem miserable and clearly the issue is their neurotic and insecure handler (who more than likely beats them!).  No, I do not ever ever beat my dogs, but sometimes they act that way.

Molly's trialing has been very hot and cold lately.  The fun match was...not all that fun, or successful.  We did not have a good weekend at Barto in the beginning of January.  We did have a good day at Lewisberry at the end of January.  And on her one year "anniversary" of trialing, she was a mess of stressed up, jumped up off courses and zoomies.  The UKI trial on Wednesday was half and half, a great Standard run and total distraction on Jumping.  And this weekend at Dream Park?  On Saturday she was dropping bars, she was people greeting, she was blowing her contacts to go see people, she was sniffing and simultaneously going deaf and a blind sloth with one leg could weave faster than her.

I am trying to face the facts.
1.  Molly is an under-exercised winter couch potato right now.  That has to change.  How can I ask her to run and jump and be athletic when I barely walk her once a week?
2. Perhaps I am over trialing her?  I am not sure how to answer that question.  The amount of trialing I am doing right now may be too much for an out of shape dog, which Molly is.  On the other hand, Molly needs a lot of trial exposure so that she can get used to the noises and chaos of the trial environment.
3.  I have got to do more work on her reactivity.  I have done a lot of work already and it has done her very well in "pet mode" (see: the recent vaccine clinic!).  But when Molly hears the roar of many many human and dog voices combined and dogs are tugging around her and jumping and moving and then some dog sneaks in a butt sniff or stares right into her eyes?  Well it's all too much.  At the least, she has been howling and whining at large and overwhelming dogs and at worst she has been lunging and/or screaming at the butt sniffers and the starers.
4. On the way to the start line I am usually watching where I am going, watching the judge and ring crew and looking to the timer for when I should start.  And Molly is usually sniffing or gazing at something outside of the ring.  Suddenly it clicked, just this very day.  Why aren't we both focusing on each other?  We are a team and our brains are everywhere but on ourselves.  It has to change.  How could I possibly expect her brain to quickly shift gears to me and an agility course when she is still busy staring at the dog who is exiting the ring, or some friendly looking guy walking around outside the ring?  Asking for that sudden mental shift is enough cause for Molly-Stress.

Today we only had a Novice Standard run and Open JWW.  I didn't feel like going to the trial - a rare emotion.  I was crushed after the day before.  On Saturday evening I actually googled 'dog agility failure'.  (Yes, such a pity party!)
I came across an post on Susan Garrett's blog Failing Your Way To Dog Training Success, and I really really enjoyed it.  I must share some quotes from her post that meant a lot to me.

"Failure is the greatest teacher and although it is often bruising to the ego, it is really a true friend." S Garrett

"I've failed over and over again in my life, and that is why I succeed." - Michael Jordan

Molly and I fail.  A lot.  For so many reasons.  I feel like I am drowning in this dog, I feel like I have no idea how to work with her issues and help her to focus on me and agility.  No idea how to help either of us become solid and predictable.  And for what?  Nobody is forcing me to play agility.  Molly would probably not bat an eye if we never set foot on equipment ever again.  So today when I was standing at the ring gate, clutching my map and watching our course being built I had some tears in my eyes and I did not want to run the course.  Not even a little tiny bit.  I felt completely miserable, like I did not belong and all I could think was, "If I'm not having fun, and Molly's not having fun, maybe I should just stop torturing us both."  When we ran the course Molly got a (jump) refusal and 6 time faults but we qualified.  The run was horrible.  Her nose was glued to the ground, extreme extreme stress sniffing.  Molly is forever my mirror and she was acting exactly the way that I felt.  Stressed, shut down and just doing it because we were already there.  That Q was the worst Q I have ever earned with any of my dogs.  (And Ein and I have gotten some excruciating Rally-O Q's.)

I wanted to scratch Open JWW.  I wanted to scratch, eat a hot dog and enjoy watching my friend run her good dog Luna.  Since Molly was so low, I thought that I had better tug with her before her run to bring her up.  I don't know why, but instead of Molly's braided tug I got Perri's sheepskin tug pouch out of my bag and popped some meatball treats into it while Molly watched.  I tugged a little and then asked her to release it.  When she did I opened it up and showed her the treats and let her lick them out of there.  Just before the Open JWW run I took her over the practice jump and did jump sends and caught her with that pouch and tugged.  She was so happy with this and her tail was wagging and she was soon actually offering jumps.  Suddenly, I had made it all worth her effort again!  When we went into the ring I talked to her all the way to the start line, telling her she was a good, naughty and smelly girl and asking her to focus.  She did do one little sniff but other than that, we had the shaky beginnings of a connection right on the start line.

The run was lovely.  I did a three jump lead out with a total change of direction into the next line of the course (and did I mention there was a tunnel right behind me?  She did not even consider going into it.), my deceleration cues were perfect, she hit her weave entry solid and true on the right side and did all twelve (veeerrry slowly) without popping.  We NQ'd on an Off Course when we were nearly done with the run because my front cross wasn't timed correctly, but I was so absolutely proud of this dog and I that I could have sobbed.  She was having fun, and so was I.  And that's all I ever wanted in the first place.

Dog sports are hard.  Being involved makes me feel like an eccentric in my every day life, like I am an alien whose world is something that few people even understand.  The practice and hard work required to pull off anything resembling success in either the Obedience or Agility ring is incredible.  And if you are an emotionally tattered green handler with a ragtag gang of rescue/rehome dogs with their own range of issues, that training can sometimes leave one feeling like she is spinning her wheels and not having all that much fun.  That's where I was at this morning.  Why bother?  Why even try?  Why can't I ever remember anything I was taught?  My dog is miserable.  This is expensive.  No one even cares if we do well or if we fail.

But this JWW run?  Figuring out how to get my dog motivated to run with me and have fun with me?  Watching how good we looked on that video after just stumbling back onto our feet from rock bottom?  Knowing how much further we could go?  How can I say no to that.  How can I give up on my girl when we have barely just begun?  This is our journey.  I know we both have it in us.  And Molly is the absolute best first agility dog a girl could ever ask for.  She is a mirror, a true teacher dog, and I love her.

These lyrics from the song "Even If It Breaks Your Heart" by Eli Young Band have been moving me today.

"Some dreams stay with you forever,
Drag you around but bring you back to where you were.
Some dreams keep on gettin' better
Gotta keep believin' if you wanna know for sure." 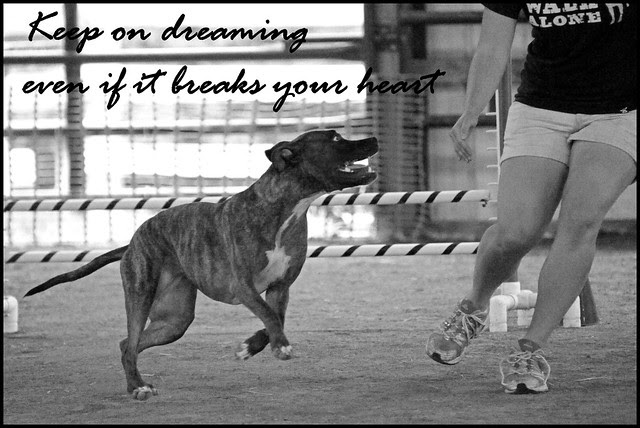 Posted by dogbird daily at 4:07 PM

Email ThisBlogThis!Share to TwitterShare to FacebookShare to Pinterest
Labels: agility, akc agility, it's all about the journey, molly, trials, videos