Well, Molly gave me two nice weekends so her good behavior was not bound to last.  We returned to Dream Park again today.  This was a Friday trial so I was hoping it would be a little more relaxed.  The problem is that I have to drive through Philadelphia on a weekday, yuck.  I left three hours early just to beat the traffic.  I volunteered to run leashes for the Excellent class.  I walked Molly.  I took her to the empty dog park in the back of the place and played fetch with her. 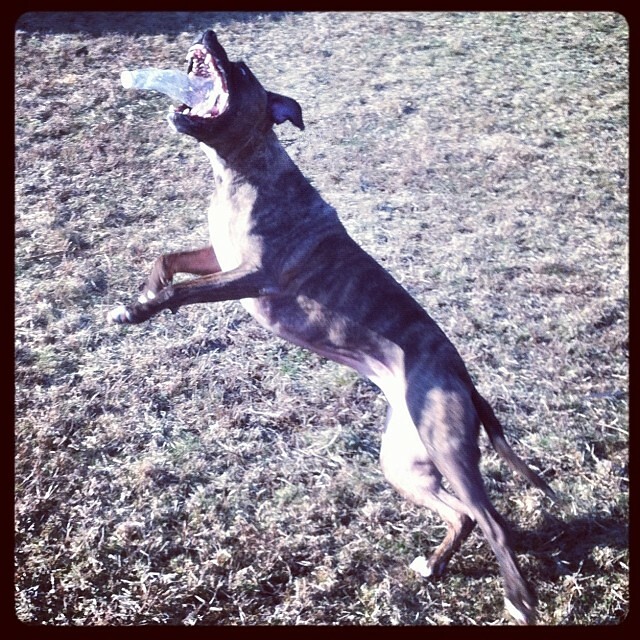 We had FAST first.  A potential third leg.  New title.  The last Novice title.  A pretty ribbon.
The dog before us was a golden retriver and he had the zoomies bad.  Molly was pretty excited about that and couldn't keep her eyes off of him while on the start line.  She didn't want to set up properly (and if you look on the map, I really needed her at a specific and diagonal angle to the triple jump.  When I released her she blasted the triple jump, she flew off the apex of the frame and jetted towards the send.  I called her back because I did not need her going into the Send area and messing it up in her frenzy.  Anyway.  I just kept trying to collect her and she just kept running in circles and being wild.  We did get the Send, 20 points for that.  We got some other obstacles - 26 points worth.   4 points shy of a qualifying score.  I was disappointed but she still did bring it together at the end.  Kind of.  It was easy to blame on her becoming excited about that crazy golden retriever.

Next was Open Standard, our OA debut.  I was a little nervous based on how Molly was acting.  Usually if she starts the day by being unmanageable and faulting obstacles, it continues in the same trend.   And it did.  When she came off the Aframe I wasn't sure if she hit the contact until I saw the judges arms go up out of the corner of my eye.  We fought about doing the fourth jump and she got a refusal on it.  Just running in circles and being a monkey.  She blew past the weave entry, another refusal.  I put her back in and she did some nice weaves.  She did a nice table stay.  Then the next line she came flying out of the chute and ran real wide, refusal on the next jump and into the tunnel.  I did something next that I have never done.  Molly had hopped onto the dogwalk next and was on the upside and I walked over, picked her up and carried her off the course.  The Walk of Shame.  She let out a squeal of surprise and wiggled all the way to her leash and I put her away without her customary meatball at the crating zone.

A fellow competitor says that if she doesn't say her dog's name while he is in the chute, he goes wide like that.  But I have watched videos of Molly coming out of the chute.  She comes out looking for me.  This has gotten me in trouble rear crossing the chute!  She comes out and the first thing that she does is look for me on the side that I was on when she entered it.   I was also pretty far lateral to the chute so if she had been paying any attention at all, she would have seen me and gone over that jump.  Running out jumps is something Molly always struggles with.  She gets crazy and gets going fast and just blows right by them.

I mention this because it made me feel guilty for pulling Molly.  Maybe all that was happening was she was blasting out of that chute wide because I wasn't talking to her enough.  The reality is, the stewards table was there.  The reality is that she was wild.  I was far enough lateral that if she had come out of that chute looking at me, she would have pulled towards my motion and taken the jump.  I know Molly is capable of better than blowing her contact and earning three refusals on only the first half of a course.  She has shown me that.  I have seen other competitors pick their dogs off and take them off the course many times in the past, but I have always just  muscled on.  I don't know if it sends the dog any kind of message at all.  If so, I would have been best to pull her after she flew off that Aframe.  I may well, from now on, instead of babying her Aframe - just pull her off if she jumps it.  She never ever blows the Aframe in class - because I put her back on to it.  Because she is calmer there.

I don't know what the right decision was, but I knew that she was out of her mind and I was tired of running with a partner like that.

Next was Open JWW.  Not a bad course.  I sent her in the tunnel with my left hand and ran to pick her up with my right on the opposite side of Number 3.  She took the jump but then just ran around the next one and...just ran around.  I called her back, and she came back, only to become fascinated by a bottle cap buried in the dirt.  She started digging it and did a little spinny hop which made me say MOLLY! and she looked at me and said "WHAT?" and she took the next jump.  At that time a buzzer in the opposite ring ran and I thought it was me being buzzed off.  I thought it was strange because I didn't think we had taken up that much time.  I walked to get my leash and it was even still at the other side of the ring.  The steward said to me, "That wasn't your bell..."  I was stunned by this and mumbled, "Well they all sound the same, I didn't know..." and I heard "That's a shame..." from someone was we left the ring.  I walked Molly right to the car and felt so absolutely crushed.  Again.

The timer thing didn't matter.  We already had two refusals and therefore had NQ'd before we even did half the course.  It did make me feel stupid, however.  And sad, because my dog who was so good the last two weekends went an entire day with NQ's.  And not good NQ's, like "Oops we ran nice, shame about that one off course."  NQs where I felt absolutely no teamwork or connection.

Is Molly too stressed at this venue?  Many dogs are.  Many handlers will not run there.  It is dusty, loud, and livestock frequents the arena.  My sinuses are burning from the dust, my nose bled on the way home.   The way home took three entire hours due to City traffic and an accident, by the way.  The experience is all something I am not jumping to repeat.  Molly has trialed at Dream Park three times.  The first time she did fairly well.  She qualified 4/5 all weekend.   But our last two visits have been nothing but stressy and erratic behavior and I am not eager to return there at this point.

Good things:
She did her weaves with some speed.
She got the Send in FAST.
I won a 10 dollar Wawa gift card for working the trial.
I took Molly and Perri to the dog park and let them run and play together after the trial.

Posted by dogbird daily at 7:26 PM