I have been telling people for the past few months that Ein is nine.  "He's almost 9."  "He will be 9 in March." "He's 8 ... but soon he will be 9."  Nine.  NINE.  9.  That's official old dog age.  My last dog, Rambo, died when he was 9.  My friend's dog just died at the age of nine.  Nine.  That's a senior dog.  So, maybe I have been telling people that my dog is "going to be 9" for a few months because I need to come to terms with that.  I need to come to terms with my heart and soul taking on that white mask and that word.  Nine.  I'm turning THIRTY this year and I probably care less about that than I cared about 'nine'. 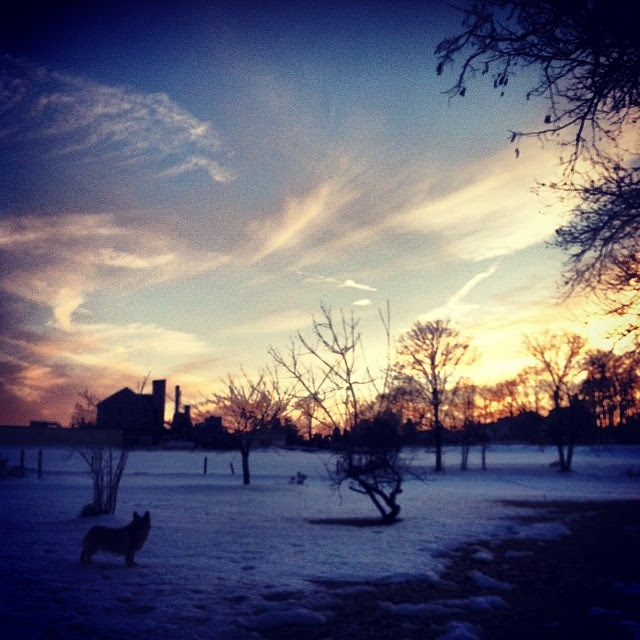 Molly's agility class was cancelled for today.  There was barely any snow in the area that I live in, but further south there was a lot - so it was safer to cancel for all of the people who would have been coming to class.  And I'm glad.  Because my thoughts today were, "What can I do for Ein for his birthday?  A special cupcake?  A toy?  Wet dog food carefully shaped into a "nine" on a plate and photographed with his movie star grin?  Ein doesn't care.  He has no clue he's nine.  And he's got all the food, toys and treats that he could ever want.  So we went for a walk.  Just us.  The girls stayed at home, thank you very much.  And it was so relaxing.  He could pee on what he wanted to pee on, walk at his own pace.  I stopped and petted him and enjoyed his famous "nosehole kisses."  I let him off leash at the one grassy area on our walk and he scampered around and looped back and away from me.  I remembered when he was a pup, before I knew anything about Obedience or about anything I would take him to the big county park and play fetch with him til his tongue was dragging.  Or I would put him in a Sit Stay and see just how far I could get away from him.  I was so proud of his stays and he was so good at them, because it was all a game.  All a trick!  I could get so far away from him that he was just a little red dot on the field.  And I would release him and he would explode to me and jump on my face and lick me all over.  So many golden afternoons at that park playing our games.

I love my little red dog.  And really, nine is just a number.  It's nothing.  Ein is doing amazing, he is in fantastic health.  There is something to be said for having a small dog.  They live longer.  And that is really awesome.  Just this weekend he ran two more courses at the CPE trial and I was floored and amazed and delighted by this wonderful little dog.  Just a few years ago he could not walk into a Petsmart without shuddering and drooling.  And yesterday he ran agility, a sport that he formally was shut down by, in a new venue* with flooring he has never run agility on before.  Ever.  Amazing.  Dogs are absolutely amazing.

Nine is okay.  Nine Fine Ein.  Happy Birthday to the little red dog who has been with me through thick and thin, nearly an entire decade of nosehole kisses, love, support, silly and learning.  Happy Birthday, Mr. Ein!

*(Ein has trialed WCR at this location but the agility room has been expanded and is not at all the same as it used to be.)
Posted by dogbird daily at 5:41 PM

Email ThisBlogThis!Share to TwitterShare to FacebookShare to Pinterest
Labels: ein