Molly and I did not have our best day of trialing in CPE Agility yesterday.  Maybe it was because I wasn't feeling particularly confident or excited about the trial.  Maybe it was because we are leaving for a 5 day camping vacation the next day and I was too focused on that.  Her ring enthusiasm was down, to the point where we NQd the last run of the day (Jumpers) simply because she kept stopping and losing connection with me and we were eight seconds overtime.  The entire day was not an example of the forward progress that I had been enjoying in the "happy in the ring" department.

We NQd Wildcard.  She blasted right past the weave entry, did not even look at it.  Then she stressed hard when I asked her to do the weaves.  We did get a tricky tunnel entrance with me actually handling and turning my shoulders hard instead of talking, so I was proud of that.  But after that moment she sent a bar flying in the serpentine and went straight for the finish tunnel rather than doing the other two jumps.  Oh well.  I'm sure it was all my handling and stress from the poles.

Colors we qualified.  And it wasn't too awful.  The weave entrance (a fairly easy one.) was not noticed by Molly.  I sent her out to a jump and though it seems to me in the video she points her face straight at it and commits, she pulls off at the last moment to go run to the corner of the ring and sniff.   Thankfully she came back to me and we Q'd under time.  (It may be just a little exciting to see three Colors Q'd filled in on our little Level 5 tracking chart...)

Next, Snooker.  I did not like the course, I did not like my plan.  I like to find a smooth flowy plan for Molly and I just could not with Saturday's course.  I did not feel like running this and it probably showed.  We made it through the opening but I felt like I was dragging her along.  I am disappointed in my attempted front cross, and my total lack of handling at our attempted jump wrap for our last red.  Sigh.  And then in the closing I made my best attempt at shoulder turning and decel and she went into the wrong tunnel entrance anyway.  I guess I should have stopped a lot sooner.  The timing is hard for me to get right.  Still, we made it through the opening and half the closing, that's gotta mean something?  A handler asked me "Why did you touch your dog??"  I knew beyond a shadow of a doubt I did not have enough points to qualify, so I did pet Molly.  Shrug.

Jackpot was next.  Non traditional.  The same kind that I totally messed up at the July trial.  "When the buzzer sounds, do three obstacles and go to the table."  How hard could that be?  The issue is, I am not listening to the judge.  My goal for this run was to listen to the judge.  And I am so glad that I did.  The buzzer sounded while I was on the Aframe (er, Molly was on the Aframe.)  I opened my ears and heard a 5!  Had I not been listening I would have assumed that that Aframe was my first gamble obstacle.  I have made this mistake twice in the past now.  As it was, I was listening...we did the closing as planned on the map and we qualified!  First Level 5 Jackpot!  It wasn't terribly smooth and my handling was anything but confident, but we racked up 57 points out of the needed 44, so not too bad! 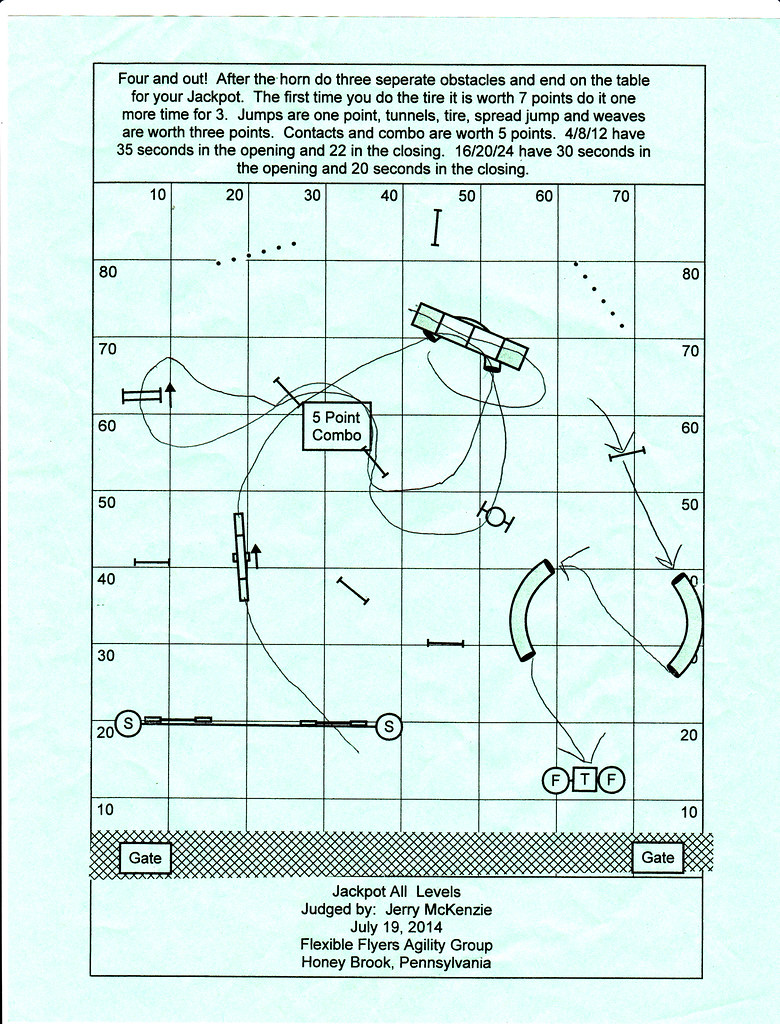 Jumpers last.  The course looped part of the same area twice, a sure recipe for me to get lost.  I did not, but Molly was so slow and demotivated that it broke my heart.  She was moving with me but would have moments of just stopping and stressing down.  My handling wasn't super terrible, I don't know what to think of this.  Other than, it was hot, she was tired and she is burned out.  We NQd for being 8 seconds overtime.  Ouch.  Our time was 43 seconds and clean otherwise.  I again did a front cross and Molly did not follow it at all, I had to talk to her to get her to reconnect.  We have a lot of work to do there.

I was sad after the day.  I was disappointed in my handling in a million ways and I feel like I am never going to improve.  I was devastated that Molly had little to no ring enthusiasm.  After next Saturday's USDAA trial, we are taking August off from agility trials and I feel like this will be a much much much needed break.  We will be doing a rally trial, an obedience match and Perri will be doing a small amount of agility trialing - but Molly gets to take a break.  I want to focus on our weave poles, our front crosses and our contact behavior.  I am hoping to strengthen those areas, I think it will give us a lot more ring confidence.  I hope.
Posted by dogbird daily at 7:01 AM