I have a confession to make.

Just this week I was considering pulling Perri out of Agility class after the current session ends.  Yes, we've had some fun at trials, but she has been more tentative and slow than I would like - however successful she may have been.  Agility class is awful, though.  She shuts down at the drop of a hat, she moves slowly, and I find myself falling into the trap of begging her to do the sequencing work with me.  And I don't like it.  If my dog doesn't enjoy something, we will move on to something else that she does like.  It is hard to make a decision like that, though.  Does the dog really not like the sport?  Or are they just not thoroughly trained?  Ein was the first dog that I trained in agility, and I made the decision to discontinue classes with him and focus on Molly because he did not seem to have the passion for the sport.  A year off and he was happier doing the occasional run at a CPE trial here or there, and so was I.  Finding out how dysplastic Ein is shed a lot of light on why he did not like agility, especially on a weekly basis.  It hurt.

So.  I have a dog who is crawling in class, with moments of brilliance.  And here I am at a crossroads, trying to decide on the best course of action for my dog.  As of mid-week last week, I was teetering on the edge of pulling Perri out of all of her classes (rally-o and agility) when the sessions ended and focusing on shaping tricks, earning some trick dog titles, and building relationship.  I don't like when my dog shuts down.  I want to work through it, I want to do right by her, but I also want to see the forest for the trees.  And for an inexperienced handler like me, that is really really hard.

Molly is steaming through a 13-run three day agility weekend. (Not many Qs, but she is meeting criteria really well, and her stress signals are down - and that is all that I want to see.)
I entered Perri in two classes for the weekend.  She blew my mind.

Wildcard Level 2 was yesterday.  She ran fast and clean with a time of 21 seconds. (Standard Course Time was 45 seconds!)  The only bobble were two minor tunnel runouts, but we corrected them easily and flew through the course.  This is not a dog that dislikes agility.  This is a dog who was having fun and was both following my handling and focusing on the obstacles instead of obsessively checking in with me.

Today I entered her in Fullhouse Level 1.  I sprayed her down with the hose before her run to cool her off.  We played Sit Pretty and Left Pivot ringside and though there were other large dogs crowded around her, she had eyes only for me, and focus only for what we were doing.  Amazing.   And when we got in the ring I could not believe how much dog I had!  We had another tunnel bobble, but no shut down.  Perri ran right into the other end of that same tunnel (and drove out to the Aframe amazingly!).  She did a 180, at a trial!  And not a regular 180, over the triple and back through a tire!!  I did a rear cross!  It was absolutely mind blowing for me.   Perri earned 26 points, she needed 19.  26 points is enough to qualify in Level 5 Fullhouse, but Perri is only in Level 1.


The Fullhouse Q in combination with her Jumpers Q in the beginning of June gives her her Level 1 Fun title.  Perri is 75% of the way through Level 1 already.  She has not NQd.  She has not even gotten any faults.  I think this is completely awesome.  I don't care if she had NQd or earned faults.  But I am grateful and amazed that my girl has accomplished this.  Her confidence has grown at trials rather than diminish.  I'm waiting for the other shoe to drop. 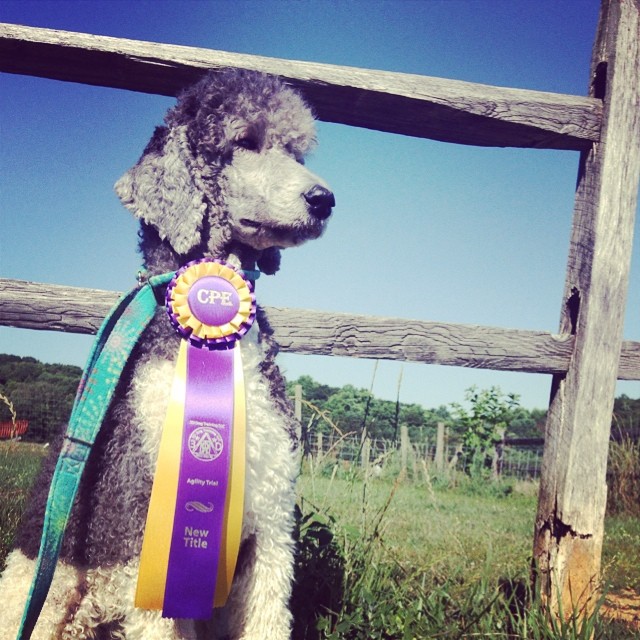 I do not know what to do with a dog who shuts down at agility class, but runs with confidence at a trial.  Continue agility class?  Obviously something is sinking in.  And what of trials?  At this point, continuing our "one a day" strategy seems like a good plan.  Or, we could raise the amount to two a day.  I don't know.  I am becoming curious about AKC for Perri, but I think that it should wait a bit longer.

Last June we did an Obedience match outdoors.  It was hot, Perri was laggy but I will never forget the judge telling me, "You are going to have a great little working dog on your hands some day."

I am absolutely amazed by this grey dog.  And I am grateful to Molly.  Molly, who had and has the resilience to hang in there with me while I learn to handle.  Molly, who shouldered all of my earliest mistakes and failures and never gave up on me.  Molly, who gave me the experience needed to help a much less confident dog find her way.  I still have so much to learn, and my dogs have so much to teach me.
Posted by dogbird daily at 6:09 PM

Email ThisBlogThis!Share to TwitterShare to FacebookShare to Pinterest
Labels: agility, cpe agility, it's all about the journey, molly, perri, trials