I have been wanting to try lure coursing for quite a while now, and since I am not doing agility trials this month I have a lot more weekend days open.  So in the middle of last week when my friend Jennifer let me know that there was a fun run on Sunday, I jumped on the opportunity!

I really thought that Perri would love this activity, if she was not afraid of the flapping plastic bag (she has been afraid of such things in the past.)   Perri loves to chase everything and anything.  With Molly I was not sure.  Molly can be a bit of a lazy bum about things that don't motivate her.  In fact, I drove away without Molly this morning!  She was sleeping on the couch, and as per protocol on the second day of the weekend she did not want to come up the stairs and out to the car with me.  So I left her!   But three minutes from the house I turned right back around and broke up a biscuit and lured her into the car.  Dammit she would have fun when we got there.  And if she didn't have fun there, I had a hike planned for afterwards and I know she loves hikes!

It had rained the day before so when we got there the field was still drying.  I was hoping for this and relieved that the people running the event were doing so.  I worry endlessly about Molly tearing a cruciate or straining her iliopsoas muscle by flying around and slipping or doing a hairpin turn that her mind desires but the body ain't so willing to do.

I of course wanted to watch some runs before bringing my own dogs out.   There was first two "demo dogs", two Westies that they brought out on the field to run the line through and make sure there were no breaks in it.  There were some breaks, but the Westies did not mind chasing and then waiting while the line was fixed or replaced. 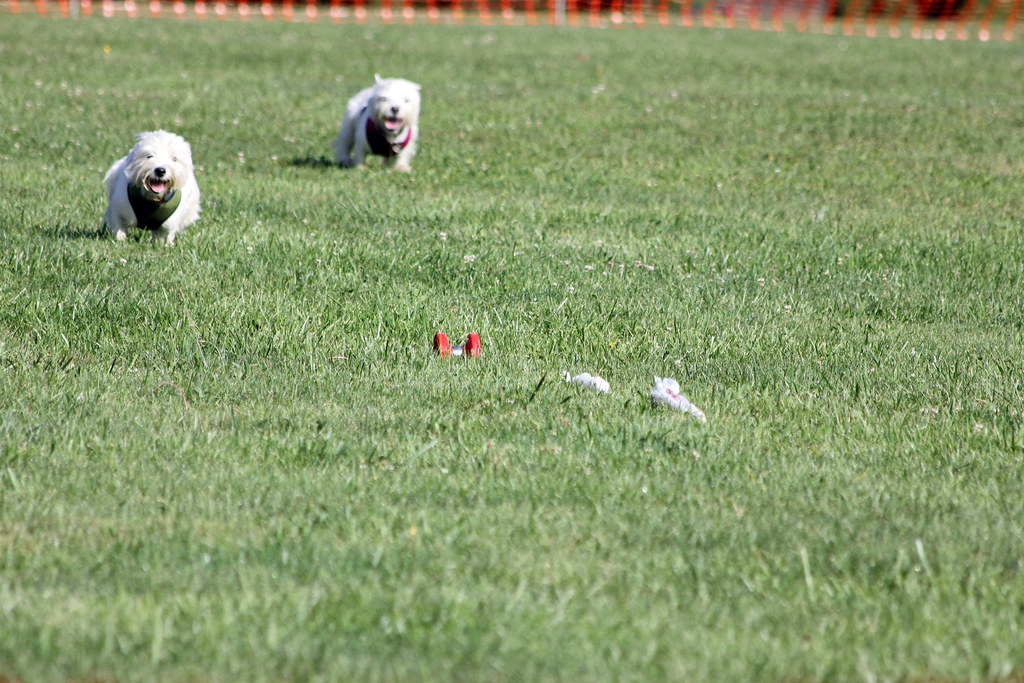 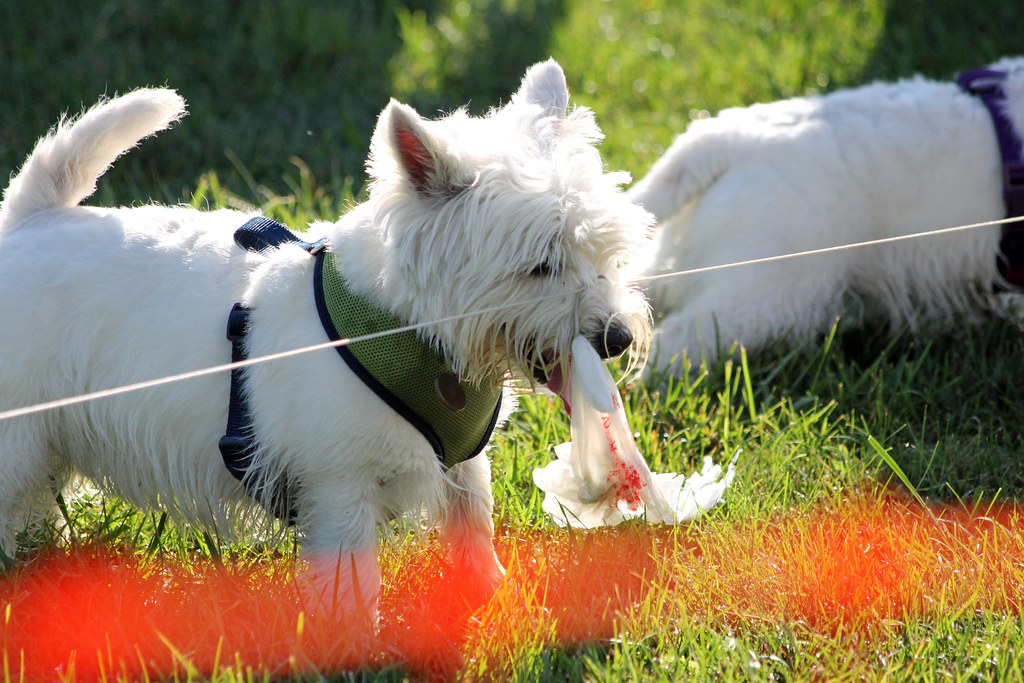 A boxer ran next and she was just as into the game as the Westies had been! 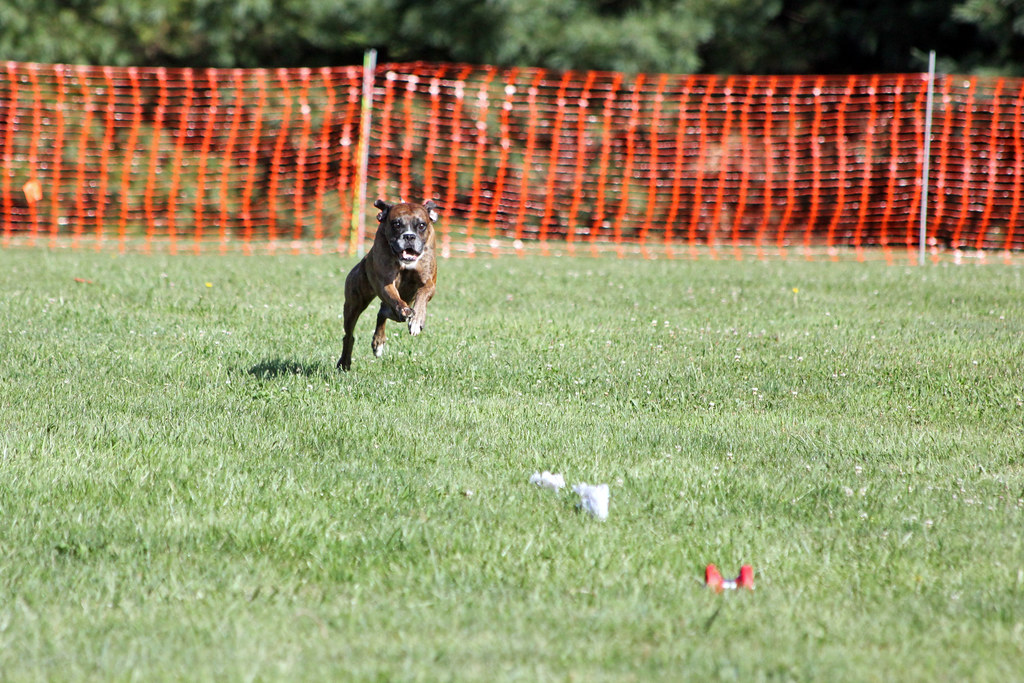 And so very graceful! 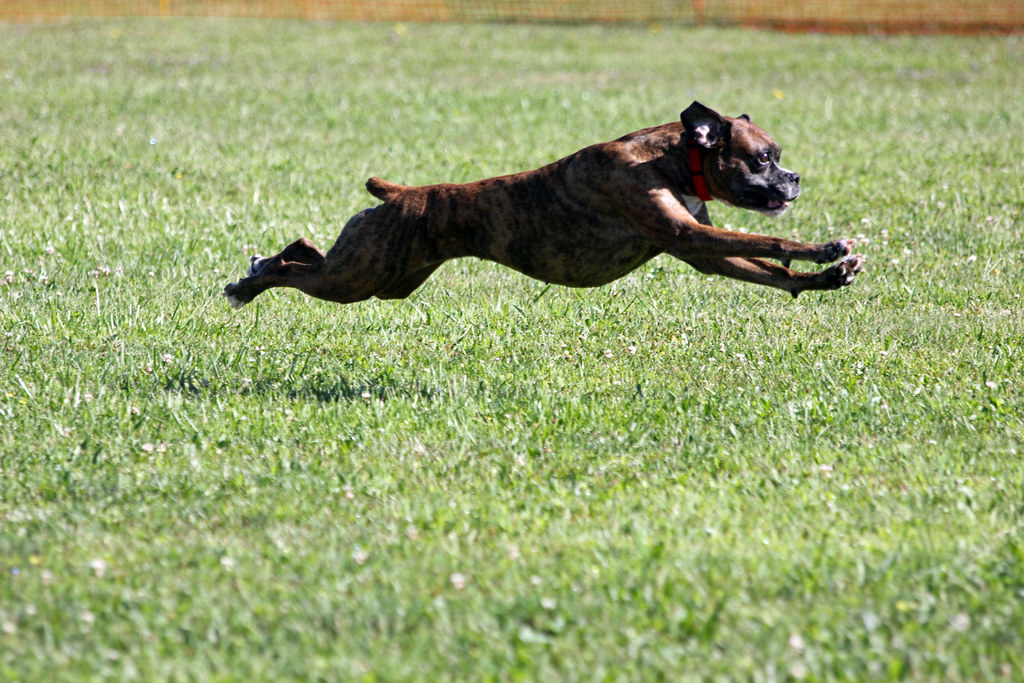 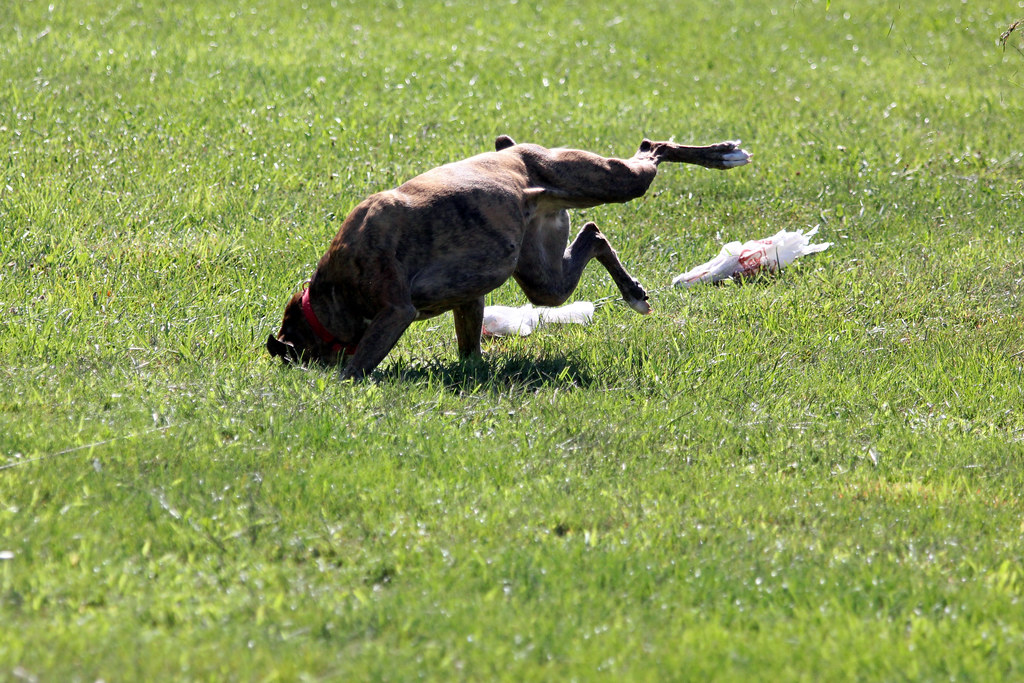 Before Molly's run I was told to get her warmed up.  Getting a dog fresh out of relaxing in her crate or car is not advisable, you need to get the muscles moving and the blood flowing first.   I trotted her around and let her flap around in the baby pool a little bit and then walked her over to the field.  I had discussed with Diane, the lady who owns the equipment, about how I was not sure if Molly would like this game or not.  She seemed genuinely amused and told me that she hasn't met a pitbull yet who isn't totally into lure coursing.

All thoughts of Molly only having a half ass interest in this game vanished the first time she saw the bags move.  Total screaming madness!   As soon as the bags jerked forward the line broke.   Molly alternated between panting and looking around to yapping and jumping.  Then it was SHOW TIME.   This video is Molly's first two runs stitched together.

SEE YA I HAVE A BAG TO CATCH! 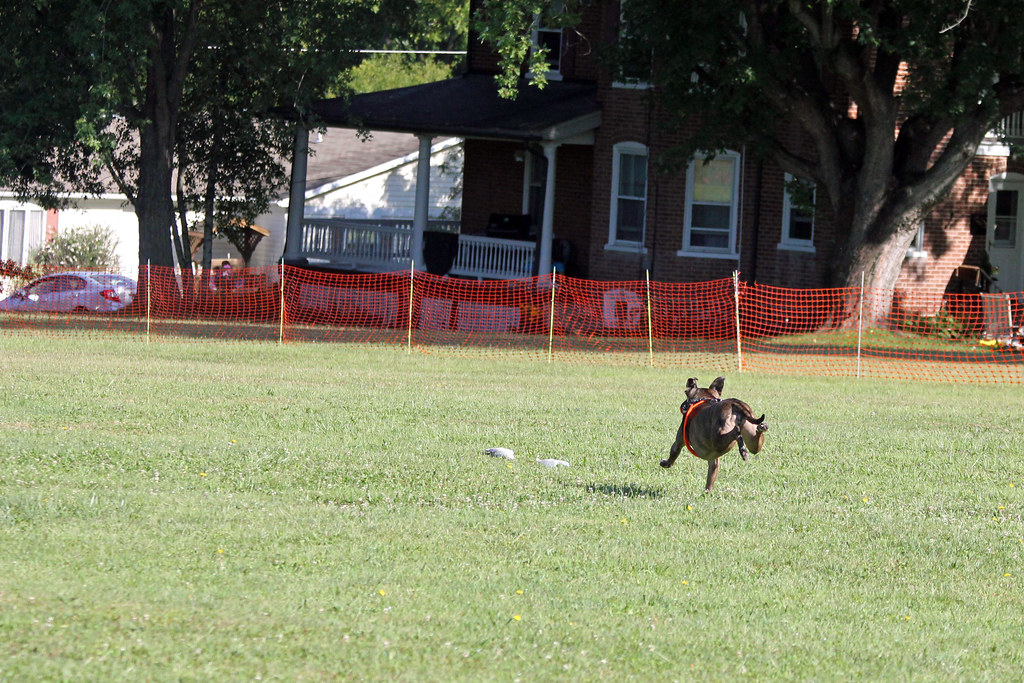 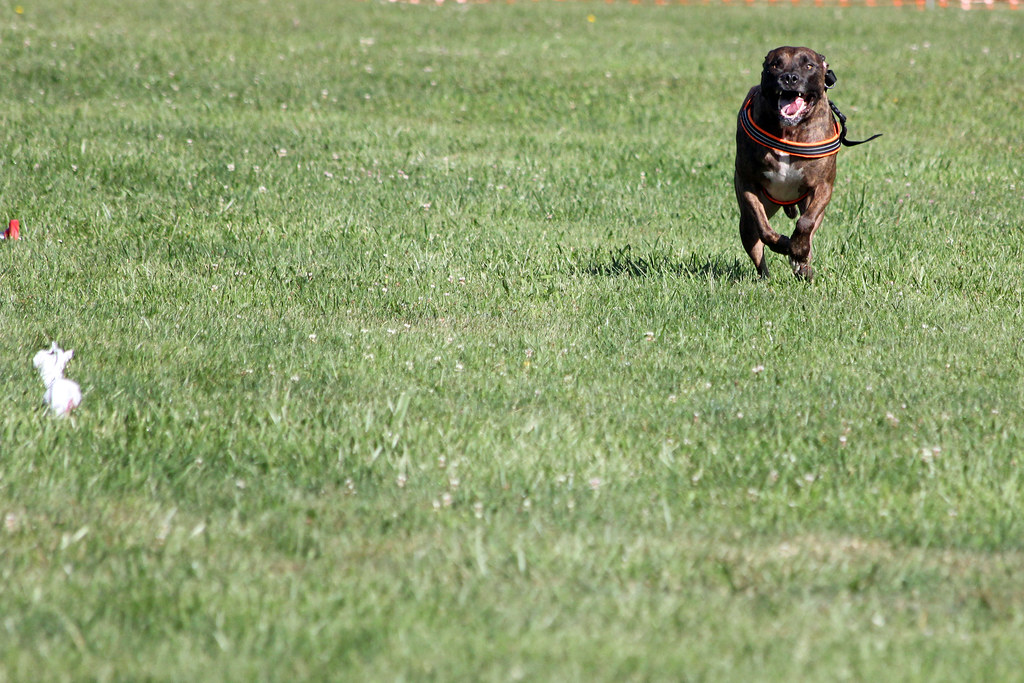 I really could not stop laughing at Molly's unbridled passion for this new game of chasing a plastic bag!  Just like that, she loves something as much as chasing her Ball.   I immediately bought her another run and prepared to enjoy Jennifer's dog Crookytail on his run!  And what enjoyment!  If Molly was frenzied about the lures Crooky was absolutely on another planet of ecstasy.  When the lures moved the first time he launched forward and took poor J straight off her feet!   It is hard not to enjoy a dog who is having so much fun! 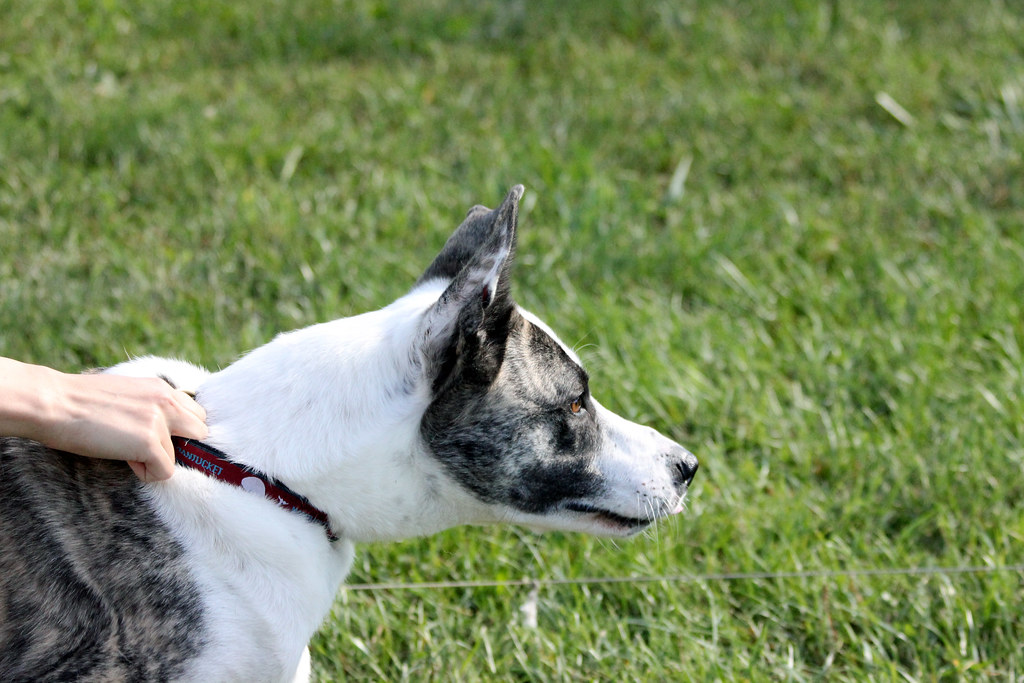 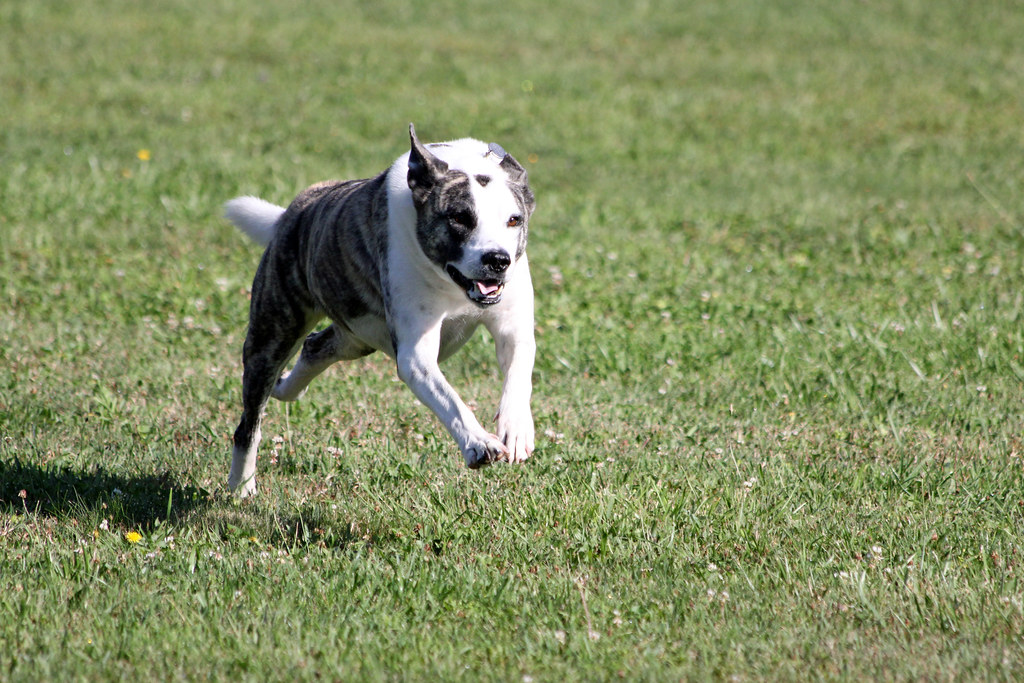 Taking Lure Coursing photos was quite a juggle for me.  My zoom lens is very low end and does not autofocus as quickly as some of the better products available.  Things are moving very fast.  And I want the dog and the lure in the photo, yet still want to get a good close up of the dog!   Practice practice!  Add to that that my memory card is completely worn out and was never high enough quality for this camera in the first place, so there is a delay in storage.  Ugh!   Shutterbug troubles.   I had a lot of fun nonetheless!

Perri was next!  The following video shows far better than I can explain in words that Perri finds lure coursing to be possibly interesting, but way too scary to take the risk of finding out.  When her legs touched the lure line and it moved! that was the end of the road.  Maybe I can train her interest by adding "running around with a plastic bag tied to a string" in my front yard to the list of bizarre activities that keep my neighbors certain that I have lost my mind.

Diane suggested bringing Perri into Molly's second run.  Sometimes that is all a dog needs to get over being afraid of the equipment is to run with a dog they are bonded with.   This seemed like it could work.  One of Perri's most favorite activities in the entire world is chasing Molly.   No Thank You.  This time Perri just stood on the sidelines and barked a little bit.  I clipped her leash on so that I could take more Molly photos and called it done.   The guy running the equipment told me to give it another try some day, that a lot of dogs that were previously afraid do grow to love it.  Since I will most certainly be doing this in the future more with Molly, I will probably give Perri another chance.  But I'm not getting my hopes up!

Now it was J's other dog's turn and Crooky had had enough of waiting - especially if his brother was going to be out and he was not!  He escaped from the car.  The windows got rolled up further.  We all heard an insistent car horn honking...it was Crooky!   We found him trying to slither his large body out of a crack that a 30 pound dog would be lucky to slip out of - so we transferred him to Dog Jail in my car where he could no longer see the coursing field and where there was also no chance of escape. 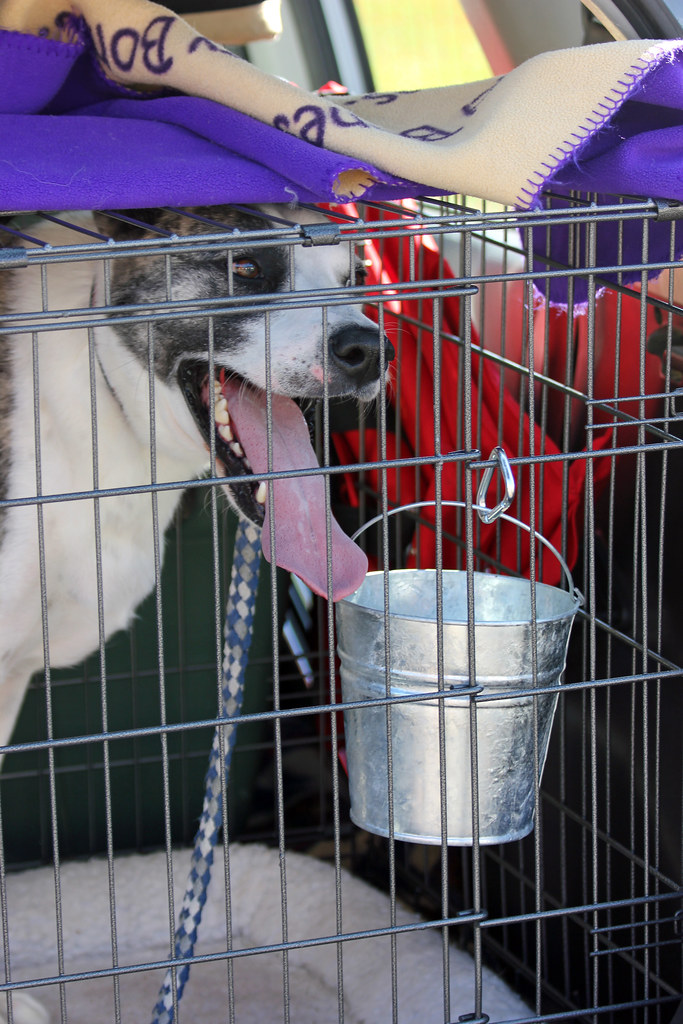 Of course I then had to buy my girl a third run!  She was very crazed now while waiting for her run and it only got worse as the day went on! 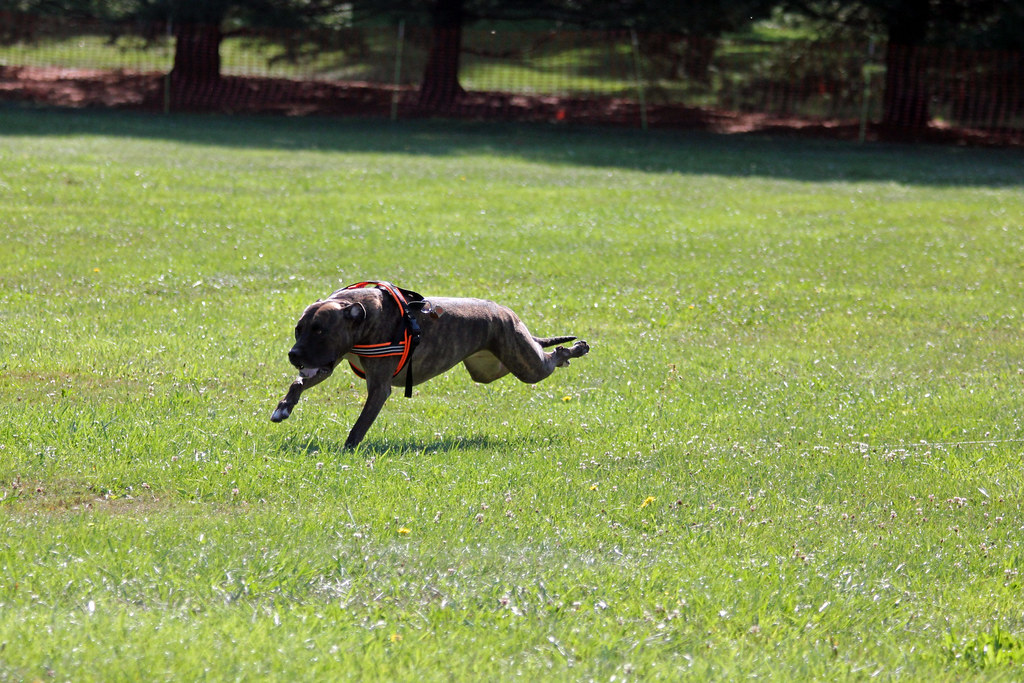 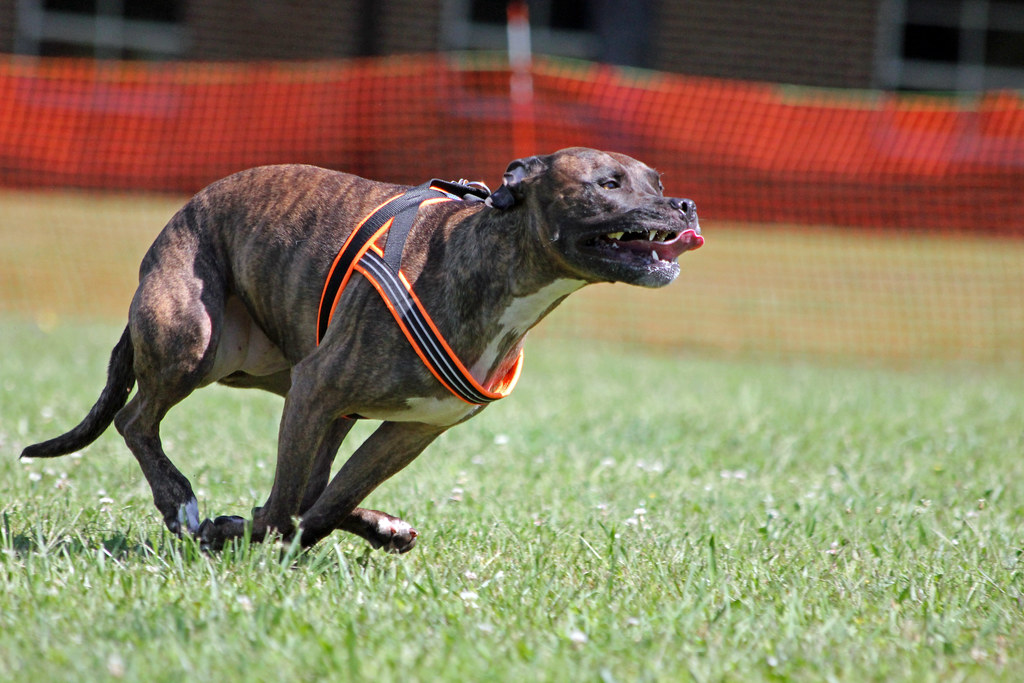 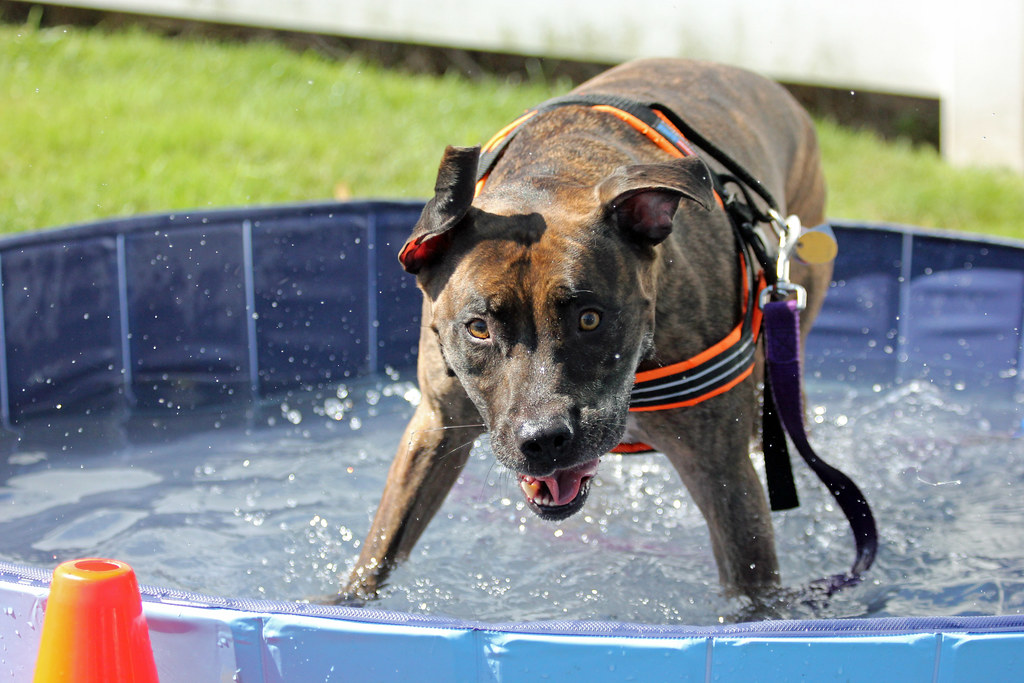 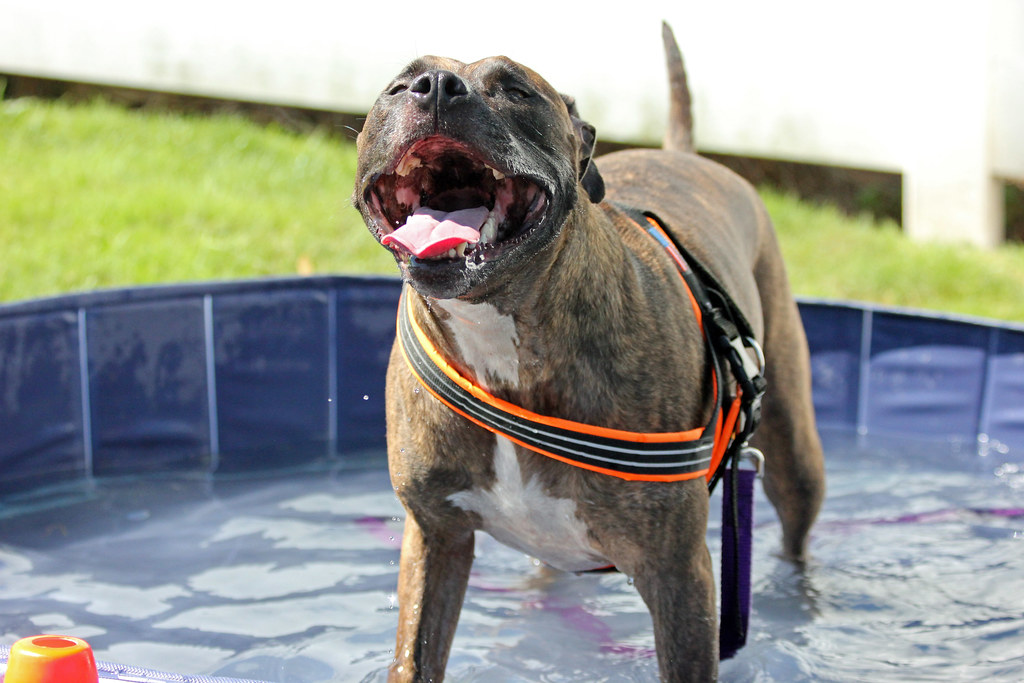 Posted by dogbird daily at 6:44 AM