The weekend started with a bang on Friday night - the local club was doing a CPE trial, so I entered Perri in Snooker 1 and Standard 2.  And since I worked so much at the July trial, with my worker coupons the runs were only four bucks each.   Nice!

Snooker 1 was first and it was not pretty.  I ran with her over the first jump and tried to push her over to the jump that began the 7-point combination obstacle (a jump and tunnel.)  She bobbled and stressed down.  That was asking too much at that moment in time.  I tried to recover it and we did something different entirely, the Aframe.  She perked up a little, but kept stealing worried glances at the crating area and trotting.  We cobbled together a 17 point opening and got the first obstacle of the closing before the buzzer sounded.  I was startled by it for a minute because it seemed so soon, and I was frazzled and trying to remember "What does the buzzer mean for this game?  Oh!  Go to the Table."   I ran towards it and left Perri behind in the dust, and that made her run, too.  I put her back in the car with a bucket of water and one of her favorite junk food Busy Bone chewies to relax.

So what to make of it?  Crating in the car was very new.  Being alone without Molly is difficult for her, but bringing Molly along just to make her sit in a crate for hours and emotionally support a poodle didn't seem fair.  I had also taken all of the dogs swimming for well over an hour a little while before the trial - was that too tiring?  Not likely for this two year old dog.  Perri has plenty of physical energy, but mental energy is another ordeal.

Standard 2 was next and had the weaves and the teeter.  I really didn't know what would happen, but I determined not to over worry.  I trained my dog to do these things, she would do them.  She would!  And she did.  Whatever Issue Perri was having earlier seemed to be nothing a little chill-out and chewbone couldn't fix and she was back to my good girl for her Standard run, 19 seconds under SCT and clean.  Can't ask for much more than that!

And speaking of agility, baby dog's first title certificates came in the mail!  Molly is teaching Perri to give the stink eye when asked to pose with foolish human made accomplishment props.  (These are Level 1 Handler and Standard titles.)  Molly's Level 4 Handler title certificate arrived also, but I may as well ask the Smokey the cat to pose with the certificate.  I might get more enthusiasm and cooperation. 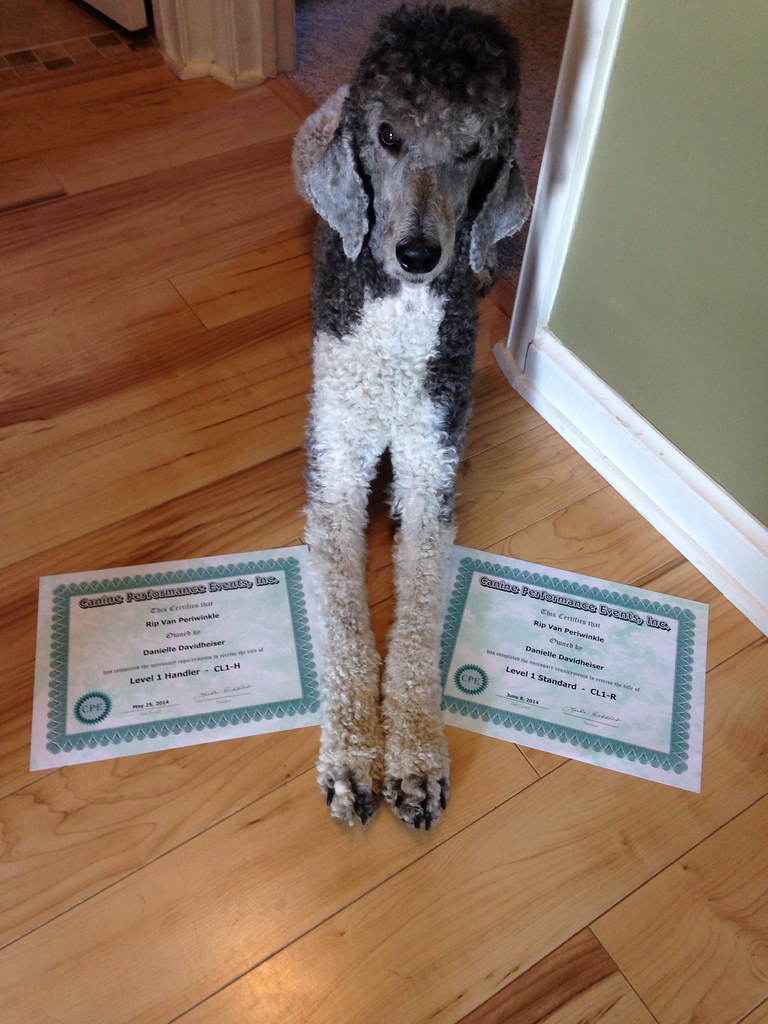 The next day Ein and Molly got their turn to play rally!  We made the long drive to Kellar's Canine Academy for a double trial.  Molly has not trialed outside of DTCCC since October 2012, so again... I was not sure how this would go.  Perri came along for the day, just to be at a trial and hang out and look pretty.   I brought our huge wire crate and I absolutely loved the set up.  Both girls had plenty of room and I could clip the water bucket on the side of it.  This seems like a totally simple thing - but it isn't.  Molly dumps her water all the time.  I cannot count the amount of times at trials or classes I have had to clean up a soggy mess of bedding, or air a crate out afterwards because of her doing this.  It makes me crazy.  This crate is heavy, so I wouldn't use it for a class each week, but I do believe it is going to be attending future agility trials.  I will tell you what, this four dollar bucket from Tractor Supply Co is one of my most favorite dog purchases of this year. 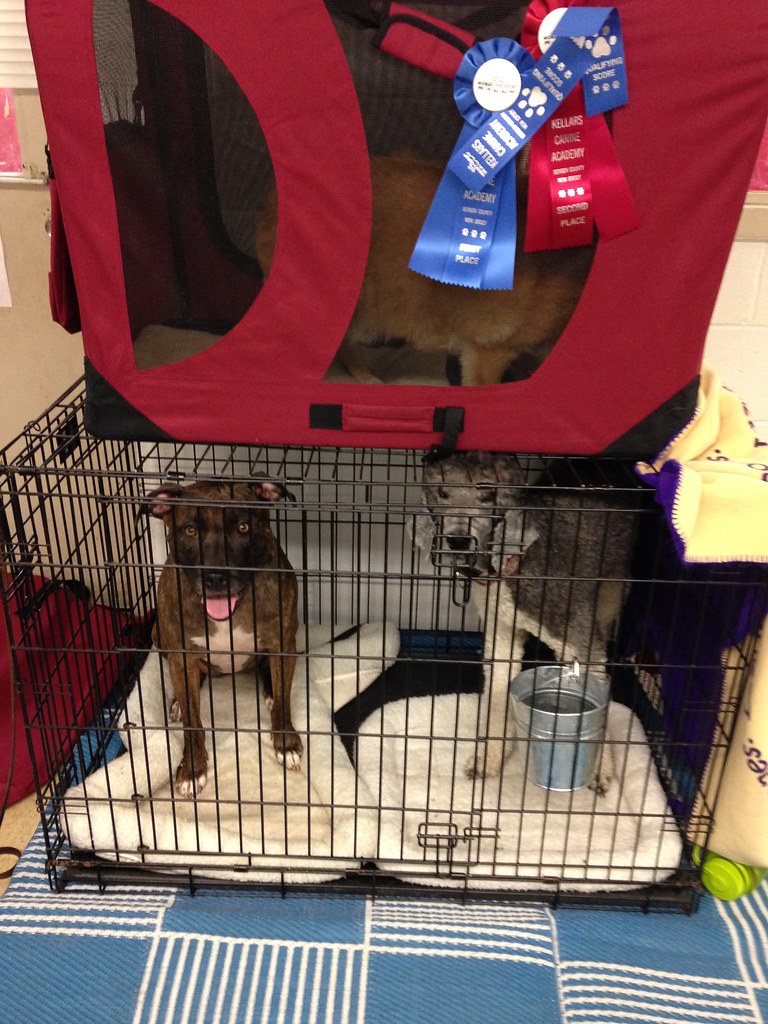 The trial was back to back Levels, so when Ein went first with his Veterans run, he did two of them in a row!  He was totally loving his time out there, especially in the first run.  We only lost one point (I think because he collapsed into a play bow and stretch instead of doing a proper down.) and got a first place in the B class with a 209.  The second run he did some lagging and was a little less enthusiastic, but still wonderful at a 207.  I noticed he had a hard time getting up out of his sits and the down on the second time around.  Poor bug.  I know I have said it before but I absolutely adore this Veterans class - it is beyond perfect for Ein.  We still get to play the game that we love, but with a lot less pressure and a lot less time in the ring at once.

Next was back to back Level 1 and that was Molly.  Her first course was her best, she was engaged and happy and never looked away from me.  I have no doubt her tail was wagging.  We got a 209 but no placement - the B class is very competitive!  Her second time through, Molly was not quite so engaged.  It was our lowest score of the day - but still completely respectable at 201.  Of course, our lowest score was the one I have on video.  Bah!


Level 2 was next.  I was a little nervous because if Molly was not engaged and out of enthusiasm with the leash on in Level 1, what would happen in Level 2?  A perfect 210 and second place, that is what happened!  There is nothing like, "And in second place with a 210, the PITBULL!"  I love to hear that.  Molly's second Level 2 run was the same, less engagement and enthusiasm for a 204.  Still, I am over the moon with my girl.  I wanted improvement from Molly's ring performance back in February, and I have it.  We don't come back to WCR until mid September - so we will see how things look then!  The ARCH title also requires you to earn 100 points.  You must earn 30 from Level 1B, 30 from Level 2B and 40 from either class.   With this trial Molly has earned 64 ARCH points - 30 in 1B and 34 in 2B.  This is a huge relief for me, since I had a most difficult time collecting all of Ein's 2B points!  That is not a put down on Ein - Molly is a confident dog, and I have become a more experienced and confident handler in the last year.  Molly is not the only one who is improved!   I am trying so hard to shed my shoulder turning habit and just walk, but for some reason this is difficult for me! 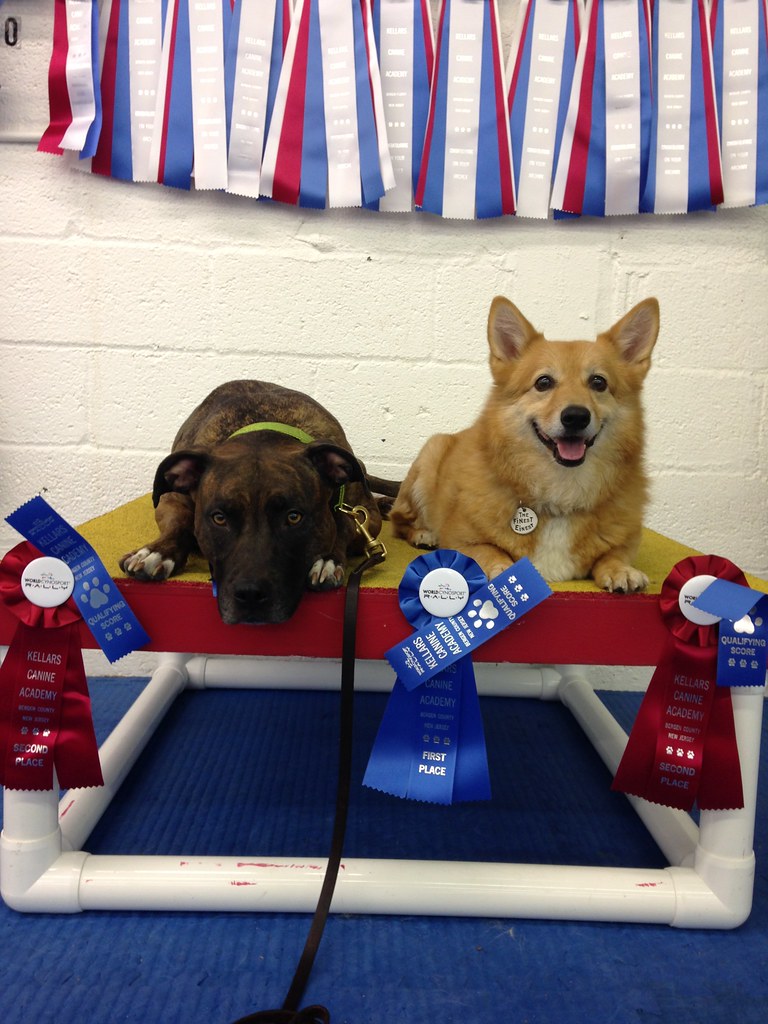 Molly still thinks that ribbon photos are completely boring and idiotic, though.

And now, no trials until September 1st!  This feels so strange to me, but I really need to take this time and work on Molly's problem areas.  I feel like we have not made much progress at all yet, and August is nearly halfway over!  2x2 training is going okay, but I am struggling with my lack of space and Molly's short attention span.  A friend suggested only doing one or two reps at a time and I think that is certainly what is best for Molly - but with my limited training time it is hard to limit myself to that.  We will see...we will see....
Posted by dogbird daily at 7:00 AM