Well we have had a weekends of good and bads for sure!

Jackpot was first with pick-your-own Gamble style as a non traditional.  I wanted to do them all but Molly slipped on the turf and played bowling balls with the first gamble jump and that killed it for us.  We did the other gamble instead and Q'd with 48 points.  I squeaked a teeter in at the end and we still came in under time, whew!

Standard was next, with many hair raising moments of avoiding off courses...a sloppy front cross that isn't pretty but is much improved from our previous Molly-totally-ignoring-me front crosses, slow weave poles .... and then a blown dog walk.  Oh well.  I will say this, I was surprised at Molly's smooth run down that Aframe.  Whatever, it is not like we need 9 Standard Q's or anything.... :)

Perri was next in Standard 2 with a slightly stressy but smooth Q.  I caught myself taking Perri's commitment for granted to a tunnel in the middle of the course as I would with Molly, tsk tsk!

Wildcard was probably my favorite run of the day.  I have to laugh at myself pulling her so hard off of that off course tunnel that she bypassed the tunnel altogether!   The weave entries had my heart singing, though.  They weren't fast, but they were there.  Especially the second time.  It is hard to tell on the video but I was behind her and she entered and kept moving forward.

We are going to get this weave stuff, we just need to work on generalizing locations. (I hope, I hope.)

I have no more videos!
Snooker with Molly was going beautifully until the closing.  I used the 2-Tunnel as my final color.  Instead of bringing her around to the proper entrance of the tunnel to start my closing, I resent her into the wrong end.  Agony!  I even lost myself and called her off of it, but it was too late.  She had her entire front end in, and it was wrong of me to call her off of it anyway.  She did just what I asked her to, and shame on me for asking her to doubt herself.

Perri's Snooker run was absolutely smoking with 44 points and nearly 10 seconds under the allowed course time.  I was so proud of her!  And that Snooker Q means that she finishes CPE Level 1!  Yay baby poo!

Last of the day was Jumpers with Molly.  I was proud of her for keeping her energy, it really made me feel great.   The temperatures were cooler, yes, but I also made an effort to warm her muscles up and cool them down after each run - as well as her "cookie stretches" for her neck.  This should be common sense for me but it is still something I am trying to integrate into my routine.  Jumpers was a Q with a nice time, only one run out at the end for my not decelerating to show her a sharp 90 degree turn into the last jump.

Sunday was our World Cynosport Rally trial, and Molly was a different dog.  When I fed everyone in the morning, Molly did not want or care about her food.  This is a "hell freezes over" event.  Molly almost always wants her food.  I considered just leaving her home for the rally trial and scratching her entries.  Instead I decided to take her, let her ride shotgun and take her for a little walk before the trial.  We took said walk, found a geocache and Molly threw up twice in the parking lot - thick bile and many of the treats I had given her the afternoon before.  Afterwards she seemed to perk up a little bit.  I decided that I would try Level 1 with her and if she wasn't into it, we would scratch Level 2.  She even ate her food and the piece of cheese I had thrown in to tempt her with.

The ring time was the worst she has ever been with horrifying lagging, dead stops, double commands and no concept of front position.  183.  I scratched Level 2.  Not only were we out of the running for an ARCH QQ, but I would see absolutely no benefit to putting her in the ring again.  She did not feel good, she was tired.  Trying to persuade her to enjoy the ring was absolutely not going to happen.  Who wants to play a game when they feel sick anyway?  I put her up in my car with the sun shade and some water and enjoyed the rest of the trial until Ein's Veterans runs.

Veterans class finished the first trial, and began the second one.  Ein was absolutely overjoyed to be in the ring with me.  He is certainly recovered from his tooth surgery!  As ever the slightest bit of lagging and a sniff in the second ring time, but we finished with a nice 207 and a 206 and another title for Ein: RLVX2 (Veterans Championship 2). 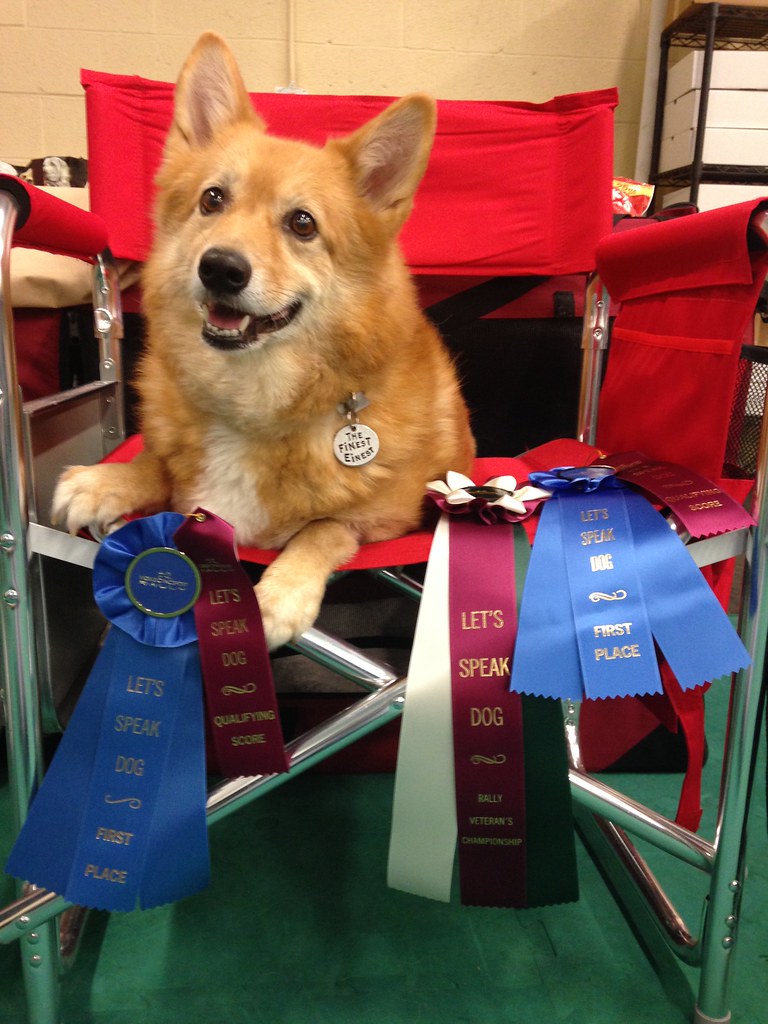 Today could have been an ARCH for Molly.  I am making the decision to not show her again in rally for a little while.  We clearly have more work to do on ring enthusiasm and her understanding of behaviors. (this is based on her behavior at both the August trial and the trial last Friday.)  My club's next show is in December, so perhaps we will aim for then.  Ein will fly solo at our next Rally trial in October and I am looking forwards to that!

As for Molly, she took a few small geocache walks with Ein and I on our way home and has been laying on the couch since.   She was not interested in her dinner tonight and that makes me feel really upset and anxious.  She did eat it eventually.  She was not interested in her Kong treat tonight.   I am hoping that a night's rest will help her feel better, and that maybe this is all due to something yucky that she ate on our visit to The Farm.  Worry, worry, worry.
Posted by dogbird daily at 7:49 PM