If I was going to have to scratch my girl Molly for a whole weekend of CPE Agility, I had the second best possible weekend to compensate!  I was allowed to have Perri fill in for all ten weekend runs and she qualified in every single one of them!  Not only did she qualify, but she ran clean.  We had one meltdown, on the first day but we recovered from it.  I am absolutely floored by the confidence progress this dog makes at each and every agility trial.  And I truly think the trials are helping the confidence, much like rally-o trials helped Ein's confidence.   Incredible.  Dogs are incredible. 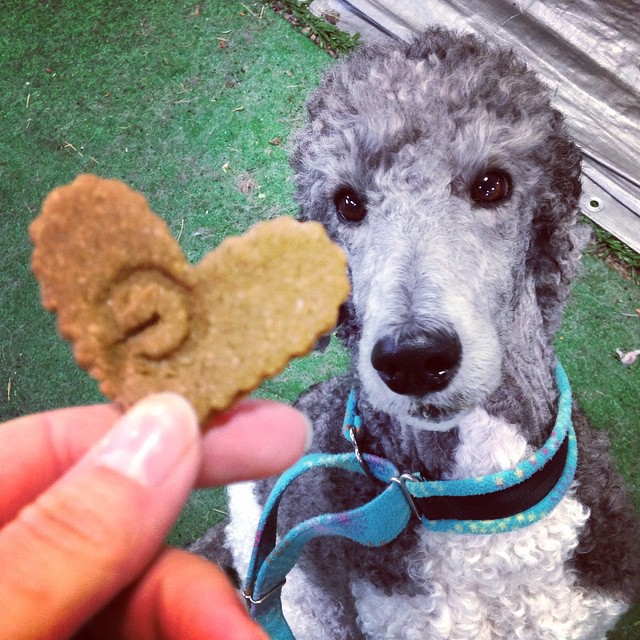 Day 1, Saturday
started with Fullhouse and I had a fast girl, eager to work!  We earned 44 points and needed 21.

Next was two rounds of Standard Level 2, back to back.  I was a little worried about that, because Perri often fizzles down to a slow crawl in class if we do too many runs one after the other.  I did not need to worry, we qualified in both runs and earned our Level 2 Standard !


Following that we did Wildcard Level 2 and this was our meltdown.  And I am very fortunate indeed that we even qualified.  When the ring crew was setting the bars to 24", I had Perri pretty engaged with me coming into the ring and on the start line.  But it was taking forever.  And Perri looked behind her and saw something in the corner of the ring that terrified her.  She was obsessed with it, I could not get her back.  She couldn't stop looking at it.  If I could go back I would have walked her over to it and let her sniff it and be done, but I was instead trying my best to reengage her.  You can see in the beginning of the video that she is still a mess about it.  I left her in a start line stay hoping it would focus her on me (I have no idea why I thought that might work) but she used that opportunity to go check out what was bothering her.  When I returned to her to try to get her to run with me, she took off and I was way too far behind to set the line I had been planning on.  Perri took both Wildcards that I did not plan for her to take, and my mind was blank.  I sent her to the final, wrong,  Wildcard.  But...she did not take it.  She also did not take the following obstacle.  My brain started working again and I heard the judge's voice in my head "1....2...." so I had Perri take the final "A" obstacle and finished the course.  My dog saved my butt big time.  Can martian poodles read minds?  Or course maps and the rules of Wildcard?  Probably.


Jumpers was last and was totally smooth, Perri was running nicely again even though we started from the same spooky corner.  I chickened out on doing a front cross that I should have and it messed us both up, just in the sense of ruining our flow completely - we still qualified clean.  I absolutely must stop being afraid to do front crosses.  It is ridiculous, I know it, but I still have an impossible time trusting my dog to continue taking the prior jump while I execute the cross.

But regardless of me persecuting myself on my handling, we had an absolutely splendid day and it was great confidence building for both Perri and myself.  We had a special treat of seeing our most charming friend Foomin and her momma at the trial this weekend - they even brought wine.  NOM. 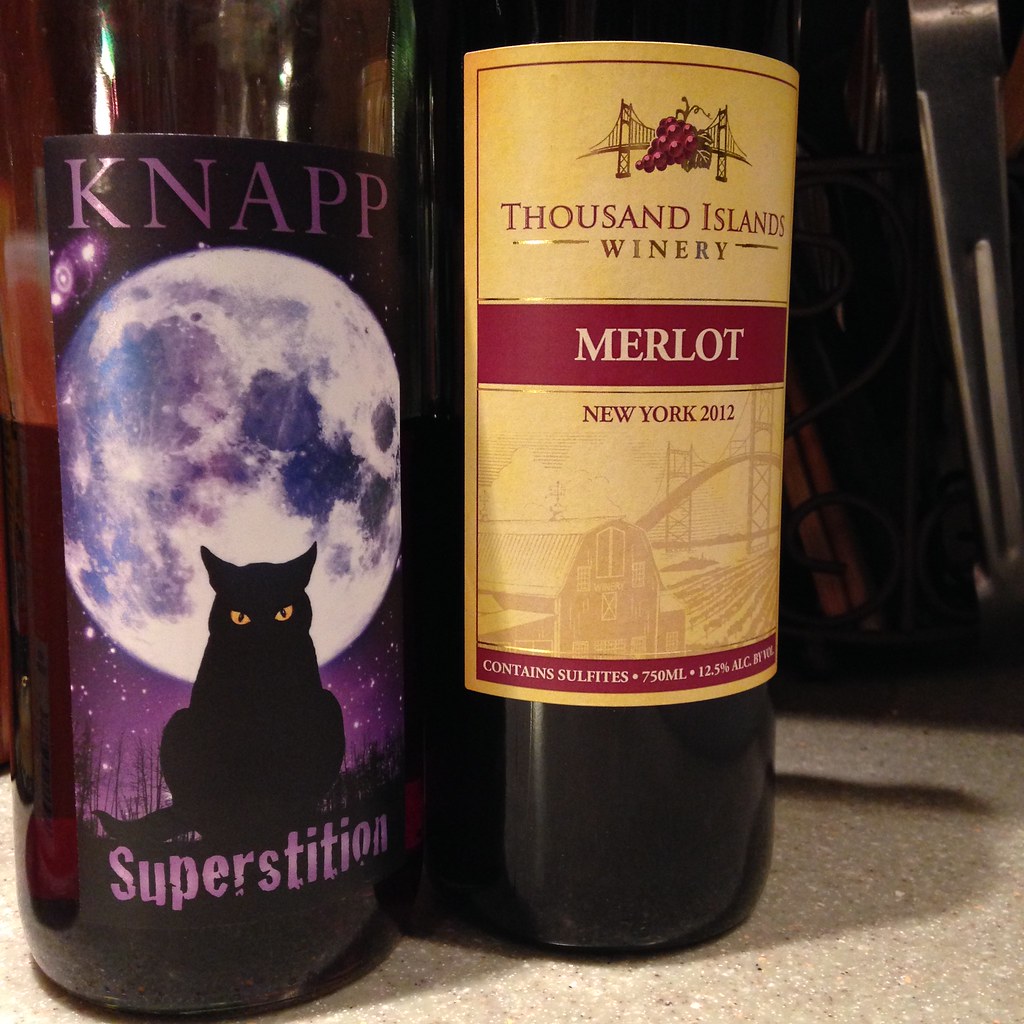 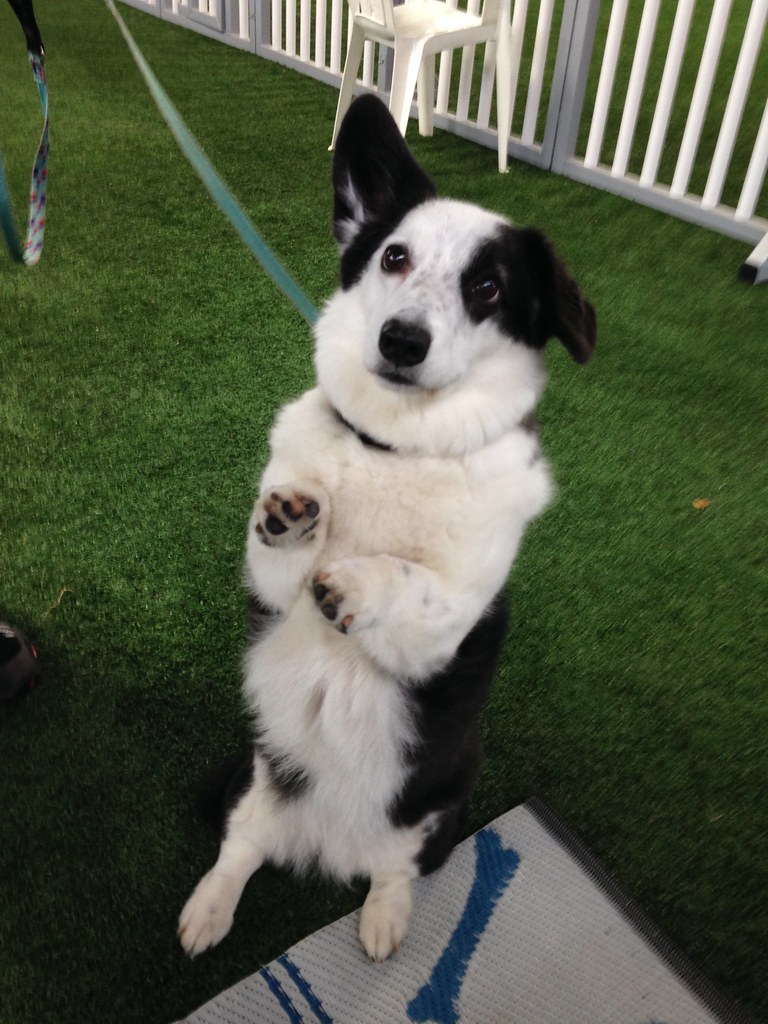 The sunset and weather in the evening were gorgeous.  Even more gorgeous is that the trial finished before dark! 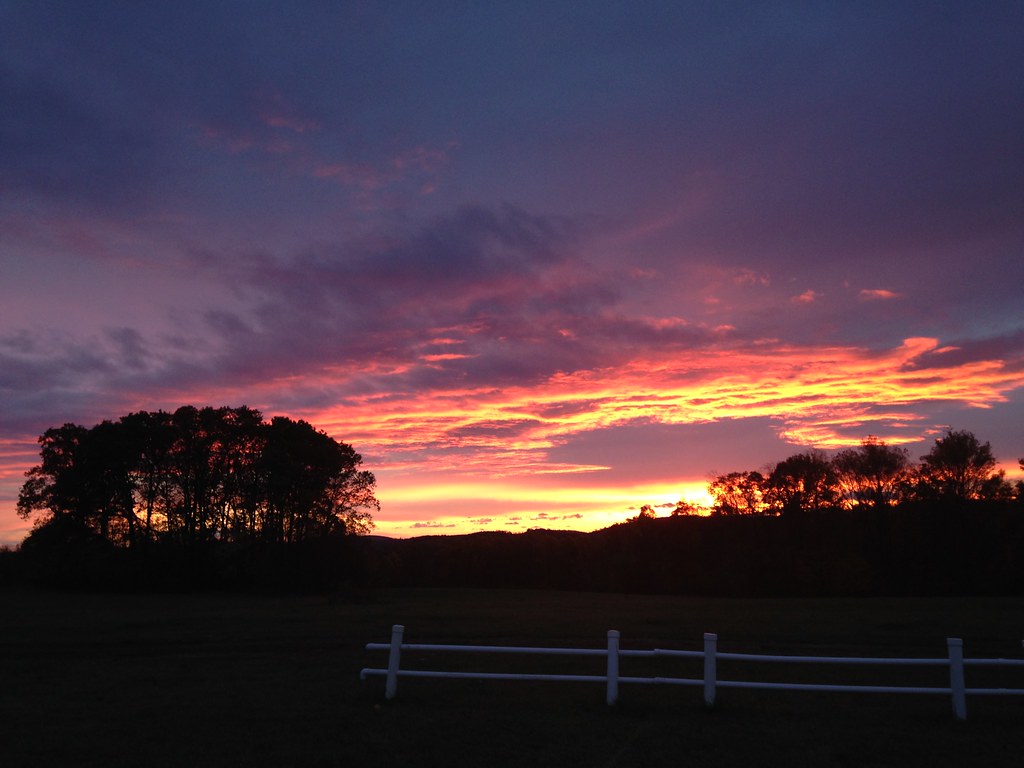 Day 2, Sunday
started out with Jumpers Level 2.  This time Perri became completely agitated by a pointer dog with the zoomies ahead of her.  She was barking and really fired up!  I put her in another start line stay hoping that it would bring her down a little and focus her on me... Again, no.  She ran around that inconvenient jump that was in between us to get to me!  And then I chickend out of a front cross.  Again.  And it totally stuttered our flow, absolutely awful!  Ugh.   So frustrated with myself.  But!  We qualified so that means we get to play in Big Dog Jumpers at our next trial, Level 3.

Colors Level 2 was next.  We actually have not played Colors since Perri's very first trial in May.  The course was a pretty simple straight line with only one cross needed.  The fastest dog ran it in 11 seconds, wow!

Wildcard Level 3 was next, big dog Wildcard!  I ran her out the first two obstacles and then forced myself to do a front cross.  It worked!  We did not die, we did not crash into each other, Perri did not drop the bars of the obstacle prior to my crossing.  My goodness!  A clean , first ever Level 3 Q.


Perri was getting pretty tired by this point.  Her run was nice in Wildcard but I could tell she was reaching the end of her limit, we were at eight runs at this point and that is a lot for a dog who has never done more than four for an entire trial.  It is a lot of mental stamina and I am still so protective of Perri.  I felt guilty even going for ten runs in one weekend in the first place.  I took Perri out to the sheep pen and made a stupid fool of myself chasing leaves, running from Perri and human-pouncing towards her.  Perri appreciated it and was grabbing leaves and zooming around and butt tucking and pouncing and just blowing off steam and having a blast.  I let her rest in the car for the Wildcard 12 and Standard 45C round so that she would have a break from the trial noise.  I did this a lot over the weekend for Perri.  If I knew that it would be a long time in between runs for her, I put her in the car.  The trial and all of its barking, and beeping and judge calls...all that noise really adds up and makes a dog very tired - especially a fairly green dog like Perri.

It was not long before it was time for Standard Level 3.  It was combined with the Level 2 group, so it was not a true Level 3 course, but still - we got Level 3 credit!  Perri was tired, she was slow coming down the Aframe and the Teeter, but she was a good girl and did not refuse anything or meltdown and she ran as hard and fast as she could.  I even made myself do not one, not two but three blind crosses after jumps and put total trust in Perri that she would follow me insead of running the jump out.  She did!

The final run of the day was Jackpot, All Level.  It was Non Traditional with two squares in the center of the ring, one inside of the other, with three tunnels in the outer square.  You could send the dog to all three tunnels from the outer square for 15 points, or the inner for 20 points or...both.  I opted for doing some obstacles outside of both squares, then we moved into the first square and did the 15-point "gamble".  I got all bold and thought I would try some tunnels sends from the inner square but Perri was not having that, so we just went to the table with our 52 points and "called it a day."  That'll do! 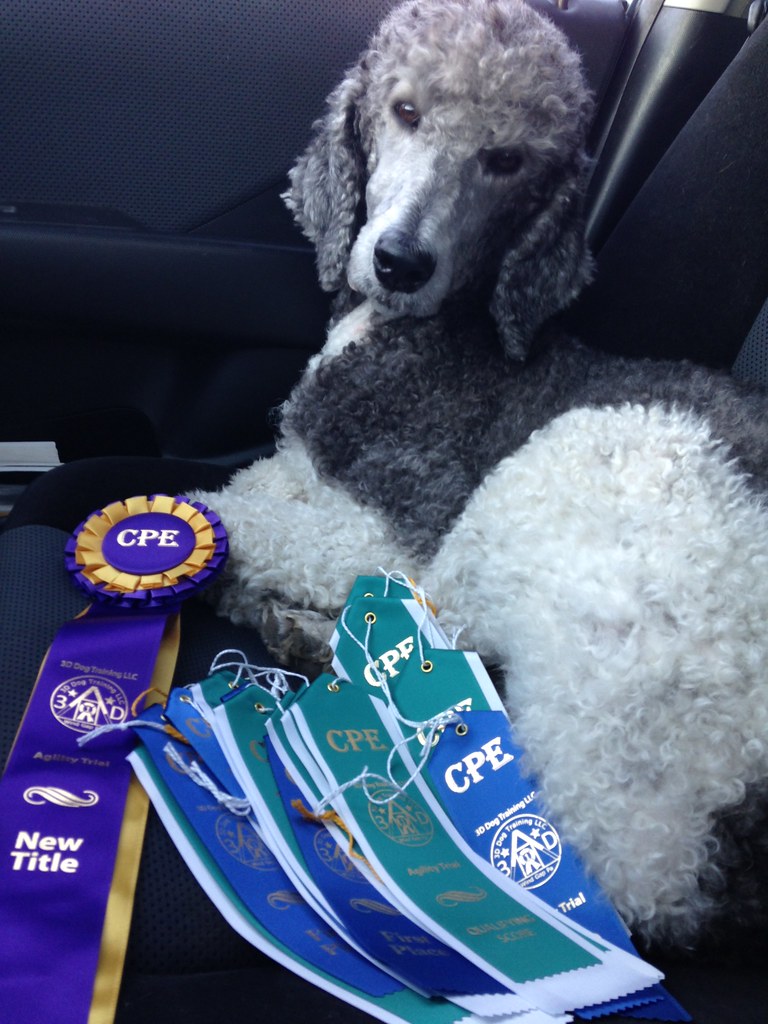 I am so proud of this dog.  So proud.  And I am proud of myself for not giving up on her.  Well, how could I?  I cannot express enough how devastated I have felt so many times about Perri and her shut downs, her staring, her tremendous talent hidden behind her fears.  When I entered her in that trial in May I never expected her to actually like it, it was just another thing I thought might help her to feel more confident.  It worked.  Everything we are doing is working, one day at a time.  I am so amazed by this dog.

And when I got home, I wanted to try for a better ribbon photo.  Ein stood on the ribbons, he sat on the ribbons, and then he just flopped onto his back on the ribbons.  Enough attention given to this filthy poodle, don't forget Number 1! 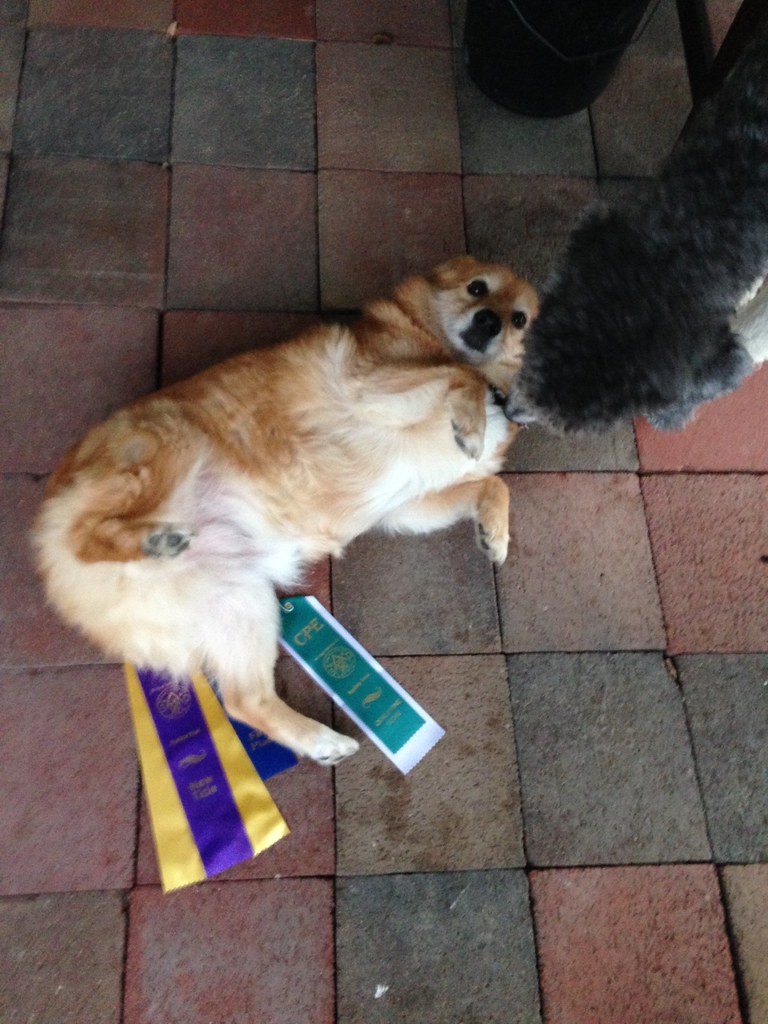 Posted by dogbird daily at 6:11 PM