Today was a long. long. long. day.  At the local agility center, one club was hosting a UKI trial in the day time, and CPE in the evening (as well as all weekend - we will be there Sunday also.)  I entered Molly in Agility and Jumping since I wanted the opportunity to do a training run with her.  My goals were to reward weave performance and have them be a good experience for her.

Agility went well, we are still in Beginners in UKI so we got to do the easier course but it was still a challenge for me!  The beginning was a serpentine that required some front crosses and I actually pulled everything off perfectly and Molly was not left in any confusion - it was very smooth!  I tried to remember to do my transitions more smoothly with my hands.  We did a great running Aframe - me running flat out went perfectly once again.  From there we did two more jumps to the weaves.  Molly had no idea that I had a toy.  She entered them but she was slow and was stepping over herself.  I rewarded her with a wubba and of course she came alive!  I asked her to do them again and she did, but she popped when she saw me moving to deliver her toy.  I was glad to see this, it is something that she does when she is in any environment other than home, so it was good to work with that.  She did some beautiful weaves the last time and we did some tugging and her tail was wagging.  She did not want to let her toy go!  I usually flat out shameless bribe her with a treat to do a release but all I had was...."Molly wanna do a tunnel?" I was very surprised that she let it go and slammed into the tunnel!  I barely caught up to her on the dog walk, told her she was a good girl, and she hit the contact zone.  Very happy with our toy run! 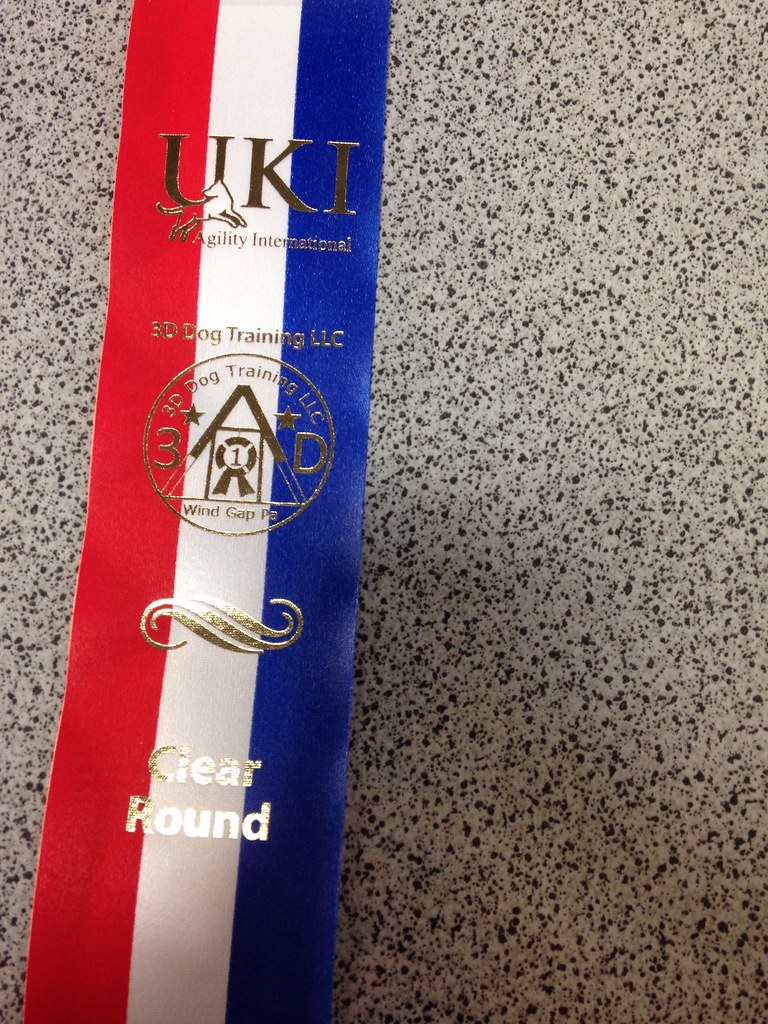 In between there was a long afternoon of working every single class, doing multiple jobs at one time.  It was exhausting.  I am not going to fly into a rant about my feelings on agility trial working (I wrote a blog post on the subject that states my feelings in a much more diplomatic way than I am feeling right now, "Working Like a Dog")  What I will say is that I have never seen a group of competitors who refused to work as steadfastly as this group did.

We finally got to run Jumping and Molly's weaves were slow.  She did do her entry.  We ran the course very nice.  I did a very late front cross because I forgot that I wanted to do it and it stressed her out and I saw her eyes light up and she tried to bolt for an off course tunnel.  I called her to me and we finished the course with one second to spare under time.  Clean Round!  I am still so stung by our "slowness" and how difficult UKI Agility is for us, so it really meant a lot to get a qualifying round with Molly today.

I drove home, ate some lunch (at 3pm.) and relaxed a little.  Then I drove back to the trial site (armed with salted caramel hot chocolate!) for the evening's CPE trial.  I had only entered Perri for the evening.  What a night we had!

We did Snooker first and Perri and I flew through the opening but in the closing she ran off a spread jump and did a total tunnel suck and we did not get enough points to qualify.  In Wildcard, two of the discriminations were weave poles vs. straight tunnels.  (The other was Aframe vs tunnel, we nailed that one with no obsessive managing.)   The first time Perri did not read my deceleration and put a paw in the tunnel. (I wanted the weaves.)  I looked at the judge, remembered that "duh, she can't help me and Perri put a paw in so that sucks." and then on the final discrimination, Perri read my deceleration...entered the weaves but when she saw the tunnel she left the weaves and put her nose into the tunnel!  That is not a fault but by now we were running precious short on time.  I put Perri back in the weaves and she was now feeling a little sad.  We were 7 seconds overtime.  She perked up when I praised her and flew through the 24" tire with wagging tail and I apologized to her for my Q Brain!

But the cool things?  My dog who was afraid of tunnels was actually tunnel sucking tonight.  Somebody complimented me on how improved her confidence was in the ring.  That compliment meant the world to me.  And both runs, Perri did a start line stay!  This is huge.  That stay is a big help to me, but when I would put Perri into a sit and leave her, she would disconnect from me and refuse to budge.  I tried a stand-stay both runs tonight and it worked beautifully.  That alone made my night!

And in non-agility news, when we got home Perri still had plenty of energy so I tried something I hadn't done before.  I put the dumbbell on the ground and stood up.  Perri and I have worked on pick ups with  me sitting and she has been progressing nicely.  Moving to me in a standing position was quite a jump.  And tonight she hesitated on each pick up, but she picked it up and did a hold and never one time did she drop the DB before I released her.  Who is this dog?!  I will be working in a sitting positing on clicking faster responses to the pick up, I do not want that hesitation to become part of the picture for her, but I am very proud of her.  Very proud indeed!
Posted by dogbird daily at 6:04 PM