Matches: Hard Learning (This is a Long One!)

WARNING: This is really long and journal entry-ish and this is after I let my emotions calm down about the whole day.  But it is here because I am keeping a record of what we do and how our journey is progressing and I think someday I will appreciate looking back on this.
So, unless you want to see a girl whine about her inexperience and her poor poodle, may want to visit some other blog!

The plan on Saturday was:

Go to an Obedience match.  Perri does two ring time's worth of Novice, separated by roughly an hour.  Ein does Rally Advanced.

Then Ein and Molly got into a little fight over an ice cream bowl and while Ein is fine now, he was drooling and sore in the morning.  I could not and still could not find any wounds externally or in his mouth or gums and I have to wonder if he bit his own tongue.   Still keeping an eye on him and rinsing his mouth daily, but he is eating normally and chewing his bones and does not seem uncomfortable anymore.

So now in the middle of my two neatly planned Novice entries, I had a RA entry.  And I should have scratched it.  But I thought, "Why not?"

The environment was way over our heads.  It was at the K9Jym, where we played agility last weekend.  There were four rings in that space with the walkways standing room only, lined with crates and people and dogs and lots of all of those things.  I felt claustrophobic and irritable and I can't imagine what my space sensitive strange-dog-fearful Perri felt like.

We started with a round of Stays, because of time conflicts with my rally ring time.  The Rally ring was adjacent to the Novice ring and the stays line was made with the dogs' backs to the Rally ring.  The handler was very talkative, the dog not having the most cooperative time so there was lots of "Down!  No DOWN!" and a lot of erratic movement from the dog.   The entire stay time.   And Perri didn't move a paw.  Very proud of her.  If Perri is consistent in anything with Obedience, it is her group stays.

Our first ring time I am proud of: we worked on offered focus and engagement while waiting our turn.  We worked on ring entrances.  We worked on playing in the ring and Perri did a bang up job of that.  You would have thought we were in our own back yard with how well she was playing with me and how engaged she was.  I would ask for a toy release and then ask for heeling and it was all quite pretty.   We did a formal heel pattern with the judge and it was wonderful.  We worked on the F8, heeling past the first post and not sniffing his butt.  Another success!   We did one formal loop around the F8 to follow, gorgeous.   We left with a minute of ring time to spare and I felt great about it.

Then I had to do what I don't like: hurry.   I had to put Perri in her crate, rush back to the rally ring.  Do my walk through.  And we had to be the first dog in.  And here's where my painful lessons learning started: that was too fast for Perri.  She even had more turn over time last weekend when we had to repeat that Jackpot run (and I knew she needed it!) - and that was agility, which she is most certainly more relaxed with.  And it did not help that we had to walk through the entire crowded room all the way to the back past countless large dogs with the end of it walking through a group of four large black dogs on either side of her.  That is the stuff of nightmares for Perri.  She shut down very badly in the rally ring.  I had no dog, I had no engagement.  And I just wanted to leave.   (I will say she still did a beautiful kick back stand and I heard someone say "pretty!" ring side.  So, there was that.  Ha.)
The stewards told me to try some cookie throws and use up my ring time.  And I did that and we did some fun stuff on the 16" rally jump but Perri was just going through the motions.  I should be and I am grateful that she did at least that.  There was a time when she would have shut down on food or any sort of play.  There was a time when she was afraid of a jump, in fact.  Now it was the most relaxing and stress free thing for her.

I carried her back to her crate, I just couldn't walk her through all those dogs and people.  I couldn't make her bump into them and let them sniff her butt when she was feeling so uncomfortable.

We had a half hour before our next Novice ring time and I wasn't sure how that was going to go.  I was torn with indecision: what is the Right Choice here?  Go home or go in there and try for a positive experience.   We did go in, and unfortunately I tried for a formal run through.   Sigh.   The wrong decision, I always make the wrong one.  (Like why on earth wouldn't I just try to repeat what I had done earlier?  Live and Learn.)

And just when we went in the environment rose to a high volume clanging of scent articles and a handler who clapped loudly at intervals of about 30 seconds and someone else was using a clicker.  Too much for a fried dog and handler.  And Perri worked so hard.  Her heel on lead we had some disengagements but she really was trying to stay with me.  The Figure 8 there was no butt sniffing but there was lagging due to environment staring.  It broke my heart when she would look back at me and rush back to heel position: she knows where to be, she wants to be there.  But she just couldn't do it.   Maybe I'm giving a dog too much credit, but I know my girl.  She wants to be right and she really is a hard worker, she just gets overwhelmed too fast.
The SFE was beautiful.  The heel free we fell apart.  I had told the judge that we were feeling very delicate before we went in, so when Perri shut down again I told her that I wanted to leave.  The judge was very nice, and she loves poodles and she said "Why don't you try some cookie throws and why don't you try some short heeling if you can get her into that with releases to cookie throws...."
It worked.  Then we did a few steps of heeling into an about turn and cookie throws.  And I had my dog back!  We finished with the recall: Perri as still as a statue in her stay.  No anticipation twitches, not a muscle moved.  The judge said verbally to "Call Your Dog" and still she stayed.  I waited a few beats and called her and she exploded towards me and she was relaxed and full of joy (versus "Oh god let me get back to you I'm going to die!").  I met her with personal play and cookies and finally made a good decision: no formal front or finish!   She had worked hard enough.
I am so grateful for the judge who gave me the strength to continue our ring time and make it a positive experience for Perri.  I shut down just as much as my dog did and it was nice to have some support, it truly was.   I have so much to learn.  So very, very much.

I did not leave feeling great.  I left feeling never in my life so close to quitting Obedience.  Perri and I were going to try Novice again.  At the Poodle Training Club of New York trial next month.  I almost e-mailed the trial secretary right from the K9Jym Parking lot to scratch those entries.  But I made myself think on it.  Give it 24 hours.

I still scratched the entries.  I scratched them because I know we are getting close.  We just aren't there yet.  Denise Fenzi's wonderful blog article, The Miracle Method, came to mind.  And if I am totally honest, going to that April obedience show would be classic Miracle Method behavior.  And I won't do it.  I swore I would not do it again.

Perri was able to do a whole lot of things at that match (a busier atmosphere than we have ever worked before) than she was ever able to do before.  Recover from multiple shut downs, play with true relaxation, hold four minutes worth of stays with a large dog working behind her back in another ring.  But she is still so delicate.  And so am I!  The minute things started to get hairy I got stressed out and started turning into Perri and slowing her heeling down even more.  I shut down just like my dog.  We both need more work, more polishing, more confidence.  Agility is helping us.  More matches will help us.  And you better believe our next match I will be going in with a Perri-friendly plan that I will not deviate from!

We know the behaviors.  But the environmental acclimation is something we are sorely lacking in.  We need to get to Home Depots, Petsmarts and we need to take the formality out of this stuff and just work on play and short short spurts of work when Perri asks for it.  Hell, we need to probably work on just eating cookies and hanging out in those types of places.  We can do this, it's just going to take time.  I saw a thread on Facebook where looking away in heeling was the subject and one sentence stuck in my mind that Denise actually said.  "And most dogs do outgrow their need to look at stuff as they grow into their work."   That meant a lot to me and since I do not think Perri's issue is one of true intense fear but more one of "low confidence and concern/worry", I firmly believe that Perri will grow into her work.  She has already begun to.  She just needs me to make good choices for her.  And I just need to learn how to. 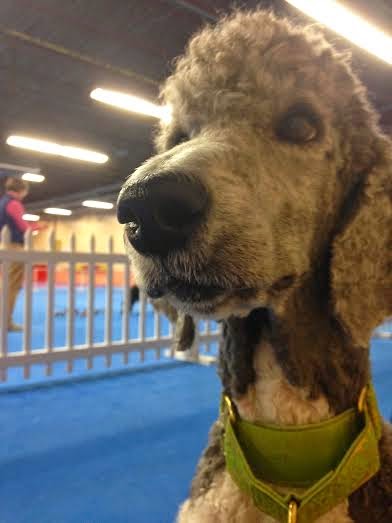 Posted by dogbird daily at 5:47 AM

Email ThisBlogThis!Share to TwitterShare to FacebookShare to Pinterest
Labels: it's all about the journey, matches, obedience, perri