Today was the day I had planned for Perri to see the sports medicine vet, but we were able to cancel that appointment since she was evaluated on Sunday!   Since I had the day off of work we were able to have some fun instead.

The first thing that we did was to make the drive out to a club offering open agility practice with choice of three footing surfaces.  They had four different courses/rings set up with choice of matting, dirt/felt/fiber and normally an outdoor ring is set up too.  They had the "I" exercise of the alphabet drills set up on the matting as well as all contacts in a separate ring as well to work on contacts.  What a class act!

I worked Molly on a short jumpers course on the dirt footing and then took her over to the ring on the matting to practice her contacts.  Molly's new stopped dogwalk is becoming a fake running dogwalk and I don't want that to keep sliding back into a run and leap dog walk!  It was nice to be able to practice it in two different rings all in one place!  (I don't know if true running contacts are ever going to happen for Molly and I - my yard is very small and I am very discouraged by this.)  Anyway!

Perri was next and we went straight out to the dirt footing.   When I took Perri's harness off she started the typical clown thing that she does on dirt footing - a spin and pounce and staring at me with laughter in her eyes to see what I will do.  I ignored it and we did just a few obstacles in a simple straight line, no handling challenges, just getting her on the equipment on the dirt.  We moved right into the weave poles and she did a really really good job on them but she did skip out at one of the last poles, either 9th or 10th.  I pretended that it didn't even happen and looped around on the course as though we were just continuing right along.   The second round through the weave poles all 12 weaves were done and with speed!   That felt good!  We sat and watched a friend's dog work while Perri caught her breath and she was very relaxed.   We did the Jumpers course that Molly and I had done and then I let her go back out to the car and relax.

I brought Molly back out and ran the Standard course.  It was pretty straight forward but with a few challenges.  Molly was really steady and running nicely today.  She was showing some of the stress over the weaves that she has at trials (being slow), so it was nice to work her through that.   I also did the Standard course with Perri.  The weave poles were not the roaring success that they were earlier but through rewarding her popping out and acting like she had done a wonderful job no matter what, she built up to doing 12 weave poles and earning herself a major ham jackpot.   It's just going to take time with Perri.  I need to control myself at trials - there will be no resetting of the weaves.  Maybe some day, but for now Perri needs me to pretend it did not happen if she pops out.  I do plan to return to our chiropractor within the next two weeks for a readjustment.  I am feeling very paranoid about Perri right now.

I left feeling really great about both of the girls' performance!  A little troubled about Perri's weave poles but the bottom line is that I need to stop thinking so much about them, relaxing and being supportive of Perri will get us back to a good place.

We made a stop at Lake Towhee Park on the way home to try to "avenge" a multicache that I had tried to find there years ago, but did not understand multicaches.   That was a bust, I couldn't find the first stage hide even though I had found it a few years ago, but the girls got to enjoy a swim! 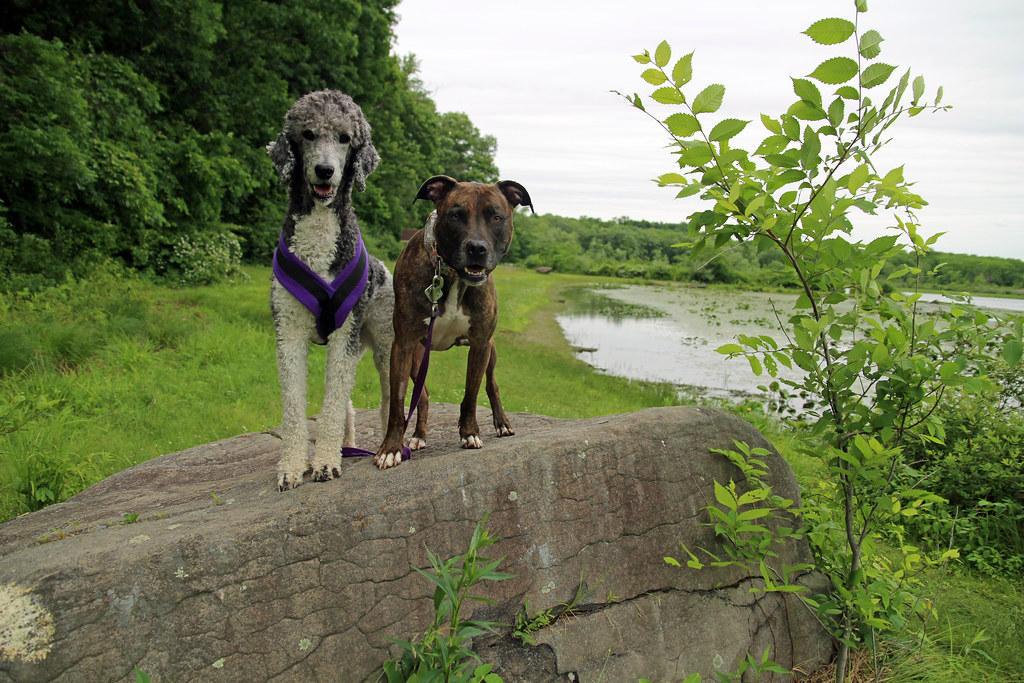 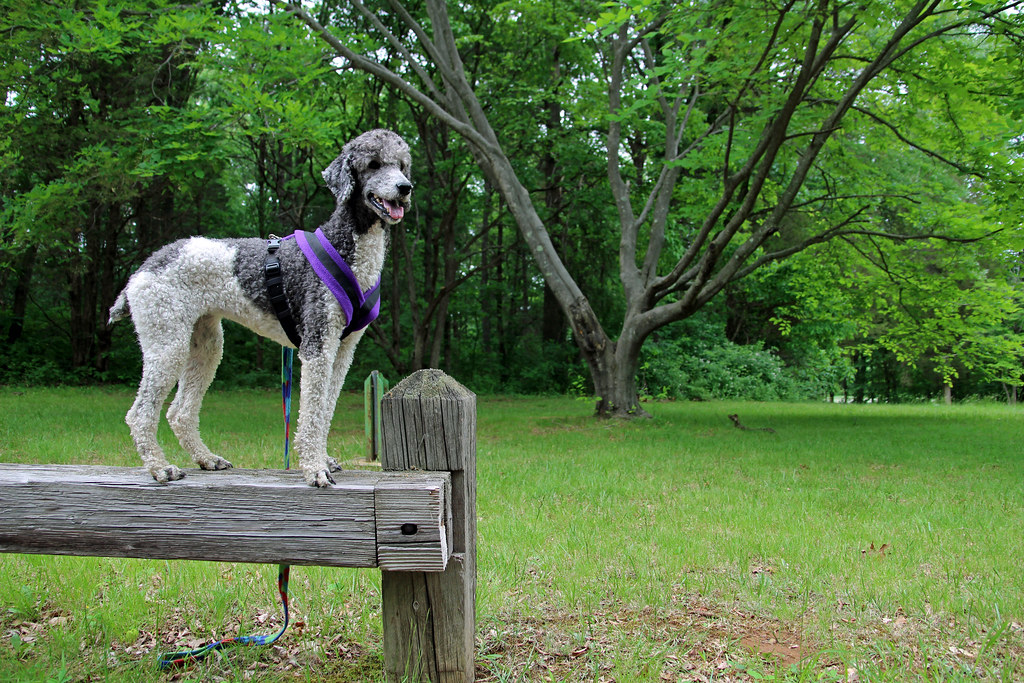 Following that we headed to my main destination for the evening: the Top Rock Trail.  It was only roughly a half mile out one way, but it was ....rocky!   It was a tough crawl up for the dogs but they were game for it.  I just love hiking and I really believe that all of our hiking and rocky/unusual terrain has had tremendous benefits to my dogs when it comes to agility. 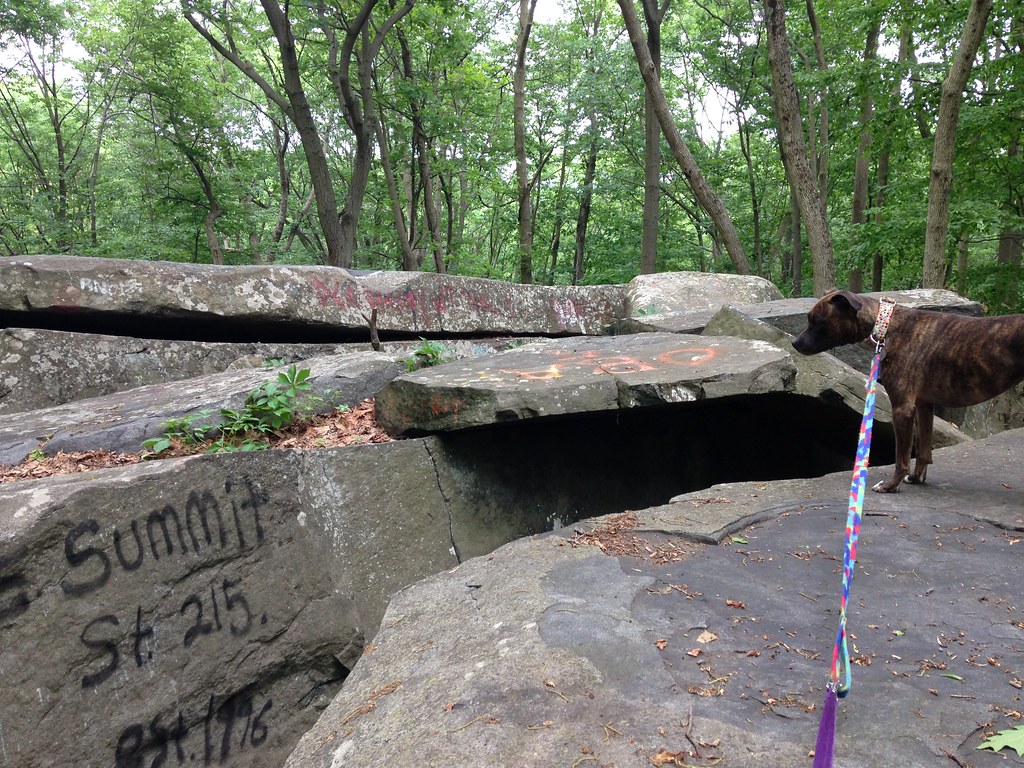 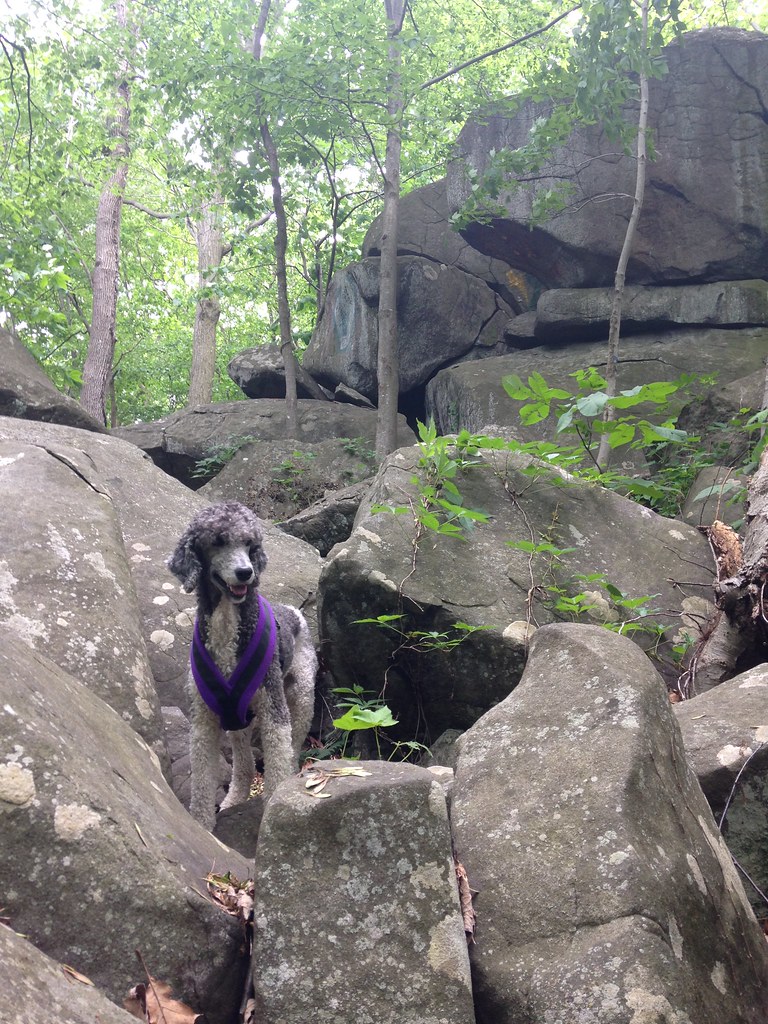 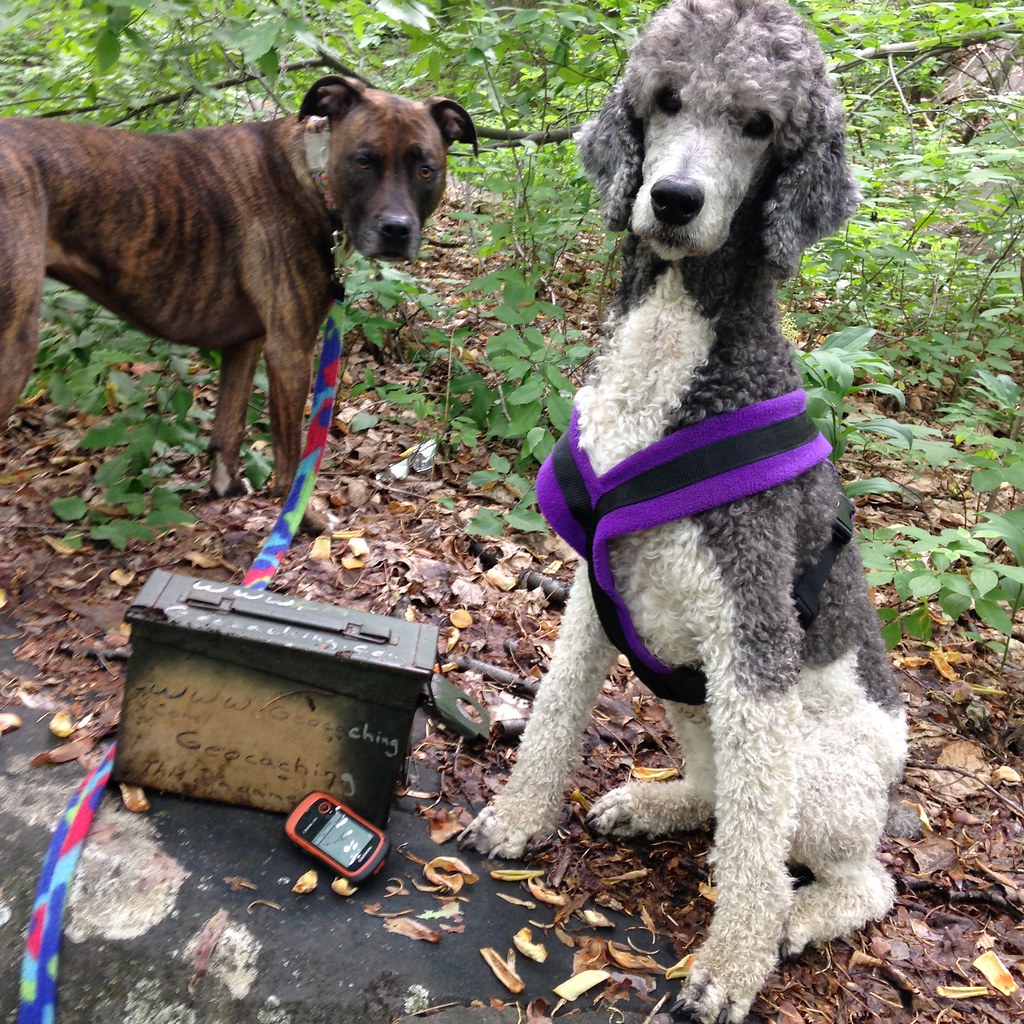 The climb back down the rocks was tough.  Molly was scared.  I did a lot of picking her up and lifting her down.  I did feel bad, it was too much for dogs, especially with Molly on a leash (I am holding firm to her staying on the leash - she always seems to hurt herself if she is allowed to run freeeeeeeeeee.)  I would not take them back there.  Perri is surefooted and graceful and seemed to be able to pick her way through any challenge, but Molly was struggling.  She is bulkier and not as coordinated, but that's okay - she had me to help her out.  One thing is for sure, navigating big rocks is confidence building!  When we finally got back to the bottom Molly was walking with her normal swagger and her tail was flying - she was so happy to be back on predictable and good earth! 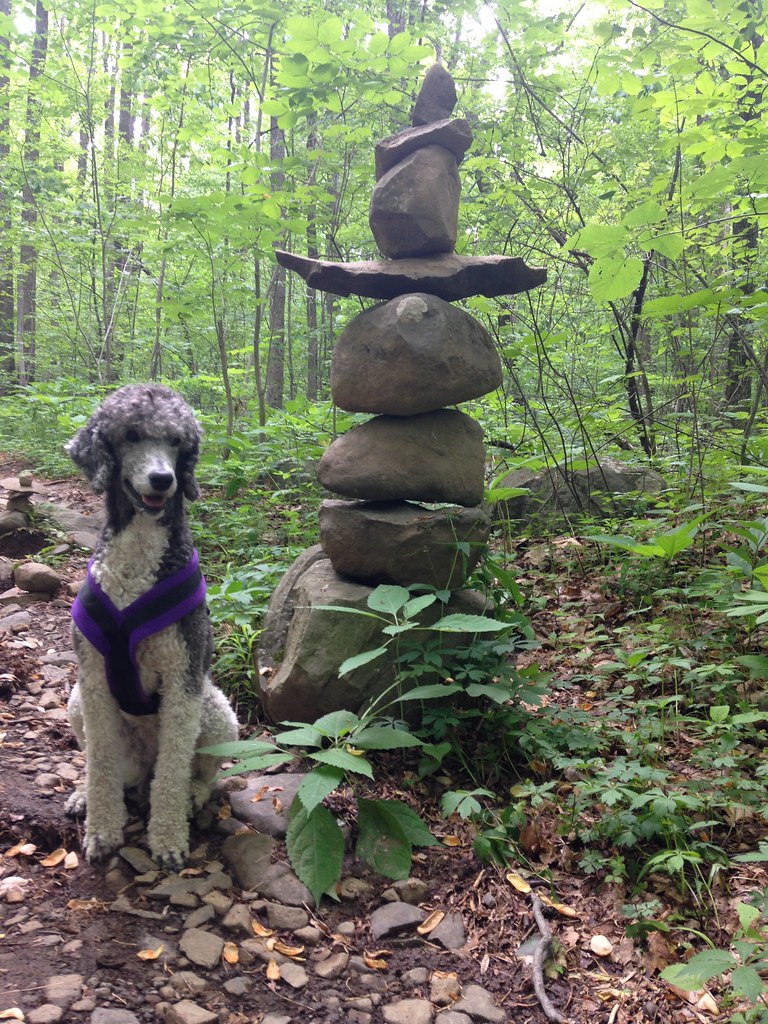 When we got back to the car each dog got a half of a string cheese stick and crashed into a heavy duty nap for the drive home.
Posted by dogbird daily at 8:15 PM