This past weekend was consumed by my dog club's last CPE trial. (We are taking a break from hosting them, possibly a permanent break.) Friday night set up, nearly three hours of dusty equipment hauling, table assembly, organizing and preparing the turf for the morning's events.  Saturday morning was waking up at 4:45am, an hour of day I would have previously sworn did not exist.  I had to help set up the first course of the day and after that it was hitting the ground running with volunteer coordinating.

This is my third trial of full time volunteer coordinating, and it was probably the best.  Workers were eager and willing and I never once had to yell at the top of my lungs and beg for workers.  Nonetheless, with four games played, and those games divided into worker groups for both 4-12" and 16"-24" dogs as well as additional classes for Levels 1 and 2...making sure everyone is where they belong was tiring.  Exhausting.  Not to mention jumping in to teach people how to do jobs, or to fill in when someone went missing.

Hosting agility trials is a ton of work.  You just do not realize it until you jump behind the scenes and becoming a working part in the machine of what makes an agility trial happen.  And oops, I entered two of my dogs in the trial.

I was surprised at how well I handled  my "job" as well as running Molly and Perri.  It helped a lot that I had adequate worker coverage.  Molly was entered in all eight runs.   Perri was entered in three.  Again I ran Perri and Molly in three of the same classes, and they were even at the same jump height!  I must be getting somewhere with minimizing my stress, because just a few months ago I struggled with doing this.  (I am putting tremendous effort into not overthinking everything, though.  One day at a time!)

Molly ran well.  She earned her first Level 5 Championship, for Fullhouse class.  (15 Level 5 Qs in a class earns you that class' championship.)  We finished off Jackpot class for her C-ATCH2.  We earned our first Standard Q since April.  We qualified in Snooker and Wildcard.  We NQd Colors for a dropped bar and Jumpers because I forgot where I was going.  The only downside was that Molly's weave poles were in shambles.  I am crushed and saddened by this, because I really felt like we turned a corner with trial weaves.  I do have to consider how much my mind was stressed by putting in so much work for the trial and hope that this could answer why she fell apart so much.  (She did not get a single entry.  She popped every time, even on 6 weaves.)  Poor Molly. 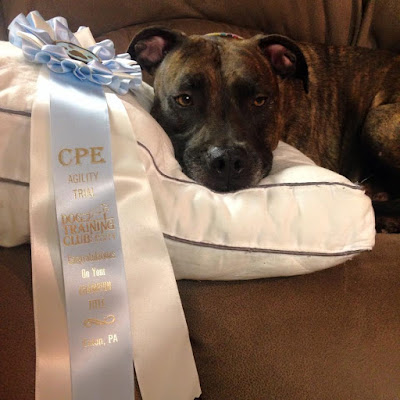 Perri was a hoot.  People think I am making it up that Perri has a hard time running on dirt footing.  In both Fullhouse and Snooker, Perri started off pretty well....but exploded into zoomies, pouncings and growling at me.  I remained stoic and stood still until Perri returned to me with a huff and we finished both runs with an engaged poodle!  Snooker was the funniest because she actually slammed into a perfect down position right in front of my feet with a theatrical growl.  Jumpers was the last class of the trial and Perri ran a beautiful round with no nonsense for her only Q of the weekend.  Goodness!  We are returning to this building twice in July, so I will need to decide if I enter her in a few more runs.  CPE is nice because we have games where we do not have to do the weave poles.  Our trial schedule this summer has been dramatically altered for what I had originally planned (a lot of AKC.), to more CPE to support happy trialing and re-introduce the weave poles slowly. (all of the game classes only use six weave poles which will be nice to help Perri ease back into weaving at trials.)

Speaking of that, miss Perri danced through twelve straight weave poles tonight for the first time in a long time.  I ended it after two successful reps, do not want to push it!  We have been working hard hard hard on weaves.  Well, I have been working hard.  Perri thinks we are just playing another game of fetch and splashing in her baby pool one or two evenings a week with that pesky weave pole game mixed in.  As it should be!
Posted by dogbird daily at 7:35 PM