This weekend Molly and I returned to one of our most frequented trial sites for a CPE trial.  I was hoping that our teamwork and confidence would return at an indoor trial on familiar turf, and it did!  Ringside for the first run of the day (Colors) I had approximately a kajillion times more focus than I did at any of our runs at the outdoor trials.  Colors was typical ass on fire Molly, but she was there with me and trying hard and sending dirt flying everywhere and being my wonderful crazy girl.  After our run she skidded to a stop and smiled at me with her tail wagging and I just felt this moment like she was so proud of herself because she was able to do what I wanted, because her stress level was down enough.


Snooker was next and it was wild times again but we had a good opening...and in the closing I just couldn't believe that she didn't commit to the 3-Tunnel and instead ran with me and took number 4!  I guess she needed a little more support to get into that tunnel.  Oh well!  I absolutely love Molly's signature backwards lurch before she comes off her start line, it is especially exaggerated and hilarious on this run.


Two rounds of Standard to follow.   I only have our NQ on video, but we did qualify in the second round.  Woohoo!  I was trying to collect Molly to head into the serpentine...I thought I had her head when I went to rotate towards the first jump....but I was too close to the tunnel vacuum and I can see why she thought I wanted that tunnel.   Oh well!


Since we got a Standard Q, that makes 15 Standard Qs in Level 5, which means that Molly earned a new title: Champion Standard.  Woohoo! 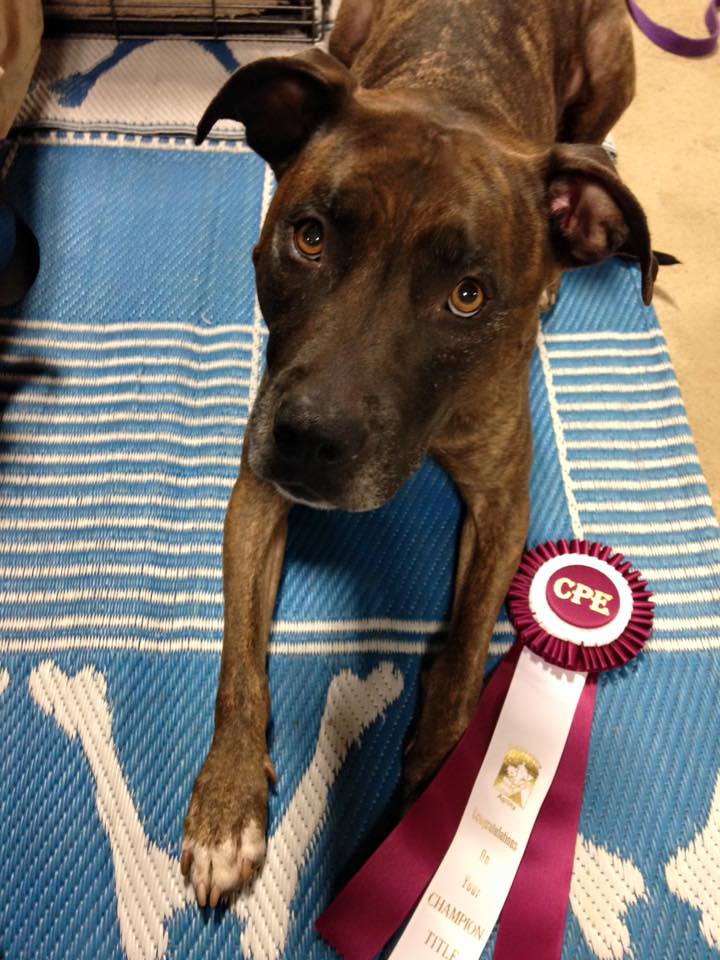 We returned this morning to run Standard only, since it was the first class of the day.  I over-pulled Molly on a dogwalk/tunnel discrimination and she ran out the DW, but jumped onto the up ramp midway....decided that wasn't right and turned around and hopped off.   Even though refusals are not faulted in CPE, Molly had all four paws on the contact and the "four paw safety rule" dictates that I could not ask her to reattempt the contact obstacle, so we had to continue.  We ran alongside the dogwalk to begin the next sequence and she hopped onto the end zone and did a stopped contact for me.  Very cute, Molly!  I praised her and just melted inside, I loved that that she still hopped up there and did the correct end behavior!  We continued on and she ended up on the dogwalk again - hard to explain how without the course map or a video, but there she was!   And she did another stopped dog walk.  Haha!  We finished the rest of the course without incident, including a weave entry and staying in, even with a tunnel at the end of the weaves (this usually causes her to pop.)  Silly silly run with a lot to be happy about!

And the grand total for the C-ATCH2 is: 1 Snooker, 1 Jumpers, 5 Standard.   Coming right along!

But that's not what made me happy this weekend...it was having my girl happy in the ring again, smiling and running and confident.   Everything else is just gravy.
Posted by dogbird daily at 6:27 PM