Perri had her appointment with an opthamologist last Thursday!

They started off with inserting a little strip underneath each eyeball to measure tear production.   That test was normal.   I was surprised Perri tolerated that as well as she did. 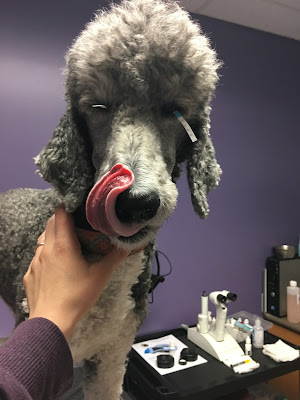 After that, a series of drops were put in Perri's eyes, I think there were about three different kinds of drops put in.  We waited about 10 minutes and the opthamologist herself came into the room to discuss what has been going on with Perri, and to perform the testing. 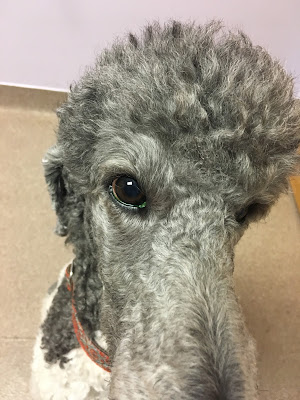 All the lights went out and my focus was on holding Perri securely.   There were flashing lights as Perri's eyes were checked as well as a device much like I have seen at the human opthamologist.   I sat in back of Perri and held her body against mine and kept her chin up.

The only finding was that some of the vessels in Perri's retina are thinner than they should be.   This would affect Perri's low light vision if it progresses.   However, it is entirely possible that Perri's eyes have always been this way - and there is no way to tell.   Recommendation is to return in six months to a year.   If the vasculature becomes thinner, we know it is a progressive condition.   If it remains the same, then it is the way Perri is.

I feel pretty great moving forward that we aren't looking at any major issues!   Perri also did really really well in the waiting room.   She barked at one large dog that was walking towards her but quickly refocused on me, of her own choosing.   And I had very good treats to reward her.   She did a lot of "look at that" and made great choices.   The last time we were in awaiting room since Perri was bitten in the woods was at our chiropractor's office, and Perri was a mess in the waiting room.   So Thursday's behavior was very encouraging. 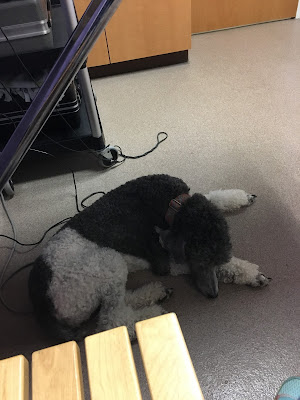 Posted by dogbird daily at 5:45 PM