Saturday and Sunday Perri played some USDAA Agility, and she did pretty well considering we left Molly at home both days.   I was nervous about that, but I know I wasn't on stress/worry overload as I was earlier in the year when Molly's health was a bigger question mark.   I tried to be careful to give Perri plenty of time out in the car, away from the noise of the trial, as well as walk arounds with pets solicited by fellow trial goers and friends.

Perri did Gamblers first and I was very happy with the opening!   And I think that if I had handled Perri to the first jump in the gamble correctly, she probably would have done the whole thing!   As it is, she ran right out to number 2 and responds to my call off of the third gamble obstacle - I seriously think she would have carried right over onto it.   She was really flying!   I felt like this gamble was over Perri's experience and training level and was definitely not handling her as well or as confidently as I could have.


Standard was next and while Perri ran clean she was 3 seconds over time.   Disappointing!   The Aframe is eating up our time, it continues to be a problem because while Perri will let me manage it, she is starting to be reluctant to come down because the criteria is unclear.   Or, something.   Whatever it is, it's my fault and she needs more training!    I'll own it!   The weaves and the judge visiting also ate up some time too for sure.


Our last run of the day was Pairs and while I have a video I do not want to post it.   Since this blog is public I'm not going to get too much into a rant, but I just want to say it was the first time I have ever been paired with somebody who was very unsportsmanlike and I have been doing USDAA off and on since 2013 - not a long time, but long enough.  My dogs and I have Qd with Pairs partners, we have NQd with Pairs partners with the fault being shared on either end.    On Saturday Perri's speed, particularly in the weaves, was criticized and let's just say it was the pot calling the kettle black and I think that sort of attitude has no place in agility.

I'll say it again, I work in a hospital and I see people whose lives are destroyed by illness and I see very sad things - so for me to see people behave with poor attitudes during a sport is something that I am judgemental of.   We are so lucky to be in the ring with our partners, you are lucky when your dog is sound and when your dog wants to play the game and you are lucky to have your own health and can afford to play agility.   I am always aware of this, and even more acutely so since Molly is at home resting off an injury that could possibly end her agility career. (lalala not gonna happen!)

So.   Just be happy that that other person on your team is just as lucky as you are, getting to get in there and play the game.   And if you can't, here's your crummy $14 entry fee, sorry if you feel I wasted your time.   Get some perspective.   *smile*

Anyway!   We also worked on some nose touches on the baton ahead of time.   There was a tricky off course spot that I really did not handle smoothly because my mind literally could not front cross, switch the baton into the opposite hand and keep it hidden from Perri all at the same time.   And at the end I remembered to put the baton down behind me, then pick up Perri's leash and put it on.   I was truly very happy with the improvement.

So that was Saturday!   Sunday started with Jumpers and on Day 3 of agility, I thought that running with Perri down the 3-jump straight line and front crossing into the 90 degree turn to the right would work beautifully.   No!   Perri was not tired, she needed no cheerleader.   She was a speeding bullet, straight off the start line and I could not possibly catch up!   We earned an off course tunnel right away and then there was a barking and a play bow - frustrated at my slowness and inadequacy!   Well!   It all made me happy though, to see her running fast and full of energy!

So in Snooker we had nearly the same three jumps straight back in my plan so I put her in a start line sit-stay  and led out.   And released her.   And she stuck to the floor!   Oh no!   Why, Perri, why?!   It took about five times for Perri to uproot from her spot and come down the jumps, quite uninspired.   We got through our closing and now I really was trying to power her through the closing so we could make time!   The weaves were #7 and I had arranged it so we did not need them to earn our required points.   Over 2 and into the 3 tunnel and suddenly someone started cheering, and then multiple people started so Perri came out of that tunnel and heard people cheering for her and she lit up and started running!  I could just see her whole demeanor change and that silly poodle look came back into her eyes.  I was so happy and grateful for this display of wonderful sportsmanship and support and was so touched by the change I saw in Perri when she heard that.   And then we finished and she was wagging and wanting everybody to pet her - oh what a funny girl!!

In the end, Standard really stole my joy.  I let pressure creep in - I wanted Perri to make time so I pushed her.   We did okay until the teeter.   You can see on my Gamblers video, some lingering on the teeter when I front cross it as Perri is ascending.   She did that for what felt like 10 seconds on our Standard run, though I am sure it was less.   She completely froze on it.   That really messed with us, it flustered me a lot and she could tell that "a mistake was made" no matter how encouraging I tried to continue to be.   And that meant weave faults.   And then I got lost.   And then there was a a jump to tire to two jump speed line for the end of the course.   I sent her over the jump and said, "Go go go!" and she was flying then!   Didn't collect for the tire and ran under it but flew over the last two jumps and again tried to flirt with everybody outside of the exit!  (after getting her leash on!)

Last night I was crushed.   I hadn't reviewed the videos or thought about the teeter issue, it just felt like another Perri issue.   More weave issues.   Running under the tire again.   Inconsistent attitude.

When I started doing agility with Molly, I resented her for not being Ein.   I resented her for being sound and young and strong enough to do agility while the dog I really wanted to play with could not physically handle the sport.   Her intensity and poor impulse control and low frustration threshold irritated me to no end.   She would bite me and hump me and embarrass me and I could never think straight because she ran too fast for me.   But she was all I had and so, I let her teach me and while it was no easy journey, it was just what I needed.   And now here I am again, resenting my dog.  Not for not being Ein or Molly, but for being so confusing, for being a puzzle that I feel like I can never solve. 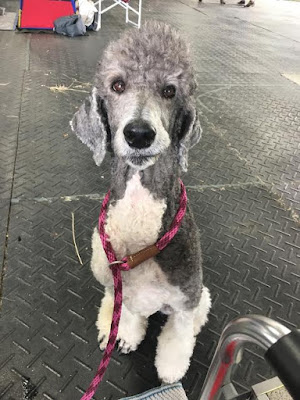 If she would be one way or the other I would know where to start.   But she's not!   She's either high as a kite and running at top speed or she's in beaten dog mode.   And I never know which to expect and that frustrates me more than anything.  But this morning I decided that instead of continuing to despair over Perri's inconsistency, I will just train some more.   I know how to run Perri when she is slow and half shut down.   So I'm going to focus on teaching her skills that we need when she is running fast.   She won't always run fast but when she does, we are wildly unprepared.   More distance skills, rear cross and my favorite tandem turn that has been so kind to me and Molly.   Yes, Perri never learned the rear cross!   Not really surprising when the first 2 years of her agility training life were spent just working on keeping her engaged.   And Molly was born knowing the rear cross.   We also need to work on confidence on the teeter when I front cross it.   I don't have a teeter so we will just need to work on a plank for now and try our best.   And, collecting to do the tire when running goes on the list too.   When I look at my task list I feel like I have taught poor Perri nothing at all!

P.S. Molly is no longer limping, she is moving well and stretching pretty well.   She does not like the shoulder extension passive stretch so I have chosen to substitute it for the play bow stretch since that extends her shoulder nicely and she is always happy to do that (It is one of our pre-agility run stretches.)   I wanted to see if it was a pain reaction or just being irritated at me doing something stupid to her, and she reacts the same when I stretch her right shoulder.   "Stop doing that I hate it."  So, active stretching it is.   Her medial paw is still tender and she reacts if I touch it.   I am considering taking her for an x-ray at our regular vet, and I think I would like the opposite paw as well for comparison.
Posted by dogbird daily at 10:52 AM