Way back in March, when it became evident to me that Perri and I were experiencing a progress backslide in a big way, I mentioned that I felt it was time to try some medication to help with her anxiety.   And that I would likely avoid it for some time more.

And I did.   I started Perri on an over the counter supplement called Composure and experienced some moderate reduction in Perri's stress behaviors.   Her refluxing decreased and her explosive reactions towards other dogs diminished (did not disappear.) and I felt we were able to make some training progress on that front.   Very encouraging, until we stalled.   Agility continued to be an up and down, upsetting battle for us until a month ago when I finally decided that both of us had had quite enough.

But other areas of Perri's life were not improving, they were getting worse.   Perri's stress drinking had escalated to the point where she was drinking so much that she was leaking urine in her sleep at night - I even had to buy diapers for her.   This makes me feel very embarrassed.   Even if I would let Perri out just before bed, she would either have drank so much that she could not empty her entire bladder, or she would drink after I had gone to sleep.   I had to get strict about pulling up all water bowls at 8pm.   This caused an issue in the morning before work though.   On occasion, Perri will have episodes of paralysis in our own yard where she is too busy staring and scanning the area to focus on peeing.   There are times when Perri will be so caught up in this behavior that she will out right refuse to pee and will "hold it" until I get home from work.   That's about 17 hours or more.   When I started to take up the water at 8pm, I feel I took a coping mechanism (her drinking) from her, and it increased the scanning in the yard as a result.   Not only did she not have to pee badly from all of her obsessive drinking, but she was not able to relieve her anxiety with her drinking coping mechanism.   There was a specific morning a few weeks ago that I watched her scanning the yard, totally lost in her world and refusing to pee for me.   I was so frustrated with her I could scream.   I took her out three separate times that morning and she could not come "back to earth" to pee.   I was late for work.    I have been late to work because of this behavior in the past.

This was my breaking point.   My dog needed help.   I have worked so hard with her all these years and she has worked really hard too.   We have come so far together.   And this year has made me feel like a complete failure to her.   All of our progress seemed plateaued.   I was and still am devastated, but my human emotions are no help to Perri.   She needs help.

I scheduled an appointment with a highly recommended veterinary behaviorist  and over two weeks reassured myself that this was the right decision.   It has been a grey area for me.   My dog is not crippled by her anxiety.   Separation anxiety used to be a problem for her first year with us but she responded so well to training, became comfortable in her environment and bonded with us and our other dogs.   Crate anxiety seemed to be linked in with the SA but we were also able to resolve that with training.   I know that we are so very fortunate for these accomplishments that Perri was able to achieve.   She never becomes a panting, shuddering mess.   She has never bitten anybody or another dog.   She does not pace and refuse to settle.

I was asked at our appointment many questions, but I was asked what I feel that Perri's biggest issue is.   I said that it is Perri's scanning environments, what I am told is called hypervigilance.   Perri is not frantic but she sort of stresses down into this stoic trance and just stares and turns her gaze over and over the environment, like she can't possibly come to terms with it being a safe place to be.  Stuck in her own personal hell.   It breaks my heart more than anything else because it makes me feel the most helpless.   Sure enough, she did this exact behavior in the exam room (despite it being a very cozy room with a couch for us to sit on and no tell tale metal exam table as a typical exam room would have.)

Other issues discussed: the fear reactivity episodes towards other dogs (the exploding and lunging), the obsessive drinking and nibbling (displacement behaviors), the extreme startle responses to any object she perceives as a threat (keys, brooms, the baton on agility, etc.), her intense aversion to harnesses and things being placed over her head and our lack of progress on this front.   The more I talked about life with Perri the more sad I felt for my strange funny little dog, trapped in her own personal hell.   Agility trials and what has been going on there was certainly discussed, but they are not my focus.   I see a very clear plan there for Perri and I, and I have already identified a lot that I can adjust about my own behavior and expectations.

Since I feel that mine and Perri's progress in training has stalled I was very open to the idea of medication.   We discussed various options and the positives/negatives of each, which I did find to be a bit overwhelming.   Big decisions.  We ultimately decided to start on Fluoxetine (Prozac).   This may not be the right medication for Perri but it is where we will start.   It can take some trial and error and patience to find the right medication for your dog, and I understand this and am open to it.

I was told to expect some sleepiness and that GI side effects could be possible (diarrhea, vomiting, loss of appetite.)   We are about four days in at this point and I have seen no sleepiness but Perri has skipped a meal here and there or half a meal.   That is not unusual for Perri.    No reflux or GI upset.  We will not start to see effects of the medication until up to weeks 4-6, though many dogs respond sooner.   I am very glad that I chose to stop doing agility trials with Perri, it really takes the pressure off and allows us time to adjust to our new venture.   We will continue the Composure.

It was a little tough for me to decide to write this all out, knowing that while I may not exactly have many readers - this blog is public.  And this is a decision that I feel sensitive about.   It is not a decision I came to easily or made lightly.   It is recognizing that my dog's brain isn't functioning correctly and after five years of training and work, her brain needs help to work better.   I want Perri to feel safer in her world.  I intend to give her that help no matter what, because I sure have tried everything else to the best of my abilities (with great successes!)   And so, I have written all of this.   So that I have something to refer back to some day, and so that maybe if another person is where I am at - they can read what Perri and I have done.   I know I have read other people's stories online and they have helped me a lot. 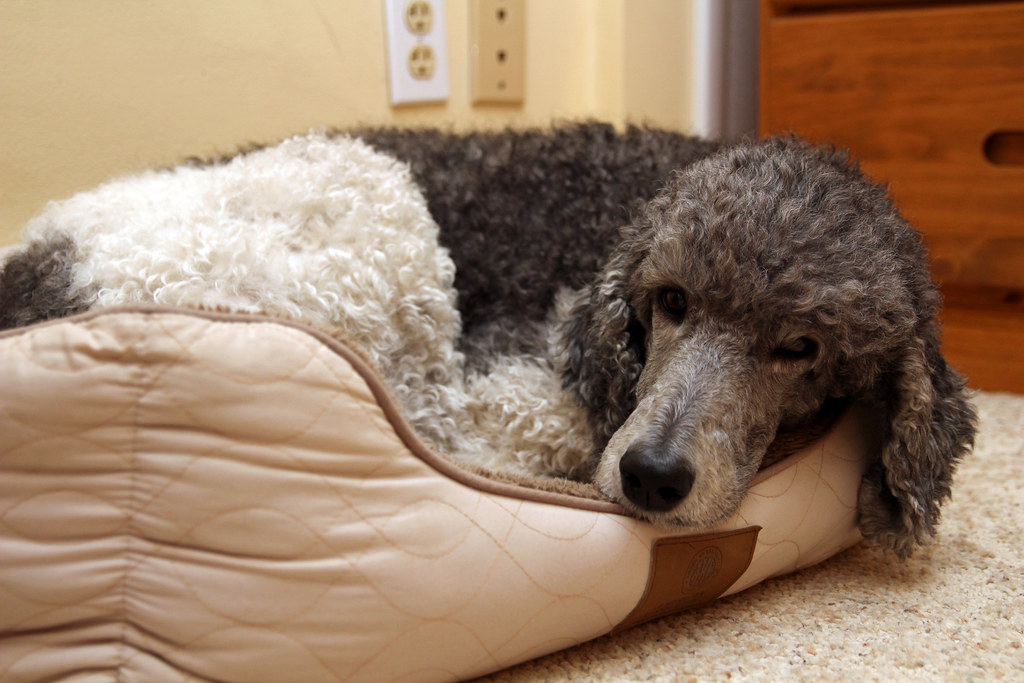 Posted by dogbird daily at 6:53 AM