Sunday was Fast CAT day!   I really enjoyed my first Fast CAT with the girls in the spring and was looking forwards to another day of it.  While this sport is not something that I could enjoy more frequently than a few times a year, I think doing it on occasion and allowing my dogs to be total barbarians is sort of liberating.   Ha. 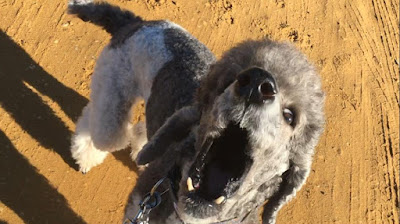 There was an AM and a PM trial, so each dog got two tries each.   We were very fortunate to be on the top half of the run order, Perri was #26 and Molly #31.   Perri got to go first and clocked in at 9.76seconds (so, 20.95 MPH.)  Quite a bit slower than her personal best, but honestly...I can't say how much I enjoy watching Perri going all in and just enjoying something!  On Perri's second round in the PM trial though, she pulled up short and refused to go through the cones and timers at the ending.   She ran back to me!   Perri had returned to me in the AM trial, but she had gone through the timers first.

I was very upset about this at first.   Perri can't even chase the bag without freaking out about something.   This. Just. Sucks.   So tired of my dog having her life ruined by fear.   Upon further reflection I thought about what happens at the ending: the delightful chase ends abruptly.   Strangers converge upon the dog and come at her with slip leads to hold until the owner gets down to the other end.   Does that sound like something Perri would like?    While Perri does love people, the abrupt shift in activity as well as people coming to put things over her head....it is no wonder she returned to me the first time and unsurprising she refused to go in there at all the second time.  I actually think that she slowed down towards the end of the first trial as she came into the finish line.   The timer handed us our time slip and said, "We can't believe she got a time this fast, it looked like she was barely moving!"   At the time I just laughed and said "Poodles float!" because they do cover a lot of ground with seemingly no effort, but I have to wonder if Perri slowed down her sprint significantly because of people at the ending.    As usual, things are a bit complicated with Perri!   I have three choices: no more CAT activities.   Coursing ability test only (600 yards, ending where she starts so I am the one to catch her.)  Or, get somebody else to hold her at the start of the Fast CAT and I can go down to the end line to catch her.   I already suspect there could be some issues with an unfamiliar person holding her at the start so I would need to bring a friend along or find somebody familiar to her at the trial who would be willing to build rapport with her before her run.    Or.   God forbid, Vince could join us and release her!   Oh heavens no, Vince coming to a dog show! 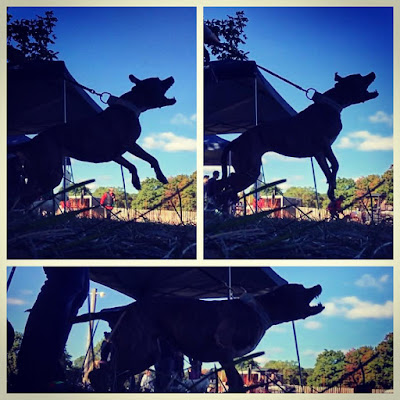 Molly was much less complicated!   7.88 and 7.99 in the AM and PM, 25.95MPH and 25.60MPH!   Not beating her personal best but still very respectable!   I was told down at the finish that Molly released the lure, allowed the leash to be placed on her and was very polite.   Good little barbarian!   I am proud of her manners down at the finish with strangers.

We will return in the Spring for more Fast CATs and I am hoping to finish Molly's BCAT title then.   The titling system for Fast CATs is to use your MPH and convert it into points.   At this time with all three of Molly's scores she has 80.77 points.   If she continues to average at least 25 mph, she would need to run three more Fast CATs to earn her title.

BCAT is 150 points, DCAT is 500 points and FCAT is 1000 points.   I think a BCAT is a fun goal for Molly and I!   My main focus in on a day of fun and barbaric behavior and foolish bag chasing, but hey if they want to give us a pretty ribbon for that I can't say I wouldn't enjoy it!

And at last, a compilation of the lunacy of Bag Brain Day!


Since the trial site was only about 20-25 minutes from the coast, I treated all three of us to a drive out there to the Asbury Park Dog Beach.   We did not stay long but the girls enjoyed some off leash time and ball chasing.   Unfortunately when I got home, Molly was quite lame on her bad left foot.   She was moving well when we got to the beach so I don't feel the Fast CATs were to blame but they certainly didn't help.  (add in the day before's agility runs and the 2-3 hour hike.)  The beach was not a great shore line.   It was all fluffy sand with a sharp slope down into the waves, which were fairly rough.   I did not want to keep throwing Molly's ball into the surf because she drinks so much water when she swims, and drinking that much salt water would be disastrous for her bowels.   Considering a few weeks ago I had her in the ER for GI issues, I did not want to push it!    This resulted in a lot of throwing her ball into the loose dry sand, which meant a lot of power sliding on poor footing. 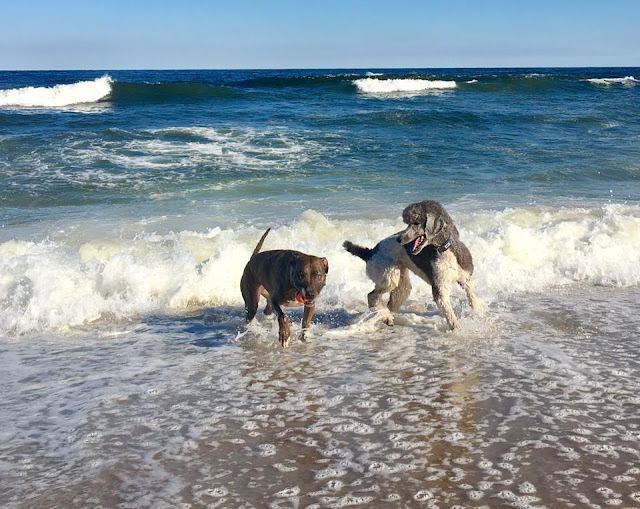 So, next Spring we will play more Fast CATs but no beach trip afterwards!   Molly has never had issues with lameness on our beach vacations in the past, but the beach that we go to has a different layout.  I have no regrets!   Molly is my rock, she plays agility with me whenever she can, no matter what.   I owe her so much.   A day of self destructive favorite activities is the least I can do for her.   Molly is already walking well again and her pain responses to toe massage have stopped. (the most painful area was actually her "outside toe", the toe on the opposite side from her arthritic area.   Compensation most likely.)   From the start her shoulder was stretching well (whereas last time this happened, she was resistant to extension.)    As a precaution I scratched Molly from this Saturday's CPE Agility trial, I want her foot to have a proper amount of rest.
Posted by dogbird daily at 7:31 AM