I worked up the nerve to enter Ein in another CDSP (double) trial.   Truth be told I almost cancelled my entry, fretting that he was simply not ready.   Especially not for his Go Out.   But I kept the entry.   I picked a trial with a judge I love and who I knew I would feel comfortable with.   Ein and I have worked hard on his Go Out as well as some other problem areas between Spring and now and I really did want to see how things were looking.

This particular trial building was perfect for Ein.   Ring separate from crating and spectating.   Steward table off to the side in the ring rather than at one end or another.   The ring entrance was a doorway with two foldable ring gates stretched across it.   Wide, and it allowed room for spectators to see in, but not on either of the ends of the ring where Ein would need to run towards or away from.   Cool.

Ein's heel off lead was laggy on the first trial and he had a missed sit because the heeling pattern ended right at the entrance of the room and he got distracted momentarily by spectators.   I was told a missed sit is -5 points but a verbal cue to sit would have been a -3 points, so best to give a verbal if I'm not getting a sit. (And really, best to support my dog too.  Bad Handler.)
Running broad jump, good!   The BJ was right by the spectator gate and I was happy with how he handled that.
Drop on Recall, good boy!   I can't remember but I think he anticipated the finish on this exercise.
Retrieve on Flat great!!    No anticipating the send, picked it right up and was fast! (and adorable!)
Retrieve over High Jump Ugh!   Retrieved the DB and then came wide around the jump and....didn't take the jump.   We've worked on off set pick ups of both treats and the DB and he catches the jump.   The judge reminded me I could have cued the jump as I saw he was coming in on the flat, I did not know that!   (I forget to ask if was points off, not that I care but it would be good to know.)
Go Out was okay.   He went out but sort of started this arc and return to me.   I just cued him to sit by the gate and returned to him.   Not bad, definitely and improvement!

I was super thrilled with Ein's attitude and work in the first trial and really felt like our hard work has paid off.   Ein is loving being in the ring.

Perri got to play in Novice C (in CDSP Novice C class is for dogs who have earned their CD-C title).   I tried some tricks, having some super high value treats.   Asking a friend to hold Perri for me right before my turn so she would be excited to be with me when the leash was handed back over.   Perri still flattened out for the ring.   Dutiful flat heeling for the heel on lead (though only 1/2 point off.), she did perk up about half way through.   Figure 8 was....well we got eight points off for steward sniffing and getting lost with stewards.   Sigh.   No deductions on the Stand for Exam or the Sit-Stay, and a half point off on the recall for a crooked sit.   Strong finish!   The judge even pointed out Perri's tail which was firmly slammed down for her whole time in the ring.   Like everything with Perri, I know she is capable of loving the ring but today was not her day.   She was still a very good poodle and tried very hard for me.

After that I stewarded in Utility and before I knew it, it was Ein's second turn!   Heeling was much prettier this time, but he had some other tricks up his sleeve!   Broad jump was good but Ein went right to finish position afterwards and grinned up at me.   Clever boy!   Drop on Recall was great but the same thing, why front when you can just go straight to finish??   The retrieve on flat he amped it up to a new level by dropping the dumbbell at my feet and speeding into heel position.   Oh my!   Too much!   For the retrieve over high Ein returned over the jump no problem and I firmly reminded him with a verbal "front".   He say quite squarely, held the DB until I took it and did a finish when told.   What a hoot!!   Still in the realm of the (barely) qualifying, we proceeded to the send area for the Go Out.   I made a fuss of showing him his mark, stood up and sent him.   Beautiful rockstar Go Out, stayed put while I returned around him.   Besides the extreme naughtiness on the fronts, it was our best run yet!

And I still did not know if I qualified.   I'm not terribly savvy on the rules and I wasn't sure if we lost too many points on all those missed fronts and especially the dumbbell drop.   But then I heard our "Open A dog qualifies with a score of 179.5!"   I raised both arms up, so happy!   Our first Open leg!!   We did it! 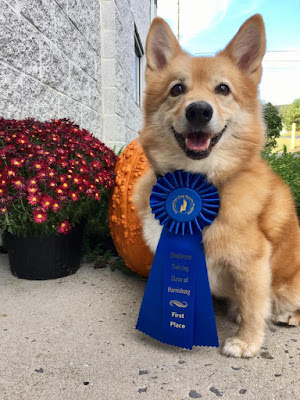 Posted by dogbird daily at 6:28 PM