Beach Dogs and Molly Catch Up

Last week we took our annual trip to Cape May, NJ.   We have been going there for years now and have decided this will be our last visit.   Time to explore some new places!  It is so hard to find off leash areas for the dogs to run, so much so that between Vince's busy work schedule and wanting colder weather (therefore less people.) we visited later this year than we normally do. 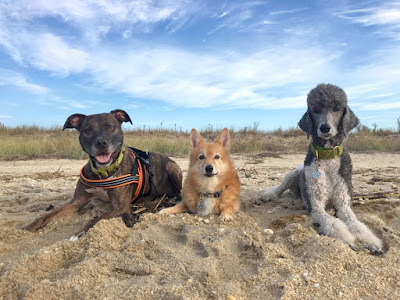 We were rewarded, especially on our last day (with temps in the low 40s and a storm rolling in), with little to no people.   The dogs were able to enjoy a whole lot more off leash running time.

I was nervous about how Molly's foot would hold up on the sand, especially since we had an agility trial about three days after we were due to return. I refuse to keep her in too much of a bubble though, so she got to do a fair bit of ball chasing. Last year I had a pretty full proof system in place: backpack for poop bags, chuckit, balls and anything else. So sadly, no camera. It sucks and I so miss having my SLR, but until I grow some extra arms it had to be sacrificed. The iPhone is much easier for snapshots, lower quality but I've always been of the opinion that composition is so much of what makes a photo beautiful, not equipment. 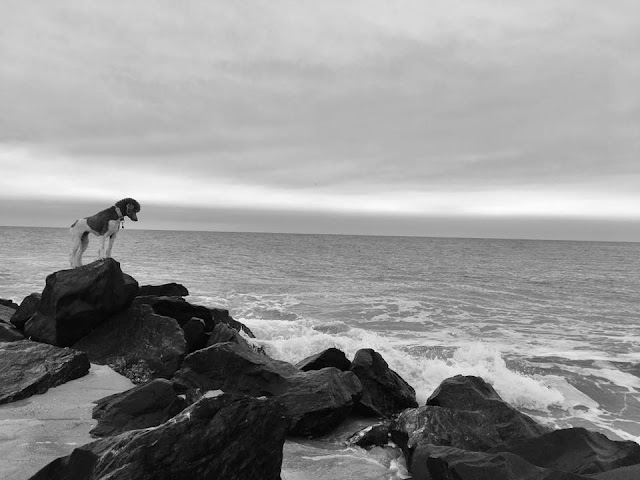 Ein freely off leash.   Either Perri or Molly off the leash alternately.   I did try a fair bit of leaving Perri off leash while playing ball with Molly, but Perri was so rude with her biting and chasing behavior that I had to leash her.   Molly gives Perri absolutely no corrections for her behavior, but simply chooses to go "out to sea" with her ball to avoid being pestered.   That doesn't work when it is in the 40s and your dog has no coat! (Not to mention, Molly drinks water while she swims and we don't need any salt water induced diarrhea!) And Molly is only permitted off leash when we are playing ball. Without the ball to occupy her she turns her attention to bullying the other two dogs relentlessly.  Despite all these "rules" they all had a great time!

An excellent example of Her Royal Pestiness! 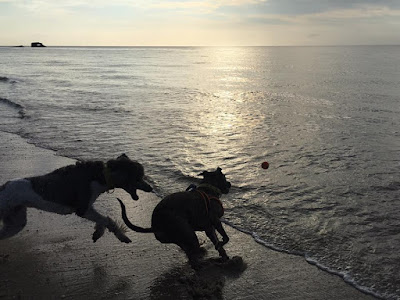 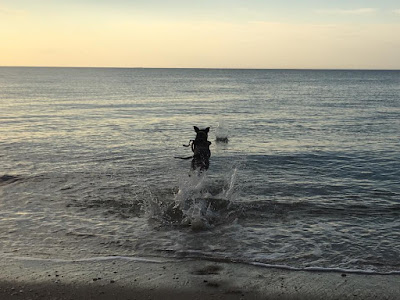 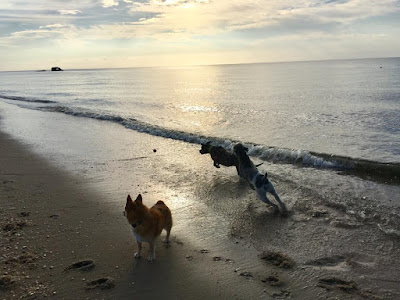 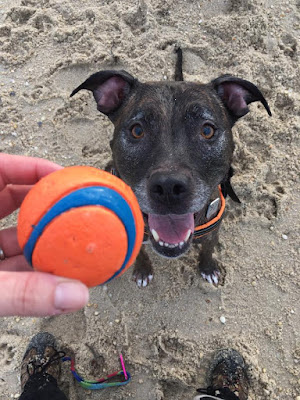 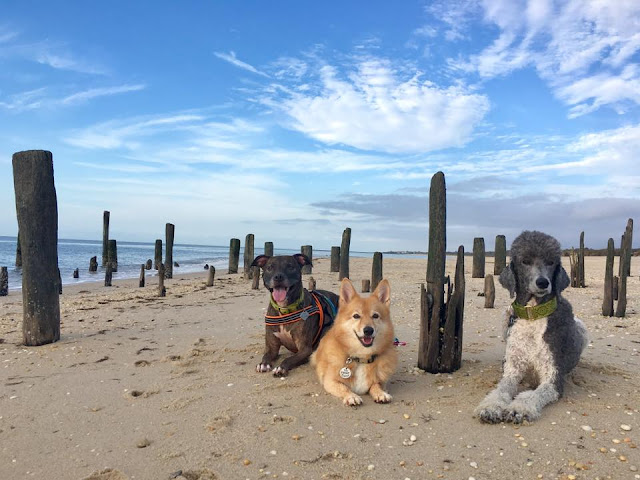 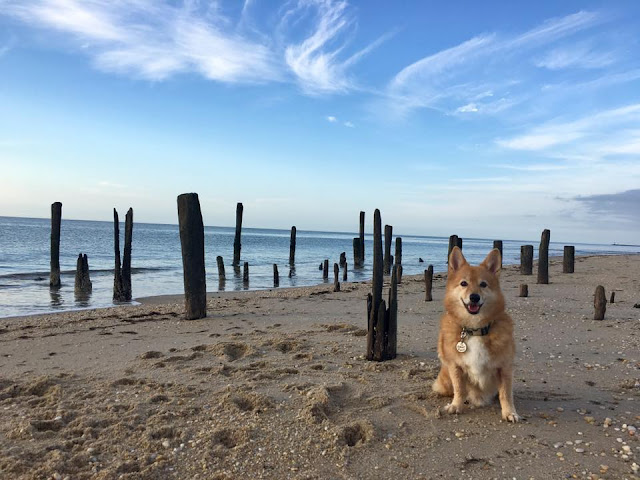 If it fits, I sits! (yes, she did jump up there herself!)
I lifted her the first time but then asked her to get back up and she did. "Her powers of levitation would make a fakir stare..." 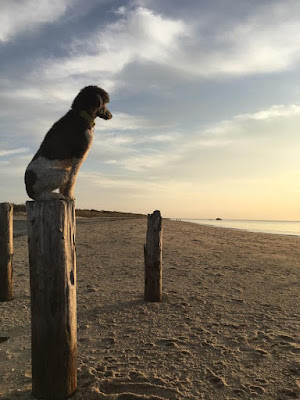 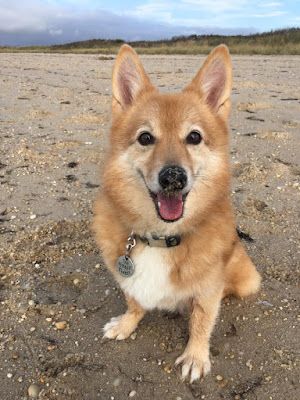 Molly's foot issue did not act up, no limping!   She did have her usual sand-induced skin breakdown in between her paw pads though.  When we got home I gave her a bath and soaked her feet in Epsom salt, and despite having cleaned the sand out with wipes after each beach visit, I still got more grit out in the tub when I massaged each foot!   She had been licking obsessively until that bath, so even though I got the royal stink eye for bathing her, I know it made her feel better!   I also massaged a new shampoo into her feet that I have been trying for Ein by Espree.  Molly usually fights me in the tub "tooth and nail" but she stood quite still and tolerated her feet being massaged. (Molly has no issues with me handling her feet, she is my best "paw dog", but when it comes to a bath she says no thank you! to everything about it!)
I also noticed a favorable difference in Molly's hips this year. Because of what we were dealing with in her left front foot, I doubled the dose of Dasuquin I had been giving her after the first episode of lameness in that foot. After she improved I backed off to maintenance dose until the beginning of October when the limp returned after a day of Fast CATs and beach play in very loose sand. Last year at the beach I remember Molly dragging her hips up, she was very stiff after playing on the beach. This year I saw none of that and I have to think that the doubled Dasuquin is to thank.   Good stuff!

With Molly's soundness under discussion I will roll right into a quick update about our USDAA trial from last Sunday!  We have done little trialing since September, with the exception being a very short day mid-October where Molly took a crash on the dog walk after a very poor approach.  Although Molly seemed quite sound afterwards, I didn't feel much like playing.   So, last Sunday I was hopeful for an enjoyable day. My main focus was on my weird ring nerves in the Masters ring, my feelings of self doubt and inferiority.  I actually put a little meme on my phone with a message that encouraged me and made me smile all throughout the day. 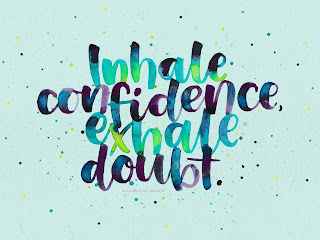 I do not want to be a handler who lacks confidence anymore. I really want to tackle this and overcome it. I was feeling pretty good about our Jumpers course, though mildly obsessing about a wrong course tunnel. By the time we went ringside I was intensifying in feeling some of those feelings of being worried of making a fool of us, of failing, of not belonging. However, my focus for this trial was honestly to address this issue I am having and by the time we took the line in Jumpers I was working hard on exactly what the meme above states: being confident and not doubting myself. We won our class, our first Masters/P3 Jumpers Q. :) 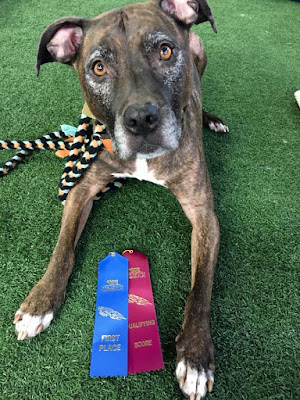 The rest of the day was a lot of waiting as Biathalon Jumpers and Grand Prix were in the run order and we had not entered either of those. (I keep saying when we get a Steeplechase Q we will then try Grand Prix!) We had Gamblers and Standard remaining. Here is our Gamblers run, which I did not love. Molly was sort of tired, not very fast, and I gave her an awful approach to the Aframe for her first time. While we got whistled on the Gamble (hmph.) we did complete the distance challenge so I was happy with that!


In Standard I had the same kinda ho hum pokey dog, though we did run our first clean P3 Standard! We were one second over the SCT but I am still grateful for what was a very nice run! However, Molly's inability to run three agility runs in a day without becoming so tired that we are overtime was initially upsetting for me. It brings up another issue that I have:beating myself up for days after a trial over every single thing I did not like.  Introspection is good but I take it too far!

However, introspection on Molly's energy and speed makes me realize that I truly have let her become a "weekend warrior" and as she is getting older, she is not able to maintain endurance on just being young and in condition.  Because...she is getting older and I am not keeping her in proper condition! Perhaps I could blame her feet still being sore, or fret that her lymphoma is becoming symptomatic, but I don't think so. Really, beginning this year more than ever, if Molly doesn't want to go walk or hike, I leave her home. Molly's exercise is so sporadic, it could be only a walk every two weeks or a hike here or there. Starting this week I have tried to take Molly on a 15 minute walk every day. It is not much but it is better than nothing and it is a start. (Our usual weeknight exercise is an hour+ walk perhaps 2-3 times a week, and again if Molly doesn't want to join Perri and I, I just shrug and go on without her. No more!)

Six days later I have already created a monster, Molly has more energy! While she would normally eat her breakfast and go back to bed on a lazy weekend day where I am at home doing chores and bills and drinking coffee, guess what. She was pestering me for her walk! I love it! Now, I just have to start saving up for a Dog Pacer.
Posted by dogbird daily at 10:46 AM