Today was CDSP Obedience for Ein and...Molly! I finally stopped just thinking and dreaming about Molly in Obedience and went ahead and entered her in a trial. I even panicked and tried to scratch her from the trial, fretting that she was not ready, but between changing my travel plans and a lost email, Molly's entry in today's trial remained. (Since yesterday's agility trial was nearby to today's obedience trial, I got a hotel room in the area. And since Molly was with us anyway....)

Good thing I did! Molly stole the show today.

Today was a double trial and Ein got his turn first at Open A in Trial 1. Ein was "on" in heeling, even feeling great enough to forge a little bit. Running broad jump was good. We have had anticipation issues on the Drop on Recall and have worked on that since the last trial, but he stayed solid until I called him. ....And did not drop. Sigh. I feel his attention flickered towards the worrisome people at the doorway for a moment, just as I gave the command. Both retrieve exercises were perfect. Ein has a new dumbbell that is a better fit for him, but I still had it in my mind that he might not retrieve it under the stress of a trial. No problems there. No running around the jump either (that was last trial's screwball move!). The Go Out and Sit he boomeranged back to me and I sent him again and he went back out and sat. Okay! More to work on! A bummer since his Go Out was really nice at the last trial.

Molly got her turn second. Since I started doing CDSP with Ein and Perri, there was a new class added called "Starter Novice". I decided to enter Molly in that rather than the standard Novice class. Heel on Leash, Figure 8 on leash, Stand with Distraction (Judge circles your dog but does not touch her.), Recall (Half length of the ring.) and Sit Stay (while handler retrieves leash.) Molly heeled like a dream. She blew me away! Both on the regular heeling and the Figure 8. I have never enjoyed such a flawless Figure 8 pattern with either Ein or Perri. It was an incredible feeling. Molly held heel position doggedly, her tail was wagging. She sprinted in the fast pace but stayed right in heel position. I have done no extensive heelwork practice with her, just a lot of tooling around with bowl pivots and what we do waiting for our turns at agility trials and training. Which...when I think about it could be considered extensive. She understands heel position as solidly as Perri does, with none of Perri's stress. I wish I had a video. But I know how it felt and I will never forget it.

Ein loves heeling but he heels wide and often lags when he checks on the judge or spectators in worry. I never get that feeling of being 100% in sync with him, and I respect his concerns. You cannot fight fear. He loves heeling with me and wants to give me all of his attention, but he cannot ignore "threats". Molly is all bravado and confidence and it was a strange, beautiful feeling for me to actually heel a dog who I have trained well and who is totally in the moment with me. Wow.

The reason I wanted to scratch the trial was that I did not feel I worked Molly's stand-stay to fullproof. And we certainly have not practiced with other "judges", other than Vince. She stayed solid as a rock, not a foot out of place. Her recall was lovely, and her sit stay was solid. Molly scored a 198.5 and was awarded highest scoring Starter Novice dogs. There were golden retrievers in her class and my naughty pitbull mutt scored the highest. Floored. Who is this dog?!

Back to Ein, my angel, my golden boy...naughty again!! Great heeling, great running BJ but skipped front, this time anticipated the DOR. But he dropped! Great retrieves. Did his Go Out and downed instead of sitting. Oh Ein!

So our training will focus on Go Outs in more stressful environments. Same with DOR. I need to replicate the anticipating, as well as distractions as he is running and recalling towards me. Since I don't see, at this time, a suitable CDSP trial for us in my area until May, I want to try to get Ein to some matches where we can utilize "judge" pressure to help get Ein more solid in his problem areas. He used to have a very hard time retrieving around judges but he has conquered that (at least....for now!) so hopefully we can do the same with the DOR and the Go Out.

And Molly just powerhoused another beautiful for her second Starter Novice Q! One oopsie she did make was not sitting at halt for our first Figure 8 round. She did sit, with no command from me, but there was quite a pause before she did it. The judge deducted us 4 points for that, which I felt was a rather substantial deduction for a slow sit. Oh well. Everything else was beautiful! We got deducted 3 points for a slow finish on the recall, but I oddly do not remember a slow finish at all. I am very honest when there are faults made from my team, but I felt Molly had a very snappy finish and an instant response to my finish command. Again...oh well. 192.5 and a first place! 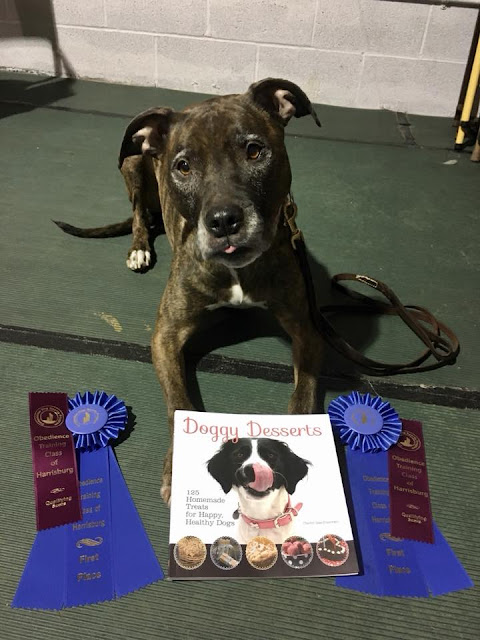 What an exciting day! The bottom line is that Ein was working really nicely despite his faults, I still had the sense he is settling into Open class and working better as we go along. And Molly blew all expectations out of the water. I look forwards to our next trial where I would love for her to title and move right up to Novice. We will practice so we are ready if that should happen.
Posted by dogbird daily at 4:32 PM