I don't know why but I have been looking forwards to 16 weeks for a while. 16 weeks just feels like a transition from tiny baby puppy to puppy-puppy to me! Maybe this is because Ein was 16 weeks old when I got him and was a perfect puppy. How silly is that! But Zorro is old enough to hold his potties for sure and accidents are rare. We had a poop accident after a hefty Friday evening wrestling session with my sister's golden retriever (and a Zorro owner who had more than enough wine to make her not vigilant 😀) and a weird incident of pooping on top of one of his tug toys last night. This latter incident that occurred after a particularly intense puppy agility class heavy with discussion about Zorro's lack of toy drive and I consider it to be not a potty accident but an artistic protest demonstration. The boy has spoken!

Toy play at home is great. Ball retrieving is really coming along. Zorro loves to fetch his ball and has really started to put it together than he will get to retrieve it if he brings it to me.
I have decided to start working with lotus balls and/or food pouch toys in Zorro's baby agility class. He was a quick study figuring out what Molly's lotus ball is all about and I think that it will be very motivating and fun for him.

No grooming this week but the ear project is going well! The tissue a bit deeper in Zorro's ears got a little red from the strips and so I applied a new set a little further "north" in his ears. Zorro gets very excited when he sees the Breathe Rite strip box (since he knows he will get paid for anything having to do with his ears.) The right ear definitely wants to stand more than the left. It was the first ear to start standing on its own and when I take the strips out to give him a break, the left one is always the first to flop down intermittently. The right one stays up more often than not even without the strips. We were able to go hiking last weekend only one time and Zorro was off leash the entire time and showing off his consistent and happy recall! Swimming is about the same. Zorro will do short swim outs after Perri as she goes after her ball but that is about all. Zorro has eased into the hiking puppy role very comfortably and it makes me so happy. He is easy and pleasant to bring along. 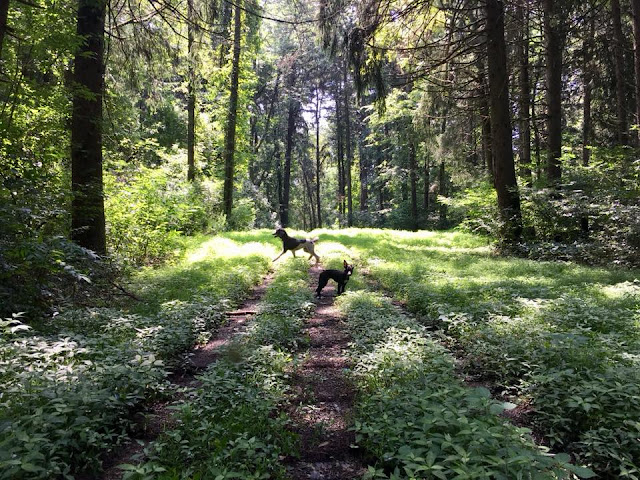 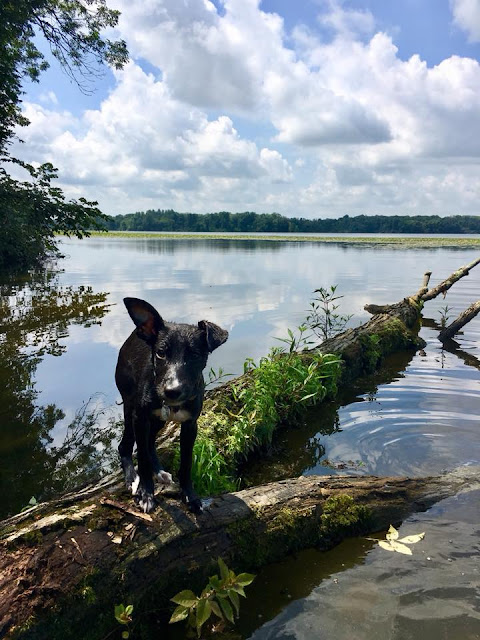 We also had a fun farm exploration opportunity with my brother in law! Zorro got to explore a welding shop, a farm with dilapidated equipment literally everywhere and he got to meet some horses, farm cats and goats. I encouraged him to climb on some interested and varied farm surfaces and substrates. All off leash and a very good puppy! Unfortunately I forgot my phone, so no photos. I am sure we will return there.
Posted by dogbird daily at 12:38 PM