Last week was the week of Ein's surgery. Anybody with multiple dogs can tell you it's "not that bad"...until one of them gets sick. You have a routine of managed chaos and when something gets thrown off, it can feel so overwhelming. That was the case when I brought Ein home last Tuesday, still half stoned from the anesthesia and with barely controlled pain from his incisions. Also, a pulled tooth that had to be sutured shut. 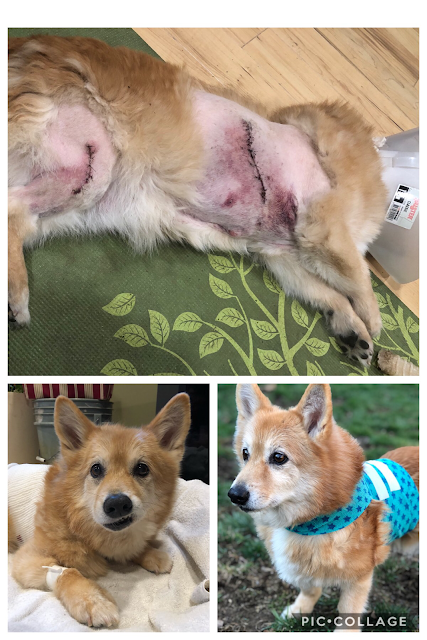 The girls settled quickly and were merciful to me. But the puppy simply did not understand. Obsessive sniffing of Ein that would not stop and boiling over irritating energy. Trying to pester the girls into rowdy play time that was not going to be allowed. And since I work an 8 hour day, it felt cruel to crate him after he had already been crated all day. We just did our best.

Ein bounced back with a vengeance the next day! He wanted food, he was sassy and his pain was much more manageable. His rib wound was wrapped with a pressure bandage due to the large incision. Ein did have some wound oozing, especially towards the bottom of the wound. We kept that wrapping on for 24 hours and then I changed it and rewrapped in much the same way. After that we tried a children's t-shirt. That was a waste of money and time. No matter how much I rolled the shirt up, Ein peed on it. He is a leg lifter but he is still a shortie! And to take the shirt on and off would have been more fiddling with his right front leg than I wanted to do.

By Saturday he had to go on cone of shame lock down as he will not leave his leg incision alone. This is really fun because Ein likes to sleep underneath my bed, but the bed is too low for the cone to fit under! That did not stop him from wedging himself under there and getting stuck. So now both sides of my bed have to be barricaded with random boxes and storage containers. I still hear him clanging around through the night, trying his best to see if he can still get under that bed. And he is an absolute battering ram menace with the cone. I thought Molly was bad! We are counting the days until suture removal next Monday!

I wish I had done this sooner. Oh, how I wish I had done it years ago! Ein seems to have so much more playful energy and his movement is so improved. I was so afraid of the anesthesia at his age but our vet did a wonderful job and he recovered so well. I think he feels so much lighter on his feet!
Posted by dogbird daily at 4:33 PM