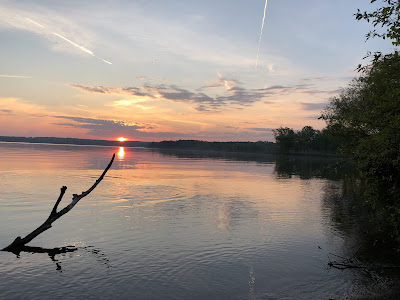 That was the view from my campsite on Sunday morning at Pymatuning State Park. What a great way to start the day!

The dogs and I were up early for the one hour drive into Erie, PA. Because what is a road trip without agility?? We arrived at the trial site with plenty of time. Perri was entered in P3 Jumpers, her first time in P3! And also the obligatory P2 Standard. The trial entry was light so we were not even there past 11am. Perri was stressed at the trial site, there were plain white walls which she always finds worrying as well as a lot of off leash fetch inside of the building and near the ring, and dogs that otherwise scared her.

Jumpers she started off slow and then got sassy and zoomy, which is typical of Perri when she is stressed but not entirely overwhelmed. In Standard she ran under the tire and I chose to just move on through the course anyway. Perri DID weave but very dependent on my motion and encouragement. The tire has become an issue again for Perri. I am trying to decide how much I actually care about this issue, since Perri is very much on a “whenever we feel like it” plan as far as agility goes and does not respond well to actual training goals. Anyway! The point was: “Just happy to be here, played some agility while on the road trip. CHECK!”

Our next stop was two of the most popular geocaches in our state! A virtual cache named “Auto Art” was first, with nearly 700 favorite points. Very fun! Next was the oldest geocache in PA, “State Gamelands 109”. The dogs were thrilled with a chance to run off leash after following the leash laws in all of the state parks we had been visiting! I of course could not find the “trail” that led to the cache so I hiked straight through the swamp and got my hiking boots soaking wet. But, I found it!! Now it was time to shift gears back to state park visiting. It was very sunny and hot so I took some time to hang my tent up and dry it out in the parking lot before moving on. We were to stay at a hotel that night so I didn’t want the tent to stay wet in the car.

And then it was off to Erie Bluffs State Park (with a stop at a local winery en route, I came away with their Cabernet blend.) The park was smallish with a lovely half mile trial out to an unmarked vista on the Bluffs, overlooking Eerie lake. The water was different shades of blue and really pretty. 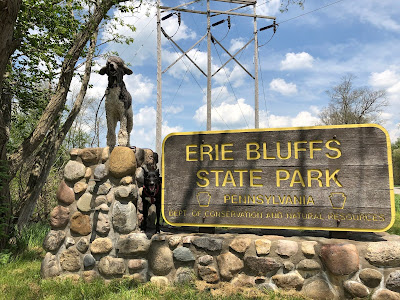 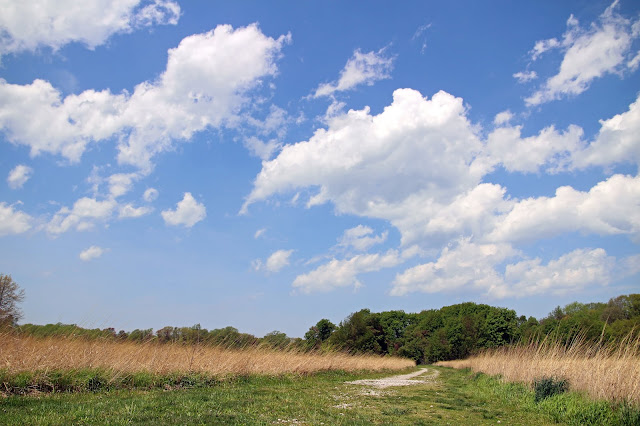 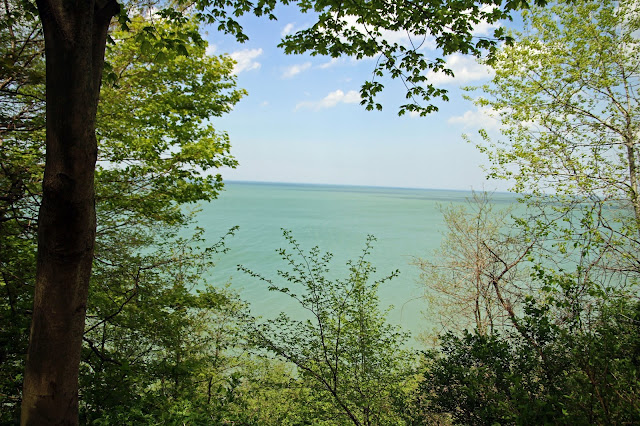 After that hike back in the car for our last stop: Presque Isle State Park and I planned to spend the rest of our day there. There were many geocaches, but my goal was to explore, let the dogs swim and with geocache priority on the virtual cache near the end of our loop drive around the isle. Presque Isle was VERY peopley, it is a gorgeous well maintained park and truly as good as going to the beach! The driveway in was two lane and reminded me very much of rush hour traffic! 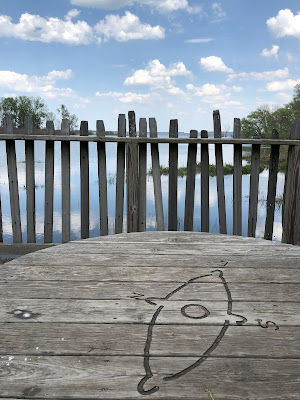 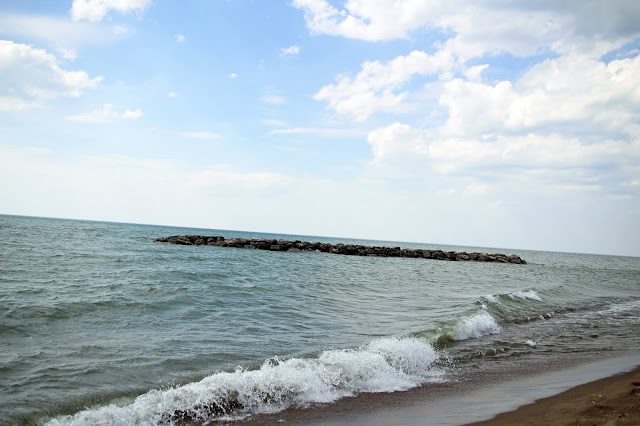 Regardless, I enjoyed my time there. I pulled over to check things out if I wanted to and most importantly, I found a spot on the beach for the dogs to swim and play fetch. Perri and Zorro are like fire and a match when it comes to fetch together though, since they both love to play keep away and chase. They are not good at containing themselves to the game! (Unlike Molly who is laser focused on fetch and only fetch) Still, they had a blast. My only regret was my camera wasn’t set up to autofocus as quickly as it is capable of, my fault, so I missed a lot of great shots due to them being out of focus. Bummer.) 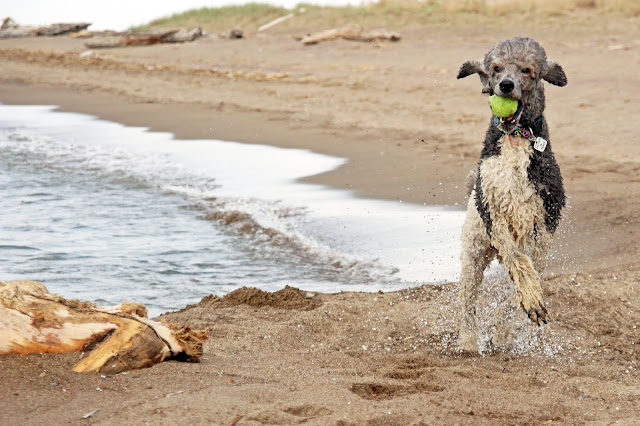 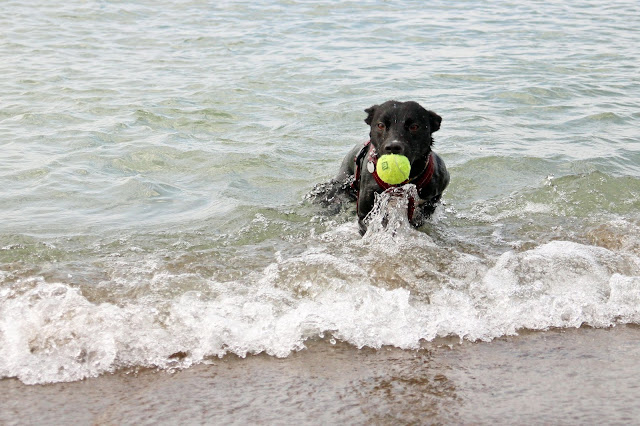 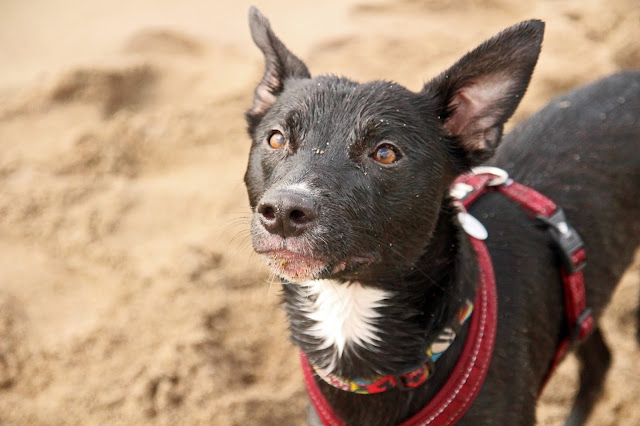 We ended our time at Presque Isle by visiting the Perry Monument, because I love virtual caches. And I am finding I am more interested in history as the years go by. The monument was in honor of Commodore Perry's actions during the Battle of Lake Erie. The monument area was beautiful and a storm was rolling in so it was windy but still lovely. Not ready to storm just yet. There were many people around but they were all relaxing people, enjoying and discussing the monument and asking questions about the dogs. Just Right. A perfect way to end our time in Erie.

We topped off the night by staying in a hotel room at my favorite Red Roof Inn instead of a tent. There were some storms and heavy rain overnight and that little room felt like a palace to me since I did not have to worry about the storms, or keeping the tent dry or packing it up in the morning. Ahhhh!
Posted by dogbird daily at 8:03 AM