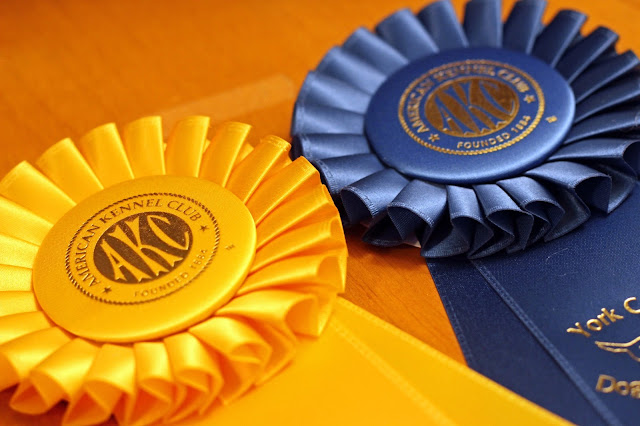 Today's trial was the first two legs towards Ein's Rally Advanced title.  The first course was excellent for Ein.  No "Stand", no left pivots.  Ein was focused and snappy and happy to be working with me.  We got a 95 score and placed first in Advanced A class.  I was thrilled!

I asked a fellow corgi lover to video our first leg for me.

All good things must come to an end.  And it was my fault.  I took Ein outside for a sniff and pee break and thought I would throw stick for him a bit, since he loves fetch.  Since in nearly eight years of him being my dog he has never hurt himself on a stick.
On the third throw he blasted away from the stick with his jaws held open, screaming in pain.  There was no stick wedged, there was nothing in his throat.  He quickly stopped crying and allowed me to inspect his tongue.  It has a small puncture wound and then underneath a small laceration.
NO MORE STICKS.  I cannot tell you how devastated I am that my own decision hurt my boy so much.

Ein was a little backwards-sneezy as he tends to get if he looks up too much.  I was sure that was caused by how he was holding his tongue due to the injury.

I decided to keep him in the trial and do the second leg.  He was working for me during practice times and still wanted treats and was attentive to me.  Ein's focus struggled for that leg, as I expected it would since he was not feeling well.  Of course the "Stand-Walk Around Dog" sign was in this leg.  And the "Halt-Step Right-Halt" (Ein does not do well moving laterally like that.)  He tried his best and we pulled off an 86 and third place.