Ein and I walked our final Rally Advanced leg this evening, with a score of 98!  So proud of my little guy.  We placed 2nd due to time.  The 1st place dog also had a 98 but was faster than us.

I had never been to this venue before, but I chose it because I was itching to get our last leg done for RA.  I drove across train tracks to get to the parking area (remember that.)  The ring was literally standing room only.  As soon as you opened the door, there was the ring a few feet away.  And entirely surrounded by the crating area and people.  My heart sank a little bit.  Ein is far from bullet proof when there are spectators at literal ringside.  There were no course maps available. While I was reflecting on no course map to be obsessed over and Ein's probable meltdown over the lack of personal space, I heard a deafeningly loud train roar by on the neighboring tracks.  I may be adding a dramatic flair to the whole thing, but I am pretty sure the training center shook.

I left Ein in the car until after my walk through.  And the course was not bad at all.  Only 11 signs.  ELEVEN!  After trialing APDT last weekend I feeling very much like, "That's it?"
The jump was there.  The Halt-Stand-Walk Around was there.  No hated Halt-Side Step Right, thankfully.  Ein did a beautiful stand and did not budge a paw for the walk around.  After a 270-Right he blew my mind.  He slammed into a play bow, then stretched out and yawned.  Ein does this when he is feeling silly and truly relaxed.  I just kept RIGHT on walking that course but I was inwardly laughing so much.  Look at my dog, acting like a clown in the middle of a rally course!

The end of the course approached ringside and PEOPLE! and he did a small shutdown while staring at them.  I clapped and said "Focus!" and he was back with me.  What a good boy :)

No trains were heard during our run.  Whew! 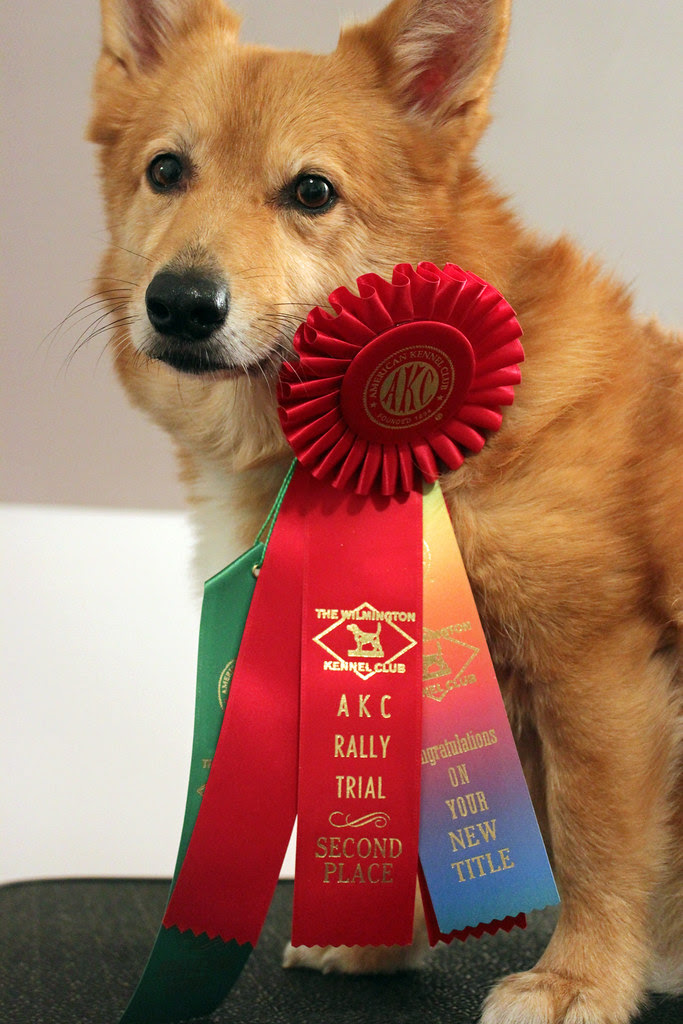 Posted by dogbird daily at 7:05 PM