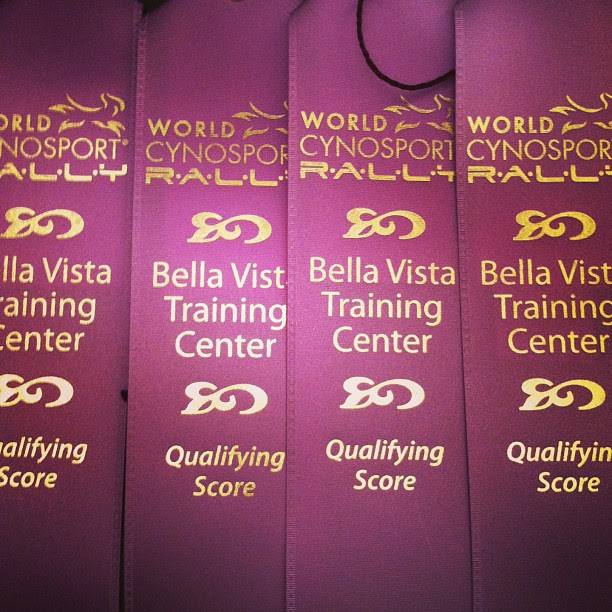 Ein and I trialed World Cynosport Rally-O tonight, two trials!  I entered him in Levels 1 and 2, that is a given.  We need those QQ's!  I was also ambitious and entered him in two Level 3 courses.  Hm.

Both trials were going on at one time, so we were running from ring to ring to do walk throughs and courses. I am tired!  Ein liked this venue, and I was happy for that.  It was Friday night, so it was a smaller entry and it was also relatively quiet.  That did not mean that Ein didn't do his normal staring off into space at random times, lagging and making me re-cue him.  But in general - we had a great time.

Level 3?  Oops.  We are not ready for Level 3.  We had the same directed jumping exercise that we NQ'd on at our last trial.  Ein is not remotely solid on that sign, in fact he just sits there and stares at me when we attempt it.  The other Level 3 course was *better*, and we would have Qualified except for...
The sign where you Stand Dog-Leave Dog-Turn and Down Dog-SIT DOG-Recall Dog-Finish.  Instead of sitting...Ein stared at me, then recalled when I re-cued.  Ah well.

We will be trialing at this venue again next month.  Two trials again.  NO Level 3.  2 more QQ's to Ein's ARCH.  Fingers crossed.
Posted by dogbird daily at 9:35 PM