In order to get an ARCH title, your dog must earn the Rally Levels One and Two titles.  Following that, at five different trials, you must enter both Level One and Two and qualify in both legs with a score of 190 and above each. (this is called a "QQ".)  Furthermore, you must earn 100 ARCH points, based on the scores that you receive.  A 191 would be one point.  A 200 would be ten points.  And so on.  You must earn 30 points from Level One, 30 points from Level Two, and the other 40 points can come from either level.
After last night's trial, Ein has 111 Level One points.  And he has...26 Level Two points.  Not enough.

We started working towards Ein's QQ's in March.  His first Level two score was a 195.  That made me a little nervous.  We needed to get higher scores in Level two, otherwise we would not get the required 30 points by the end of our QQ "gathering" time.  The next trial came in April.  That time we earned two QQ's, but with Level 2 scores that did not break 200.  "That's okay, as long as we get scores of 195 in each of the next two trials, we will be okay." 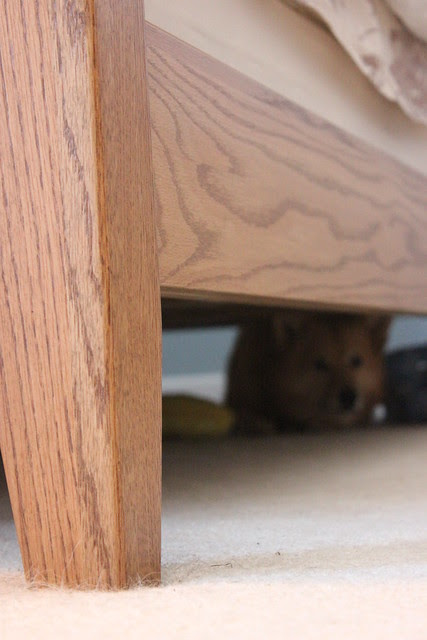 Last night was that night.  It was HOT.  I arrived Right On Time.  Ein stressed out majorly.   Nearly back to back we did his Level 2, then Level 1, then another Level 2 course.  They were agony.  He wouldn't sit at halts.  Double commands.  Staring into space.  Sniffing.  Lagging.  He almost refused the jump.  I was absolutely mentally drained by pulling him through the course and remaining upbeat.  It felt like I was out there for 40 minutes, when really it was probably no more than 3.  Those 195 scores that we needed?  We got 193's on both Level 2 courses, and that left us 4 points shy of Ein's ARCH.  That hurt.

When you do a sport with an Anxious Dog, the most rewarding thing is to see them blossom and actually enjoy working in a trial environment.  You work hard.  Things that are a cakewalk for a "normal" dog can take weeks or months of work for an anxious dog to achieve.  You take them to distracting and low level "scary" places so that they can learn to work through their anxiety.  You make them successful in tiny tiny steps to build their confidence.  You have a few good courses or runs, and you think that you might be Moving Forward.  But then they hear that one wrong noise: a cough, a fan, a dog or two barking at one another.  That weird tall guy with a hat.  That one intact dog that stared them down outside of the ring.  The temperature is too hot.  Too cold.  Too humid.  You ask them to do something that they always do, they fail to do so, and then they fall apart because they cannot stand to be wrong.  There is a mirror on the wall.  The room echoes.  The flooring is weird.  The simplest things send an anxious dog into a tailspin.  Things so simple that I cannot even figure out WHAT happened half the time.  And it is EXHAUSTING.  Exhausting because I worry that I am: torturing my dog, my dog is in pain, my dog hates what we are doing, my dog is miserable, my dog just wants to be left sleeping under the desk and in PEACE and my GOD! why did I drag him to trial after trial when it makes him so upset?

I quit agility with Ein because he plain did not like it.  It was terrifying for him.  And if it wasn't terrifying, it was confusing.  But he LIKED Rally.  I have preached up Ein's story before.  He went from a dog so anxious that he would hide behind me and shake whenever a person was around to a dog that will now sniff legs and allow himself to be petted.  His social anxiety is absolutely diminished, and that change came after we started training in group classes and going to Rally-O shows.  That is a fact.  I absolutely adore Rally-O and I would never want to push what I love onto Ein if he is uncomfortable with it.  In fact, I don't have to.  I have two other perfectly sane (I love you, Ein!) dogs that are happy to play Rally-O with me.  But all terror of my torturing Ein aside - those good runs are what I hold on to.  Later in the evening, Ein's light bulb went on.  Whatever was scaring him earlier was gone.  He pranced and smiled through the last Level One course of the night with me for his highest ever score of a 209.  What gives?

I decided at our last AKC Rally show that I would not pursue Ein's RAE title.  I have been planning to pursue the World Cynosport ARCHX title, however, and I do plan to work towards that goal (after the ARCH is earned...whenever that may be.)  After nights like last night I almost want to retire him after we earn the ARCH - but I feel this weird sense that I owe him to keep on going a little longer.  He has been a close and wonderful friend all eight years of his life.  I only wish that we had started sports much sooner.  It has been wonderful to watch him come out of his anxiety, slowly but surely.  To that end, it is all the more heartbreaking to see him backslide.  But I will take the good with the bad - Ein is a good little partner and he gives me everything that he can when we go in the ring.  It is my job to accept what he can give me as Good Enough.


And speaking of my other perfectly sane dogs... Perri had her two trials in the Level One Rally-O ring last night!  I entered her because: I really do love Rally, and because I wanted to be able to manage her heeling in the ring a little bit more - to give her more (fun) ring experience.

She was heavenly.  I felt very guilty, but I had a lot more fun with Perri last night than I did with Ein.  Her first course was a 207/210, perfect but for me having to re-cue her on the Bonus Exercise.  Halt/Leave Dog/Call Dog to Heel.  She remained in her Sit-Stay when I called her, so I had to ask her again.  Her second course was a 209/210, one point lost on a tight lead because she went to investigate a mosquito that was flying around.  I'll take it, Perri.  Good girl!

Posted by dogbird daily at 6:43 PM